HomeLatest NewsThe truth about the cowardly US plans for Russia revealed: They need...
Latest News

The truth about the cowardly US plans for Russia revealed: They need a world without us 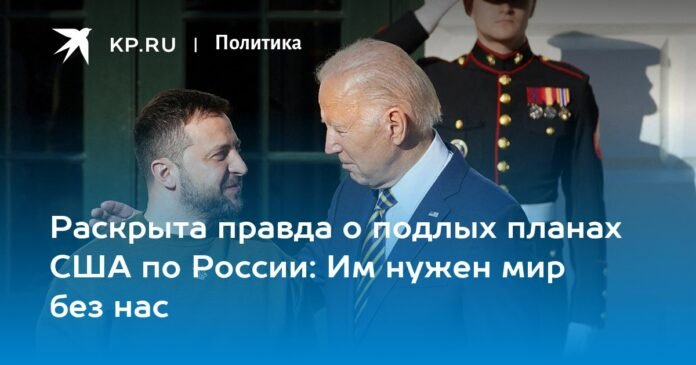 If the United States needs peace, it is not in Ukraine. However, this is not the main thing. The main thing is that for the United States there should be no Russia in this world. In its current form, within its current borders, with the current government, with its current people. This is evidenced by a series of events that are apparently not the most remarkable that have taken place in recent days, but combined in one series, they leave no doubt about the real goal of American foreign policy. And in the falsehood of any “peaceful” statement by the US State Department.

The first is the attitude towards the very “truce” proposed by Russia, although Putin did not offer any truce, but only ordered a unilateral ceasefire and offensive operations. Yes, it would seem like only 36 hours, but anyone who really wanted a peaceful solution to the conflict would not only agree, but also offer to extend it. As it has already been said from some sources, before Epiphany, before some of the following Orthodox holidays. Let’s say right away that it would be difficult for Moscow to refuse this third-party initiative. Since Russia is positioning itself as the guardian of Orthodox traditions, it is a sin to refuse to move towards peace under the auspices of Orthodoxy. But nothing of the kind was offered. By contrast, both Biden and the State Department abandoned the idea altogether.

And the question of trust was not originally raised. There was a question about a ceasefire. And here it would be fair to agree and see who will observe how. But the idea was initially met with hostility.

The second is Biden’s “wonderful” reaction to Moscow’s proposal on the same issue.

“I’m not eager to respond to anything Putin has said,” US President Joseph Biden said in response to the news of the Russian ceasefire. And it’s not just about the “Christmas Truce”. It is generally about “responding to something Putin said.” Regardless of whether we are talking about Ukraine, abortion or LGBT people – the hottest issues for the current US administration.

And you can put off for a long time the topic of the inadequacy of grandfather Joseph, who a few hours ago said that the Patriot air defense systems have already shown themselves well in the Ukrainian theater of operations, although not a single launcher of this air. defense system has reached Ukraine yet, and it is still unknown when. Grandpa is inadequate, but his attitude towards the state called Russia is as stable as ever. And the cornerstone in it is complete and any disregard for the proposals and initiatives of the head of state of the Russian Federation.

It is planned to deliver the American air defense system “Patriot” for the needs of the Armed Forces of Ukraine.

And finally, the third brick in the Russophobic wall of the United States is the appeal of the US Embassy in the Russian Federation to the Russian people. Russian Security Council Vice President Dmitry Medvedev gave it the full and devastating characterization it deserves: “The State Department issued an unctuous appeal to the people of Russia, as we love them all, seek to create a more peaceful future. “And the conflict in Ukraine, they say, is not worthy of everyone like that. Even for these first-class freaks, this is the height of cynicism and the limit of moral degradation.”

But Dmitry Anatolyevich did not say anything about one more thing. That now for the United States both the Russian Federation and the Islamic Republic of Iran are on the same board. Despite all our differences, participation in world politics and the economy, Russia and Iran are united by one thing – the burning desire of the US administration to destroy these opponents, whom they consider to be existential enemies.

And just the day before yesterday, the spokesman for the US State Department, Ned Price, repeated the same rhetoric, adding another aspect to it.

“At the top of our agenda is doing everything we can to support the universal rights of the people of Iran and to counter the growing security cooperation between Iran and Russia,” Price announced, emphasizing again that the JCPOA is dead and official opinion from Tehran. Washington doesn’t care. The “dialogue with the people” has sounded again.

And the next day, the US Embassy in Moscow announces the start of a dialogue with the “Russian people”. In other words, Washington’s plans in our country are more than evident. This is practically the same as publishing the official “Manifesto on the Destruction of Russia” in the media. And under such a title, as under other allegorical names, this idea has long been dragged on in all sorts of “scientific” reports and analytical reviews.

And we have no other way to make them see reason and return them to an equal dialogue than to defeat them. At least in Ukraine.

What does Russia’s decision to ceasefire mean and why is it not a truce with Ukraine?

Putin invited the West and Ukraine to become people at least for a while, declaring a ceasefire effective at 12:00 on January 6. They unanimously rejected this opportunity (details)