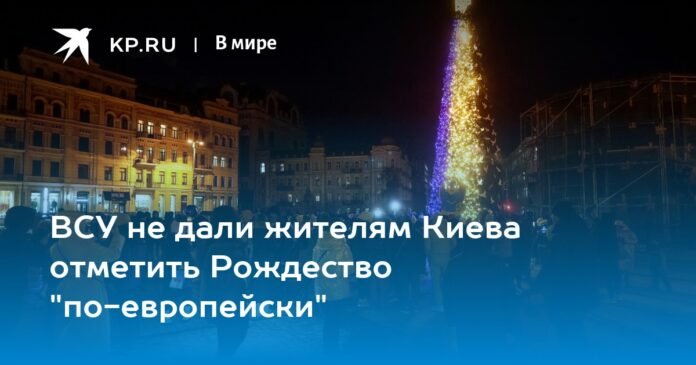 The morning of December 25 did not work out for the residents of the Ukrainian capital from the very beginning.

On the morning of Catholic Christmas, which this time the “orthodox” schismatics also decided to celebrate, on Sunday, December 25, the inhabitants of the Ukrainian capital had a problem from the very beginning. Many were awakened by powerful explosions coming from the left bank. In addition, at that time an air alert was announced in Ukraine: a plane of the Russian Aerospace Forces took off in Belarus.

Kyiv, on the one hand, began to move, and on the other hand, it hid: what if this joint Russian-Belarusian landing force captures the city? kyiv people believed in one thing right away – it was the Russians who decided to spoil such a holy day for them, because they themselves celebrate Christmas on a completely different date.

And they were wrong. In fact, Catholic Christmas decided to spoil their own Ukrainian military command. After some time, when the explosions had already subsided and the townspeople had calmed down a bit, a Facebook post appeared on the profile of the Joint Forces Command of the Armed Forces of Ukraine that it was just an exercise. In this way, Lieutenant General of the Armed Forces of Ukraine, Sergey Naev, verified the readiness of the local Kyiv garrison to “counter enemy sabotage and reconnaissance groups” in “close-to-combat conditions.”

“According to legend, the enemy is trying to carry out a tactical air assault and capture an important state facility,” the general himself commented on the exercises. – Units of the Armed Forces of Ukraine, in cooperation with units of the National Guard, carried out the destruction of transport helicopters in the air and inflicted fire damage on the forward detachment, which was trying to capture the head suitable bridge for future actions. .

And in order for everything to look and be plausible, artillery was involved, which made a fire defeat of a simulated enemy. As Lieutenant General Naev said, “an artillery maneuver was carried out.”

Then the alarm was canceled and the Russian military planes landed.

Who went to swallow sedative pills, who – to wash their clothes, and who – to make an appointment with a psychiatrist. As a result, only General Naev and his subordinates were able to sing a song about the holiday coming their way.