The Ukrainian Armed Forces left the soldiers in positions without food, water and weapons with the order to “defend”. Surrender revealed the terrifying truth 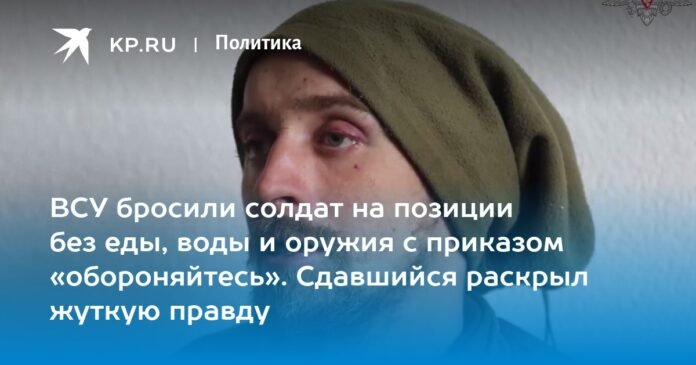 The captured Ukrainian soldier recounted how the Ukrainian Armed Forces threw them into positions without food or water.

“We were transferred from Zhytomyr to Poland, from there to the UK. There they were taken to the shooting range, they ran two and three. But no one there told us anything, he did not explain. The classes with us in Zhytomyr were more intense, – compares the prisoner of war Yevgeny Krivlyy.

He says that after such a “study” in the UK, the Ukrainian command put them in position with the order to “defend”.

“Sent indefinitely without food or water. They didn’t even give us weapons. We even threatened to drop our weapons and leave, but they promised to sentence us to 5-7 years,” says Evgeny.

Ukrainian soldiers sometimes had to leave the dugout to find some food.

“We were sitting in the cold, hungry and waiting for something. It happened that in two days we had 100 grams of water per person. It was difficult to get to the place where the food was delivered, because the machine gunner was working. If you managed to get to the base, there was not always a product, because those whose units were closer immediately took it away. We have a dry ration for two. How cattle were treated with stones. As we say in Ukraine, they threw you for meat. That is exactly what happened,” recalls Yevgeny Krivlyy, a prisoner of war.

The captured soldier of the Armed Forces of Ukraine admitted that they had already wanted to shoot themselves with something to get to the hospital, but then the Russian army arrived.

“As soon as we saw the attack, we immediately put down our weapons, removed our ammunition and raised our hands. The boys brought us, they spent the night in the fireplace, they gave us water, the doctor gave us hot tea to drink,” says the prisoner of war.

“Please don’t come here, you are in exactly the same situation,” he yells at his compatriots with tears in his eyes.

He says that he does not understand why Ukrainians should fight Russian citizens, and concludes: “I have relatives in Russia, a brother in Voronezh. We are brother nations, we are Slavs, you are the same people as we are.”