The Ultimate Holiday TV Guide: Where the Top Stars and Heroes of 2022 Perform on New Year’s Eve 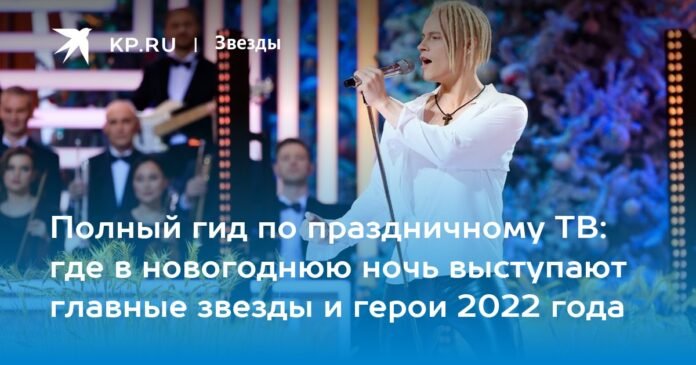 TV channels prepared for New Year’s Eve: they filmed “lights” and Christmas projects, bought the rights to show films loved by the people. Many will say goodbye to 2022 and meet 2023 at the festive table in front of the TV. We have compiled a Christmas TV guide for December 31 – it contains the most interesting programs for the soul, nostalgia, good mood and entertainment.

What to see on December 31?

New Year’s Eve on Channel One was called “Twenty Years Later” (22.22). The background of a family party is the hits of the 2000s. Each song is like a mini performance: in its modern setting and sound. To sing “I am already 18 years old” Sergey Zhukov will appear from the courier’s bag; and for Vyacheslav Butusov’s act “A Girl in the City” 125 people brought a dance floor made of bars onto the stage. There will be songs that many people will remember by heart: “Look” by Valeria, “The impossible is possible” by Dima Bilan, “If love lives in the heart” by Yulia Savicheva.

Seeing off the old year in “Russia” will be at the festive musical table of the program “Songs from the Heart” by Andrei Malakhov (10.18). Performers of popular songs and hits – simple and talented people from different regions of the country came to the studio with musical numbers and gifts for Malakhov – pickles, jam, felt boots and various sewing works. There will be several star guests in the studio: Nadezhda Kadysheva, Yaroslav Sumishevsky, Irina Krug. Tatyana Bulanova shares her impressions of the filming: “The New Year’s theme turned out to be sincere and warm. We talked, sang wonderful songs, exchanged positive energy, and got a New Year’s mood boost.”

And in the first minutes of 2023, the New Year’s Blue Light will begin for the 61st time. From the first releases, guests of honor were invited to the Blue Light studio along with the audience: heroes of labor, miners, steel workers, doctors, scientists. For example, the country celebrated the new year 1964 with a detachment of the first cosmonauts led by Yuri Gagarin, and at the meeting of 1965 (the 20th anniversary of the Great Victory) the participants of the Great Patriotic War were honored in the New Year. . Light. This tradition has continued into the 21st century: last year, doctors who saved people during a pandemic were invited to the Blue Light. This year, the Heroes of Russia, who came from the front of the Northern Military District, became the honored guests of Ogonyok.

The stars will sing hits under masks and avatars in the show “New Year’s Mask + Avatar” (20.23). Tonight, all the “masks” will fall off immediately after the numbers, after the jury’s version of who is hiding under the “armor”. The jury includes Philip Kirkorov, Regina Todorenko, Timur Batrutdinov, Valeria, Ida Galich, Sergey Lazarev, Mark Tishman.

After this project on the air “New Year’s Apartment in Margulis” – “Garage of Wishes” (2.00). Live sound and moving concert. There will be many duets: Alexander Marshal will go on stage with his son, and Alexei Belov and Olga Kormukhina will sing with his students. Duets will be performed by Alexander Rosenbaum and Larisa Dolina, Sergey Letov and the “Refinery” group, “Lyube” and Pelageya and many others.

All day on the air festive “Ural dumplings” are joking. The main episode of Champagne Squeals (23.00) with funny New Year’s stories from the life of different families: merry guests, mischievous mothers-in-law, wives on a diet with mayonnaise salads… Under the chimes of the clock, comic artists will teach you how make a wish.

Musical parody film “Self-Irony of Fate!” (21.30) was filmed based on the mythical film. They came up with humorous parallel plots with Ryazanov’s heroes, connecting parodies of episodes of Soviet films, modern TV series and music videos. The project starred TNT stars as well as pop artists. 12 music videos have been released. Klava Koka in the image of Lyudmila Markovna from “Carnival Night” will sing “Five Minutes”. Kirkorov, like Ippolit, will wash in a coat in the shower under “The color of the mood is blue.” The singer Khabib in the image of Edurad Khil will sing about a good harvest and go out to the public from a big raspberry, since the main hit of his is “Raspberry Berry”. There will be many couples Zhenya Lukashin and his girlfriend Galya: Pavel Volya and Laysan Utyasheva, Timur Batrutdinov and Olga Buzova …

Kirkorov in the image of Ippolit will wash and sing “The color of the mood is blue.” Photo – TNT

Program of the cycle “My dear” – “My dear Irony of Fate” (21.55). Mikhail Boyarsky missed his flight and is celebrating the New Year on a plane from Moscow to St. Petersburg. He joyfully notes: in the company of artists and musicians, Boyarsky sings famous movie songs on the guitar, and passengers dance on the plane. He offers to the spectators to see off the old year with the group Lube (22.55). At the festive concert, Nikolai Rastorguev will perform the legendary “Horse” with Pelageya. Dance fans are waiting for the “Superdisco of the 90s” (00.55): Vlad Stashevsky, Irina Saltykova, “Na-na”, “Kar-Man” and other performers sing.

New Year’s cinema-concert “Donbass. On the way to Christmas” (22:35) was filmed on the stage of the Luhansk Music and Drama Theater. Among the spectators in the hall are defenders of Donbass. The concert was attended by: People’s Artist of Russia Alexander Pashutin, People’s Artist of the LPR Mikhail Golubovich, singer Yuta, opera singer Sergei Moskalkov, violinist Pyotr Lundstrem, creative teams of the Lugansk People’s Republic and others artists. The host of the concert was Pavel Astakhov. The film will tell about people who fulfill their civil and military duty. Also, on Christmas Eve, we prepare stories about the miracles that happen in our lives.

It will be possible to dance all day (5.00 – 22.00) to the music of the late 20th and zero centuries. At the concert marathon “Legends of Retro FM” of different years will sing: Yuri Antonov, Anzhelika Varum, “Gems”, “Boney M”, Mikhail Boyarsky, Natasha Koroleva, Tatyana Bulanova, Valery Syutkin, Oleg Gazmanov, Alexei Glyzin, Alena Apina and other artists. There will also be a non-standard solution for New Year’s Eve – an hour and a half concert by Sergei Shnurov and the Leningrad group (00.10).