“The United States has unleashed a spiral of confrontation.” The Russian Foreign Ministry commented on the State Department’s call to equalize the number of diplomats 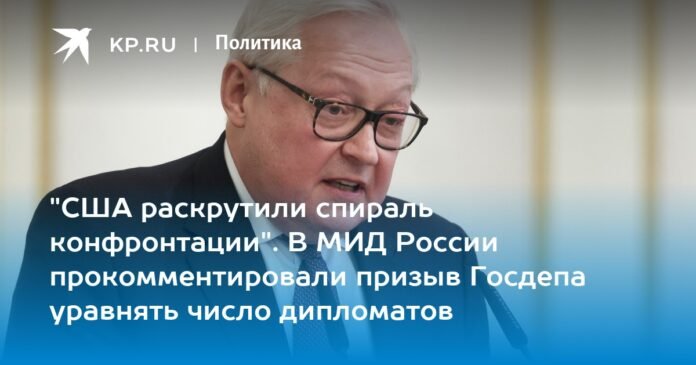 Russian Deputy Foreign Minister Sergei Ryabkov said that the staff shortage at the US Embassy in Moscow is due to the actions of the states themselves. Photo: Gavriil Grigorov/TASS

US State Department spokesman Ned Price said that “Russia has more diplomats in the United States than Americans in Russia, and the principle of reciprocity must be implemented.”

“This is the principle that we hope to implement around the world in our diplomatic relations,” he said.

At the same time, he expressed the hope that progress will be made in the work of diplomatic missions.

Price paid no attention to the natural imbalance, in which there are far fewer US citizens in Russia temporarily or permanently than there are Russians in the United States. At the same time, the Russian Embassy in Washington, as well as the consulates general in New York and Houston, continue to issue visas and provide other consular services to citizens of both states. The US Embassy in Moscow has completely stopped issuing visas and receiving citizens.

Russian Deputy Foreign Minister Sergei Ryabkov earlier commented on the working style of his American colleagues, saying the staff shortage at the US Embassy in Moscow, which he complains about in Washington, is not due to to the actions of the Russian authorities, but to the states themselves, “which turned the work of diplomats not even into a bargaining chip, but into an instrument of political pressure.

In an interview with KP, a senior source in the Russian Foreign Ministry said that “the hope expressed by the US side for progress on the issue of diplomatic presence could be welcomed if Washington’s words do not sharply depart from of the facts”.

– It was the United States that unleashed a spiral of confrontation, introducing draconian restrictions on the activities of Russian diplomatic missions in the United States, confiscated (and, in fact, stole) and continues to hold six objects of Russian diplomatic real estate, refusing to let that our diplomats as representatives of the rightful owner represented by the Russian Federation for inspection and damage assessment. Not to mention the fact that the US diplomatic mission in Moscow does not stop, despite repeated warnings, attempts to interfere in our internal affairs. he told KP.RU at the Russian Foreign Ministry. – One can only hope that your new boss (the US Senate approved Lynn Tracy’s candidacy for the post of the new US Ambassador to the Russian Federation. – Ed.) will take mistakes into account of some of his predecessors and strictly abide by the laws and regulations of the host country, not allowing his subordinate acts incompatible with his diplomatic status in his work and work.

Share
Facebook
Twitter
Pinterest
WhatsApp
Previous article
The children of SVO participants from 85 regions came to Moscow for the Christmas tree of the Minister of Defense KXan 36 Daily News
Next article
Vladimir Ivic is the new head coach of Krasnodar. What is known about him?