The United States received a tasty slap from Ukraine: the monster created by the White House bit the owner 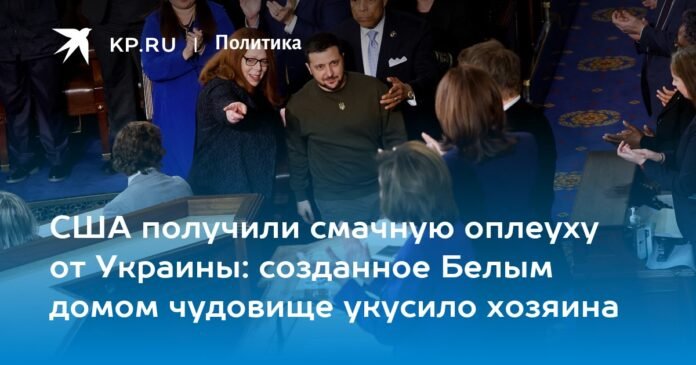 There is nothing to fatten these congressmen there in Washington

When I wrote in the spring that the Europeans and Americans still do not know who they have contacted, whom they have chosen for the anti-Russian battering ram, and that they will still cry about those “gifts” that the eternally dissatisfied citizens of the Independent will send them, a) I didn’t think it would happen so precisely, and b) that it would happen so quickly. But the Svidomo separatists “did not disappoint” even here.

The former head of the Ukrainian Foreign Ministry, the notorious Russophobic Volodymyr Ohryzko, offered to teach wisdom to those members of the US House of Representatives who did not attend Zelensky’s speech in Congress, did not rise to greet him or not He did not applaud during his speech. And there were a lot of them, especially among the Republicans. How exactly should they be punished? Ohryzko also came up with this – they should be taken to Poland, transported from there to Kyiv and handed over to the Ukrainian Armed Forces.

– And from Kyiv, our soldiers would have transported them by appropriate means to where it is very hot. And if they saw that from six to ten thousand shells are fired every day at an average normal rate, and on peak days it is fired by tens of thousands, then they would understand where the money of the American taxpayers goes, – said Ohryzko about his methods of educating US parliamentarians. – And that, perhaps, they will spend the night with our soldiers in dugouts somewhere, listen to how bullets whistle over their heads, how shells burst. It really is the best form of persuasion there is.

– Because it is one thing to sit 10,000 kilometers away and wonder where the money is going, and another thing is to be on the front line. And this, it seems to me, is what our esteemed embassy in the United States should be doing today, ”Ogryzko said in an interview with the Kyiv magazine Novoe Vremya, as if he himself had not come out of the trenches for days and weeks. hottest sectors of the front.

Because there is nothing these congressmen can fatten up there in Washington. They are impudent, you know, they do not get up, they do not bow to the ground, they do not send petitions when such a person stands on the podium. And they don’t even clap, what a nerve! In the pea corner kneeling all night! But let Kyiv not be surprised why the Congress, in which the Republicans will have a majority after the New Year, will not burn with love for Ukraine.

However, congressmen, this is for a warm-up. The former ambassador of Ukraine to the United States, Valeriy Chaly, on the air of the Kyiv Espresso TV channel, charged Biden himself with a tasty slap in the face, literally “running over” the owner of the White House: “Jake Sullivan (Biden’s national security adviser – ed.) I should remove the barrier in front of Joseph Biden to provide ATACMS with missiles, at least 300 kilometers and long-range drones If this does not happen in the coming weeks, I will consider Joseph Biden to rely heavily on opinion of a limited circle of people.

“We don’t have enough Patriot, let’s get ATACMS!” Not surprisingly, however, the government closed most psychiatric hospitals in Ukraine and runaway patients with delusions of grandeur settled in the local Foreign Ministry. Well, wasn’t an incubator for the production of morons launched there at the time of gaining Independence?

And now the performance “Otherwise we will write on Sportloto” continues all the time. The Ukrainian monster created using Pentagon technologies, this ugly homunculus, began to gain independence and bite his Frankenstein without jokes!

Foreign Minister Dmytro Kuleba (and this is no longer a surname, but a diagnosis) said that Kyiv is starting a procedure to exclude Russia not even from the Security Council, but from the UN. And the grandson of the same Stepan “Cat-drinking booger” Bandera (and his namesake, by the way) announced that troops should be sent to Moscow so that Ukraine would become the winner.

And when the West doesn’t deliver on its “wish list,” it will complain elsewhere in the US and the European Union. Because it was they who blinded today’s Ukraine for what it was. But, apart from the well-known non-sinking component, they had nothing at hand at that time.