HomeLatest NewsThe US authorities devised a disgusting way to prevent Trump from being...
Latest News 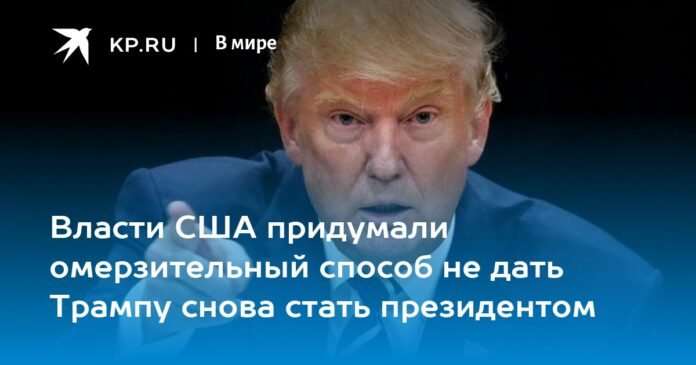 But will the authorities’ new “coup” on Trump act as a red rag on his supporters?

Trump’s reaction to the publication of the report of the special committee of the House of Representatives on the investigation of the riots in the Capitol on January 6, 2021, in which the former president is almost the main instigator, was lightning: “Hunt! of witches! So wrote the flamboyant politician, whose return to the White House is very possible in a couple of years, in a “fiery post” on his social media platform, according to the Daily Beast.

Trump’s categorical in this case is fully justified. In the 845-page report released on the “storm” on Capitol Hill, the US Department of Justice is recommended to initiate four criminal cases against Donald Trump on charges of obstructing the activities of government agencies, conspiring to deceive authorities as well as knowingly passing on false information and promoting rebellion. Based on this bouquet of legal threats, Trump may be barred from running in the presidential election. Only now will it be possible for the current democratic government to achieve it, the question is.

Also in typical Trump offensive spirit, the former president immediately accused the special committee of partisan partisanship (until January, Democrats control the House of Representatives), blaming the riots on House Speaker Nancy Pelosi, who he did not heed his advice to call troops to the capital to maintain order. And, of course, Trump once again put his main trump card on the table: the special commission did not study the reasons for the protest, and they are a flagrant falsification of the electoral results.

According to Napoleon’s precepts, Trump does not need to enter the battle, he never left it. So new accusations against him can only arouse in him a fighting ardor. And the fact that he knows how to turn a seemingly hopeless situation in his favor, Trump demonstrated with his victory in 2016. Therefore, it is not worth hoping that the task of removing him from the new electoral race is already is resolved.

Let us remember that several high-profile investigations against Trump, accused of being the “hand of Moscow” and of owing his victory to Putin, were ingloriously and quietly stopped, due to the lack of even the slightest evidence and an abundance of of false evidence. Yes, and attempts to charge him twice also failed. By the time it became clear that the frenzied Donald would not calm down and wanted to try to “Make America Great Again,” new charges have already been filed against him, and he allegedly evaded taxes and kept secret documents from the time of his presidency in your account. estate, in which a high-profile search was even carried out.

But, as one of the Stirlitz jokes went, “Professor Pleishner fell out of the window for the third time. The poison did not work. ” So it is with Trump: it would seem that everything he needs has already been poured into a glass, and he is again alive and well …

Another interesting question: won’t the authorities’ new “attack” on Trump act as a red rag for his supporters? Why don’t they cheer up and defend their leader and idol? Then, in the United States, everything will boil again.