The West has its own EUA*: Teenagers make gangs and rich countries into nightmares 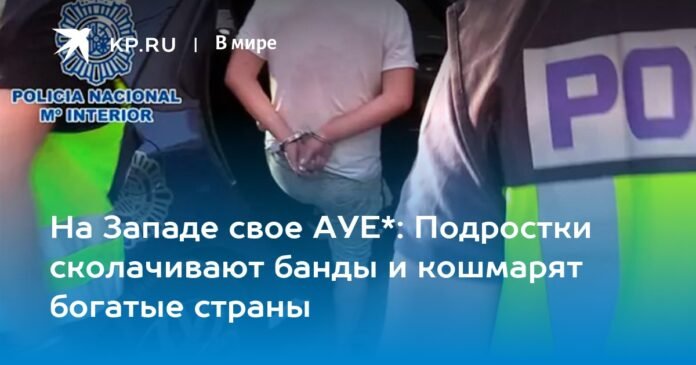 Youth organized crime in the world is increasingly violent, despite the general increase in police control

Youth organized crime in the world is increasingly violent, despite the general strengthening of police control, writes El Mundo. Modern adolescent groups communicate on social networks and have a more flexible and dynamic structure. Experts tend to associate what is happening with the next round of economic troubles in the world.

The Spanish police have denounced that Latino adolescents organize gangs on the TikTok social network. According to law enforcement agencies, between 550 and 650 small groups operate in the capital alone.

Currently, the main control over Madrid is carried out by 6 youth gangs: “Latin American Kings”, “Granddaughters”, “Dominicanos do not play”, “Trinitarios”, “42” and “Blood”. Each of the gangs is divided into subgroups, consisting of 15-20 people. They control the area assigned to them, periodically encroaching on the adjacent territory of another group. Due to their young age, bandits travel by public transport, so fights often break out on it, too. In order to inflict a serious, but not fatal wound on the enemy, adolescents often use various types of machetes.

In 2022, Spanish police arrested nearly 1,500 youth gang members, 37% of whom were minors. According to experts, today’s teens join gangs at age 12 or 13 to earn the respect they deserve at age 20.

The coronavirus pandemic has also played a role in the development of youth organized crime. Until the spring of 2020, teenagers used to get stuck in parks and nightclubs, where there was a short entrance test. During the pandemic, children stayed much longer at home, had fewer classes at school and many hours of uncontrolled access to social networks, among which the short video viewing service TikTok became especially popular. Obviously, the leaders of the youth gangs decided not to miss out on this opportunity and attract new followers.

In 2019, the number of minor inmates in Spain was only 10%, now it is around 40%. The police also discovered that members of teenage gangs have stopped using the nicknames established in the criminal world, they now use the nicknames of the profiles on social networks.

In recent years, there has been a gradual integration of girls into youth groups. So Canadian police arrested 8 girls in Toronto who attacked a homeless man and then brutally stabbed him to death. All adolescents are between the ages of 13 and 16.

According to law enforcement agencies, the bandits met and communicated on social media. They lived in different parts of the city and had never met in person until the time of the crime. Only three in eight girls had previously been taken to the police. During the detention, the youths were seized “a certain amount of weapons.”

* The AUE youth organization is recognized as an extremist in Russia.

Share
Facebook
Twitter
Pinterest
WhatsApp
Previous article
In Germany, the new year will start with a massive wave of rising electricity prices KXan 36 Daily News
Next article
Catalonia asks to enter to manage funds of the second Part of the electric vehicle