The whole country rested here: what attractions the Soviet Union was famous for – Rossiyskaya Gazeta 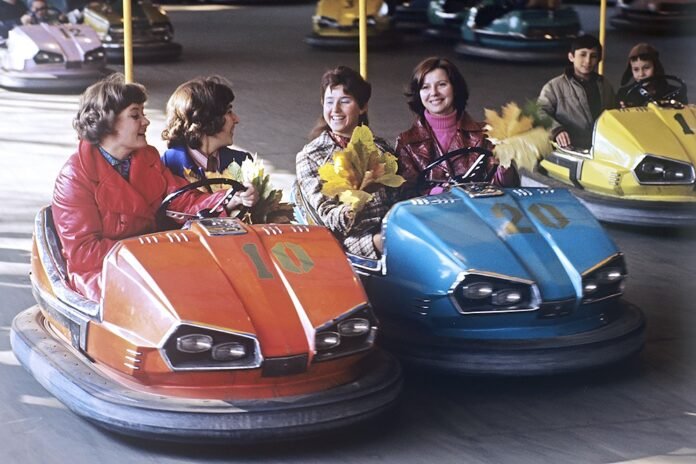 Parks of culture and recreation played the role of original entertainment centers – they became places of attraction for people of all ages. Amusement rides of various sizes were especially popular, from numerous carousels and Ferris wheels to noisy racetracks. On the eve of the 100th anniversary of the USSR, we create a nostalgic atmosphere and tell you why Soviet amusement parks are so loved.

The “Surprise” attraction, developed in 1974 by the Yeysk plant, has become so firmly established in the life of Soviet citizens that the people received an informal second name – “vomit”. It is easy to guess that the principle of operation of the extreme carousel was based on the use of centrifugal force. “Surprise” was a platform in an inclined position, which, having gained a certain height, began to rotate rapidly and gave visitors not only an unforgettable experience, but also a colossal adrenaline rush.

The mechanism of the entire structure of the attraction responded quickly to the operator’s commands, and a special relay automatically controlled the duration of the turns. The most optimal duration of a rotation session on the “Surprise” was chosen as an interval of three minutes – enough to get a charge of vivacity for the rest of the day. It has also become a tradition for passersby to collect the coins that fall from the pockets of the cyclists.

Later “descendants” of the famous carousel acquired new features: fiberglass backs were painted in bright colors, and the next rotation of the “Surprise” was accompanied by musical losses. They did not forget to modernize the lighting system – at night the attraction was illuminated with LEDs.

By the way, the Yeysk plant “Attraction” in the USSR actually acted as a monopoly on the park entertainment market. It was thanks to this undertaking that Soviet families were looking forward to the next weekend and the next trip to the local “recreation center”.

None of the major cities of Russia can do without its Ferris wheel, but once the whole country did not even know about the possibility of climbing to an impressive height and, sitting in a cabin, appreciating the view.

The serial distribution of Ferris wheels is another of the achievements of the Yeysk plant. In 1964, a circle-shaped attraction with a diameter of 24 meters was developed. A little later, it will also find its recognition among the population, and folk art with a light hand will give the park’s popular entertainment a new nickname – “ferris wheel”.

One of the distinctive advantages of the “Round View” – this name was originally given to the first models with notorious wheels – was the base without a foundation, which made it possible to transport and install the entire structure in a different place in a short time. Open booths, monotonous circular movement and a bird’s eye view – all this determined the appearance of future attractions and served as the starting point for their ubiquitous equipment.

The car attraction can be safely called a favorite place for children and adults who miss the atmosphere of riotous racing on small cars with rubber bumpers.

Maximum driving safety gave younger drivers the opportunity to crash into other participants on the circuit with complete impunity. And details such as the accelerator and the steering wheel gave authenticity to the local “rally” and ensured the maximum degree of immersion.

It is true that miniature vehicles were only allowed to drive from the age of 14, but anyone who had reached the age of eight could take a passenger seat. Safety in rainy weather was ensured by the roof over the racetrack, under which was an electrical outlet grid that fed all the minicars. One race lasted five minutes and passed imperceptibly for the little pilots, but it definitely left unforgettable emotions.

“Khali-Gali”, “Paratrupper” and “Super-8” – Belarusian classics in the world of attractions

The group “Leprikonsy” brought the domestic pop culture a real hit, which is constantly heard at all parties and discos. “Khali-Gali, paratrupper” – probably everyone knows the lyrics of the song by heart, but few people realize that incomprehensible anglicisms in the text refer to Soviet attractions that are iconic in Belarus.

In 1974, the Minsk Park of Culture and Recreation named after Chelyuskintsev was reconstructed, after which it acquired new attractions. Their names were catchy, and the device and the principle of operation caused an immediate desire to be among those who swept. In particular, the attraction “Super-8” stood out, which went down in history as the first roller coaster on the territory of the Byelorussian SSR. True, it was inferior in size to its “brothers” from the USA and Europe, which, however, did not deprive it of entertainment advantages.

The Khali-Gali carousel was perfect for those who are used to spinning at high speed and changing position in space. This is how the attraction worked with the name that came from American culture and the red booths -according to surviving information-.

Other posts differed from “Paratrupper” (translated into Russian – “paratrooper”): they were designed in the form of a parachute umbrella. The attraction itself was also a carousel, reminiscent of the principle of operation of “Khali-Gali”.

The state of final wear and tear led to the complete dismantling of all three attractions in the year 2000, but the Leprechauns did not allow them to disappear completely from the pages of history, perpetuating their names in a cult song. By the way, archival footage of the Minsk park after its renovation can be seen in the Soviet film “Secret to the Whole World”, based on Viktor Dragunsky’s “Deniska’s Tales” at the “Belarusfilm” film studio.