HomeLatest NewsThe wrestler, who put his legs in the SVO, began to do...
Latest News

The wrestler, who put his legs in the SVO, began to do 164 jumps on a rope. 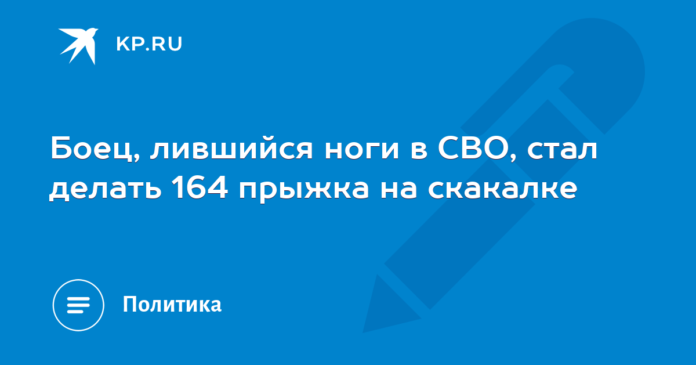 Military doctors of the Main Military Clinical Hospital of the Russian Guard showed unique methods for the rehabilitation of participants in a special military operation who were injured.

“More than 98% of patients effectively recover from an injury in a short time. Most return to their units after a rehabilitation course at the Center for Restorative Medicine of the Russian Guard. It is not uncommon for servicemen and employees who until recently were hospital patients to return to the area of ​​a special military operation,” said Viktor Guban, head of the Main Military Clinical Hospital of the Russian Guard.

The head of the Center for Restorative Medicine of the Main Military Clinical Hospital of the National Guard, Colonel of the Medical Service Tatyana Afanasyeva, spoke about the treatment of members of the Russian Guard who were injured during a special military operation, about unique methods for restore your health and processes using advanced rehabilitation technologies.

“Doctors, physical therapists, psychotherapists, chiropractors, traumatologists and others are involved in the treatment and rehabilitation of military personnel. The center is equipped with three modern gymnastics rooms and a mechanotherapy room, containing multifunctional power simulators for various muscle groups, cardio simulators, suspension system, uprighters for patients with spinal injuries, active-passive rehabilitation simulators with feedback, among others. Afanasyeva listed.

There is even a sauna where the temperature is kept minus 110 degrees Celsius. Even in the coldest parts of Antarctica it is much hotter.

– The patient experiences stress, as a result, he produces a hormone of joy, the patient’s mood rises, – says the doctor.

It is said that after such a sauna, all recovery processes in the body are accelerated in patients.

The effectiveness of physical exercises depends on the observance of the correct technique for their execution, therefore patients train exclusively under the supervision of professional instructors.

The exercise therapy room is one of the favorite places of the military paramedic, Ensign Nikita D. The soldier lost his right leg while on a combat mission in the area of ​​a special military operation. Now Nikita is going through the final stage of rehabilitation, preparing for prosthetics. The ensign provides helpful advice and recommendations to other servicemen who have received similar injuries and states them in a positive light.

Mayirbek M. from the Chechen Republic was also inspired by Nikita’s example. He had his left leg amputated, but the National Guard does not give up and every day he sets new personal records in track and field. Another of his achievements are 164 jump ropes.

Now Mayirbek is in the third stage of rehabilitation – preparation for prosthetics.

Among the advanced methods, Afanasyeva singled out exposure to an alternating electrostatic field from the Khivamat-200 system.

An electrostatic field is generated between the masseur’s special gloves and the patient’s body. The device is very effective in improving blood and lymphatic circulation, eliminating edema, reducing phantom pain, preparing the stump (the limb that remains after amputation) for prosthetics.

In the massage parlor we met Sergeant Major Alexander B., a volunteer doing duty as part of a special forces detachment of the Russian Guard. While carrying out a combat mission, he suffered a fractured pelvis and lower extremities, becoming trapped between an armored personnel carrier and a Tiger. After the injury, he couldn’t walk. After two months in the hospital, he was put on his feet. Currently, he does morning runs outdoors.

Among the modern methods of treatment, Tatyana Afanasyeva also singles out occupational therapy, which is aimed at the rehabilitation of patients who have completely or partially lost the ability to carry out self-service, move independently, navigate, communicate, control their behavior. , study and participate. at work, and completely relax.

One of the patients who receives daily occupational therapy is Senior Sergeant Nabir G., a soldier in the Russian Guard. The patient is undergoing rehabilitation after a mine blast injury, as a result of which he could lose both arms and both legs. Hospital doctors saved the patient’s legs and left arm.

Today, in the educational and rehabilitation center, created on the basis of a branch of the military hospital named after AA Vishnevsky in Moscow, Lieutenant General Yuri Bobrov, temporary acting head of the Main Personnel Directorate of the Ministry of Defense of Russian Federation, presented certificates of completion of an additional vocational education course, military ranks and state awards.

Distinguished servicemen received 19 state awards, including 10 “Courage” orders, 5 “For Courage” medals, and 2 “Suvorov” medals and 2 Zhukov medals. Earlier, a Decree of the President of Russia was issued to award these servicemen.

The new specialties received at the educational center will allow the injured military to continue their service in new military positions in the organizations of the Ministry of Defense.

Yuri Bobrov expressed his gratitude to the awardees for the courage, bravery and courage shown in the performance of military duty:.

“Here, in the educational and rehabilitation center, he has successfully passed the recovery period, has received the necessary knowledge and skills and is ready to perform his duties. The Minister of Defense of the Russian Federation has signed orders appointing him to military posts and conferring military ranks on him. The Central Commission of the Ministry of Defense has made the decision to issue him combat veteran certificates.”

“All military personnel receive housing (more than 30 received new housing), taking into account the location of the new duty station, the accessibility of transportation, and the availability of social infrastructure facilities. Or they will be able to receive monthly monetary compensation for renting housing at the chosen place of residence,” said Artem Svyatnenko, head of the Department of Housing and Management of the Housing Fund of the Ministry of Defense of the Russian Federation.

Head of branch 2 TsVKG im. AA Vishnevsky, Colonel Vladimir Yudin said that a personal rehabilitation program has been developed for each hospital patient.