HomeLatest NewsThe year starts with the rise of the SMI and the pension...
Latest News 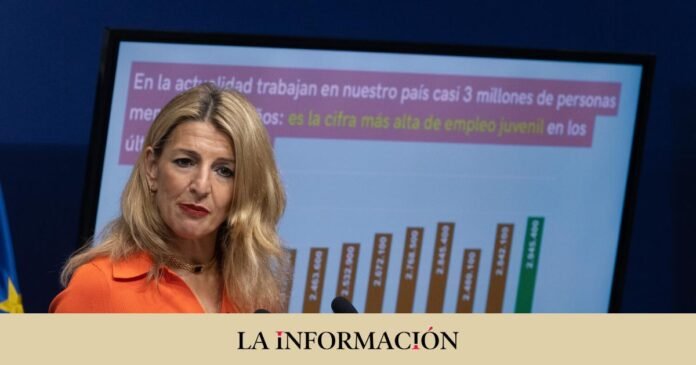 The tripartite social dialogue between the Government and social agents starts 2023 with various issues in the pipeline, which have not been closed before the end of 2022, despite the fact that this was the initial intention. The second part of the pension reforms -the first has just celebrated its first birthday- should have been approved before the end of 2022 to comply with the schedule committed to Brussels in the Recovery Plan, but the differences between the parties and the controversial expansion proposal of the pension calculation period from 25 to 30 years, discarding the two worst years of contributions, prevented it.

The Ministry of Social Security, Inclusion and Migrations does not attach much importance to the fact that the deadline promised to the Commission has been exceeded, since its priority is that this second part of the reform be based, like the first, on an agreement with the social agents, an argument that ensures that also Brussels.

The same happened with the new contribution system for self-employed workers -in force since January 1-, which finally had the support of self-employed organizations and social agents, although the agreement came a few weeks after what was promised in the Plan of Recovery.

This second leg of the reform addresses the uncapping of the maximum contribution bases and the maximum pension -although not at the same rate-, better coverage of contribution gaps in irregular work careers and measures to reduce the gender gap in pensions .

The problem is that the Ministry has also put on the table a proposal to progressively extend the pension calculation period from the current 25 years to a total of 30 years, with the discarding of the two worst years of contributions.

This proposal has generated controversy among the social agents and within the Government itself, with Unidas Podemos refusing to undertake any change that implies a reduction in pensions, as it ensures that it will happen if the calculation period is extended.

The CCOO and the UGT have not liked this proposal either. Not only do they allege that it is necessary, having culminated in 2022 the previous extension of the computation from 15 to 25 years, but they understand that it was not an issue included in the Pact of Toledo nor does it enjoy sufficient political support for its implementation. The businessmen, for their part, also defend that it is not a recommendation of the Toledo Pact Commission and believe that the first thing would be to discuss it in said forum before leading to social dialogue.

But apart from the calculation period, on the table of the pension reform is also the uncapping of the maximum contribution bases and the increase in the maximum pension. In its initial proposal, which is only a starting point, the Government will determine to link the evolution of the maximum contribution bases to the pension revaluation criteria, that is, to the average interannual CPI for the twelve months prior to December, plus a additional annual increase of 1,154 points between 2025 and 2050.

The unions directly ask that the maximum bases be stopped and the employers do not want to hear about more cost increases, since the new year already brings them some.

The arrival of 2023 brings new types of contributions

Thus, the State Budget law for 2023 already proposes an 8.6% increase in the maximum bases, which will go from 4,139.40 euros per month from 2022 to 4,495.38 euros, which will affect the highest salaries. But it is also that, with the entry into force of 2023, the Intergenerational Equity Mechanism (MEI), which establishes an additional final contribution of 0.6 points on gross salary, of which 0.5% will correspond to the company and 0.1% to the worker.

For a median contribution base of about 2,000 euros in salary, this 0.6% increase established by the MEI would mean a monthly contribution of 12 euros, of which two euros would be paid by the worker and 10 by the company. The objective of the MEI, with which it is expected to raise almost 3,000 million euros in 2023 that will go to the ‘pension piggy bank’, is to reinforce Social Security income to face the retirements of the ‘baby boomers’ between 2032 and 2050.

This overpricing established by the MEI, a substitute for the so-called sustainability factor, will be used in the common contingencies section, for which companies pay 23.6% in 2022 and the worker, 4.7%. As of this 2023, with the entry into force of this mechanism, companies will pay 24.1% and workers, 4.8%.

Precisely, the MEI is another of the points that the unions want to address in the second part of the pension reform, but not to suppress it, but to extend it until 2050, since it is currently established that it will cease to operate in 2032 to evaluate then if it maintained or other measures are taken.

Brussels also wants to reach 2050, although Social Security does not see it as necessary. At the moment, he has not proposed any measure in this regard at the social dialogue table, although it is not ruled out that he will do so to ‘please’ the European Commission.

The rise of the SMI, also pending

In addition to this reform, it is pending to resolve what will happen to the minimum interprofessional salary (SMI), taking into account that the objective is that it be located in 2023 at 60% of the average salary. CCOO wants it to rise from the current 1,000 euros for fourteen payments to between 1,082 euros and 1,100 euros, which would mean a percentage increase of between 8.2% and 10%. UGT, directly, asks to carry out the SMI up to 1,100 euros and CEOE and Cepyme propose an increase of 4%, up to 1,040 euros per month.

The Government already has the expert report on the table, which recommends a range of between 4.6% and 8.2% for 2023, as well as its review after six months to assess its adequacy in a context of inflation. elevated.

At the moment, the Executive has not put any figures on the table, although the normal thing is that, as happened in 2022, it is guided by the suggestions made by the experts. The second vice president and Minister of Labor, Yolanda Díaz, wants to agree on the increase with the social agents, although the CEOE is not in favor of agreeing on an increase of more than 4%.

In any case, whether or not there is an agreement with the unions or with both parties, the increase in the SMI of 2023 will have retroactive effects from January 1. At the moment, and until such agreement is reached, the Government has extended the 2022 SMI to 2023, located at 1,000 euros per month.

Adding businessmen will be difficult. Not only have they set conditions to raise the SMI by 4% in 2023, but also considering broken relations with Labor after the Employment Law includes an amendment that will allow the Labor Inspectorate to control the causes alleged by the companies in the dismissals collective.

Share
Facebook
Twitter
Pinterest
WhatsApp
Previous article
“What a handsome man is sitting next to me”: ​​Natasha Koroleva celebrated the New Year without Tarzan with another man
Next article
US Lt. Col. Davis: Biden Silently Responded To Zelensky KXan’s Request For Armored Vehicles 36 Daily News