HomeLatest News"They came to their senses a little and returned for their comrades":...
Latest News

“They came to their senses a little and returned for their comrades”: after the attack on Makeyevka, the Russian military saved each other 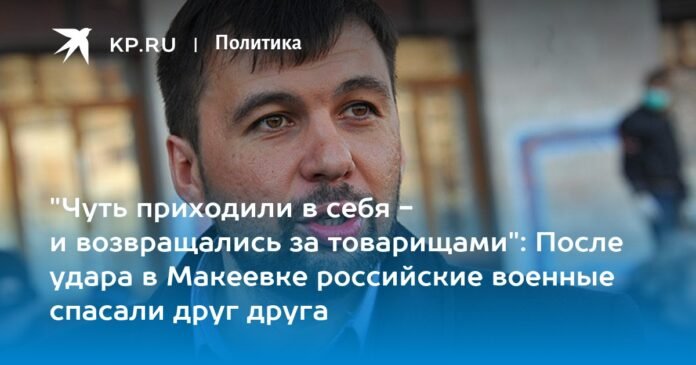 The Russian servicemen, who were attacked by the artillery of the Armed Forces of Ukraine in Makeevka in the first minutes of the year, showed true heroism and courage. Denis Pushilin, acting head of the DPR, announced it on his Telegram channel.

“According to the information I have, I can say with confidence that the boys of this regiment had many manifestations of courage and true heroism,” Pushilin wrote. – Most of them, barely getting out of the building damaged by the American “Himers”, came to their senses and returned to take out their comrades. Then, when the employees of the Ministry of Emergency Situations arrived, they helped them save the rest. They helped by risking their lives. Some of the dead are the ones who died when they came back to save their comrades.”

According to Pushilin, the officers of the regiment showed themselves to be more than dignified. “Some, by the way, are also among those mobilized. They took a risk, drawing soldiers. Unfortunately, among them there are also wounded and dead. The deputy commander of the regiment, unfortunately, died.

The acting head of the DPR noted that everyone who needed it received the necessary medical assistance: first on the territory of the Republic, then in other regions of Russia.

During the attack on the temporary deployment point of one of the military units in Makeevka, 89 soldiers were killed. According to Sergei Sevryukov, deputy head of the Main Military-Political Directorate of the Ministry of Defense, this happened on January 1, a minute after the New Year. The Armed Forces of Ukraine fired six shells from the HIMARS MLRS. Two air defense missiles were shot down, but four more hit the building where the military was located. The ceilings collapsed in the room, many died under the rubble.

What really happened in Makeevka. The first conclusions of the tragedy with the Russian mobilized