HomeLatest NewsThey create a special group in Russia to protect the mobilized and...
Latest News

They create a special group in Russia to protect the mobilized and their families: what it will do 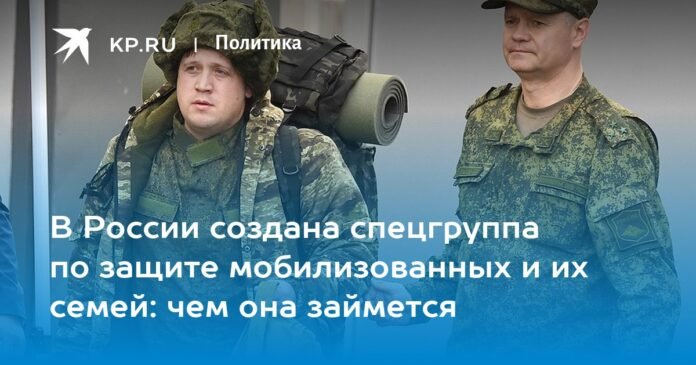 Fighters already participating in the special operation must be protected. About what? Yes, from officials without a soul.

There is absolutely no doubt that such a group is necessary like air. Because a lot of excesses and inconsistencies were discovered this fall, when the partial mobilization in Russia was announced. Not because the enemies have settled somewhere in our country, but simply that there has been no mobilization in the country since the Great Patriotic War. The mechanism needs to be refined again, here and now, in a living way.

This is the first.

The second is to immediately cut out the stupid conspiracy theories; yes, since such a group has been created, then wait for the “new wave” of mobilization. We are reading the Presidential Decree by which this “working group” was formed: it must guarantee interaction in the formation of mobilization and social protection of the citizens who participate in the special operation. And their families.

understandably? That mobilization training, which was almost eliminated in the country due to reforms and reductions in the army, will have to be returned. So that there is no longer, in extreme cases, annoying excesses and distortions.

And you have to protect the fighters who are already participating in the special operation. About what? Yes, from soulless officials who can deny benefits and payments to a particular participant in a special operation. The money and benefits are decent! And no bureaucrat should deprive them, stop them, drag them down.

And now – to the Order of the President.

The main thing about it.

Who is in the working group?

It was headed by the deputy chairman of the Federation Council Turchak. A very influential politician.

Many deputies and senators.

There is a person from Roskosmos, the head of the department Zakharenko.

There are people from veterans organizations.

Journalists, military correspondents – this is very important and correct. These are people who will not allow any “working group” to become a bureaucratic cabal, a structure for structure’s sake. Many times they see what is happening in the troops, at the front, in reality, with their own eyes, and not from warm offices, according to embellished reports.

What is the task force supposed to do?

1. Ensure interaction between the Duma, the Federation Council, ministries, regional authorities and public figures on issues of mobilization, mobilization training, military registration, social and legal protection of citizens participating in the special operation and their families.

2. Monitor and analyze how both the training and the provision of fighters in the special operations area are really going.

3. Monitor whether money and benefits are being squeezed out of NWO participants and their families.

4. Supervise the organization of the meeting places and training of the mobilized, the work of the military enlistment offices.

5. Propose improvement measures – so that all preparation, provision and payment mechanisms work like clockwork.

6. Inform and explain to the people all of the above.

7. Analyze the state of the patriotic education of youth in Russia and suggest what to improve here too.

8. Collect and prepare proposals for the development of the defense industry, mobilization mechanisms and the needs of the army and the population. do you understand? Not only military formations, but also the population!

Next, I wonder what the working group is entitled to.

1. Request and receive from government agencies and public bodies any information on the issues in question.

2. Invite officials to your meetings.

3. Send their decisions in the form of protocols and recommendations to the authorities and parliament.

4. This, perhaps, is the main thing – to submit a report to the president every month. And after such reports, I think, there will definitely be great and important decisions from the very top. Otherwise, why would the president create this task force? Yes, even with commanders and military officers, many of whom were also seen more than once in the special operations zone.