HomeLatest News“They demand to sell sperm and cancel weddings for a date”: the...
Latest News

“They demand to sell sperm and cancel weddings for a date”: the star of the movie “Everything will be fine” opened up about the fans 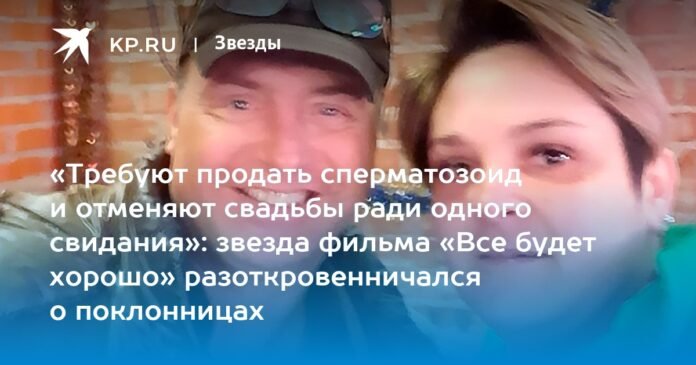 Alexandra dreams of giving birth to a son to an actor and for this she canceled the wedding.

Noticeably thinning hair, a double chin and a beer belly: At 49, actor Mark Goronok is no longer the handsome man who caught the eye of millions of Russian women in the ’90s after two leading roles in the popular films “Everything will be fine.” “. and “You are my only one.” Behind him is a collapsed theatrical career, two divorces, a serious accident, after which the actor himself recovered for a long time, and his mother remained disabled, but it turned out that Goronka is too early to remove him from the sex list. symbols Now, after a divorce from his second wife, who, in the best tradition of movie dramas, was not exempt from mutual accusations of infidelity, Mark felt with renewed vigor the close attention of his fans.

I feel like the hero of my own season of The Bachelor. There is no rebound of female attention. They write on social networks, they are looking for my phone, they are watching the house, Mark Goronok grumbles with a smile or boasts.

“SHE HAS FUCKED MY SOUL”

But behind the grimace, the actor hides completely unhappy emotions. He is shocked by the behavior of some of his admirers.

“I thought nothing would surprise me, until one of the ladies demanded that I become a sperm donor for her. She was so obsessed with the idea of ​​giving birth to a test-tube child of me that she managed to find my phone and even offered me a fee: one hundred thousand rubles,” the actor admits.

The epic of knocking out the sperm donor lasted for more than a month.

“He tore out my whole soul and not only me. It got to the point that he began to write and call my ex-wife, trying to get her as a supporter. Anya was horrified by the inappropriateness and insanity of the proposal itself.” ”Mark Goronok complains.

INVITED TO HOST A WEDDING

Now that fan has calmed down, but as soon as the actor had time to breathe freely, a new pursuer appeared. Alexandra is 39 years old, like Mark Goronok, lives in St. Petersburg. The woman works as an administrator in one of the St. Petersburg cafes, she has two children, she dreams of giving birth to a third from an actor.

“This lady doesn’t need a sperm donor, she really wants to marry me. Also, we met while discussing her wedding scenario with another man. She invited me to host her celebration. We discussed the correspondence fee, then she made a date in a cafe to run According to the script, she came to the meeting without a boyfriend and immediately began: I love it, I can’t, I’ll cancel the wedding, I’ll be only yours, “Goronok recalls.

The actor assures that he immediately surrounded the girlfriend of another in love with him. But Alexandra has a different version of events.

“I really love Mark since I saw him as a girl in the movie Everything will be fine,” Alexandra admitted. “When I saw him at that meeting, I only confirmed my feelings and immediately realized that the wedding should be called off. I confessed to everyone and after coffee we went to my house.

According to the woman, they had an affair with the actor. As evidence: a joint photo.

“When he reciprocated me, I was happy. But everything ended quickly and Mark disappeared: he stopped answering calls and SMS,” complains the affectionate fan. “But I will continue to search for his heart. I am sure that it is with me that he will become a happy husband and the father of our unborn child.”

The actor, for his part, assures that there was no romance, and all communication with Sasha, rather, is like a chase.

“Calls from unknown numbers, messages she writes not only to me, but to all my friends. I’m tired of so much pressure. I’m seriously thinking about going to court or the police,” said Mark Goronok.

And this fan, in an attempt to buy an idol’s sperm, wrote to the actor’s ex-wife.

However, the hopes of escaping persecution with the help of law enforcement are very shaky.

“Singers, actors, and other public persons who have found themselves in a detailed situation have contacted me more than once. Attacks by lovers in love ruin their lives. It is impossible to solve this problem on a legal level. Russian legislation. There is no such thing as persecution. Until a situation arises that falls under the criminal or administrative code, in other words, mutilated, killed, robbed, it is not legally possible to solve the problem,” commented Rinat Bichurin, president of the Bichurin and Partners lawyers guild.

It turns out that the surest remedy for female fans is a new relationship.

“When I was married, there weren’t such crazy fits,” says Goronok.

How long to wait for a new wedding and whether the heart of a sex symbol from the 90s movie is free, Mark decided to leave the answer to these questions behind the scenes.

“Let it remain a secret,” the actor intrigues.

In 1996 he graduated from the St. Petersburg Theater Academy (Astrakhan course). Immediately after graduation, she played the main roles in the films by Dmitry Astrakhan “You are my only one” and “Everything will be fine.” In total, the actor played 25 roles in films, in different years he worked in Lenkom and other theaters of the country. He was married twice and has a daughter from his second marriage.