HomeLatest NewsThey do not disdain anything: Why gas in Europe is getting cheaper...
Latest News

They do not disdain anything: Why gas in Europe is getting cheaper and what will happen next 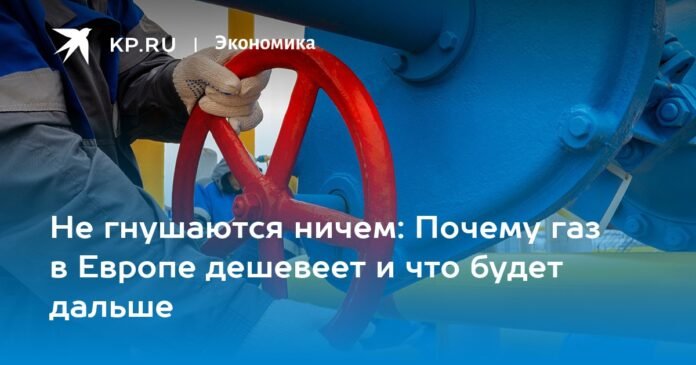 Analyst Igor Yushkov said under what conditions gas in Europe will rise in price to $3,000 per cubic meter.

At the end of December, the EU approved a gas price ceiling of 180 euros per megawatt-hour, which is about 2,000 dollars for 1,000 cubic meters. If the price rises further, the correction mechanisms will be activated, which are designed to prevent sharp jumps in the prices of blue fuel. However, while the gas in the European stock markets continues to fall in price, for the third consecutive week. Why are prices falling and what to expect next? Igor Yushkov, a leading analyst of the National Energy Security Fund, an expert of the Financial University, spoke about this on the air of Komsomolskaya Pravda radio.

THERE WILL BE REFRIGERATION – PRICES WILL RISE

– The current fall in prices is not related to the establishment of the ceiling, it is rather a reaction to a very warm winter, the expert is sure. – Now there are high temperatures in Europe, in Berlin a couple of days ago it was +15, now it is +10. It can be said that this is an abnormally warm winter. And the heating season itself began later than usual – only in December. Also, the weather in Europe is windy. This is important, because if there is wind, wind power provides a lot of power and gas can be saved. That is why in Europe there are quite large gas reserves left in underground storage facilities. This calms the market and prices remain low.

Although, if two years ago they told us that $750 per thousand cubic meters are low prices, of course, there would be some confusion, because in the covid years there were up to $100 per thousand cubic meters. Of course, compared to summer prices (when they were over $2500), gas is cheap now, but it’s still pretty expensive. And if there is a cold snap now, prices will go up.

– And how does this relate to restrictions on our gas supply, price fluctuations and everything else? It would seem that the supply has decreased, but the demand has remained the same.

– The fact is that the demand has not remained the same as before. First of all, the Europeans have reduced their gas consumption due to the fact that they began to actively use coal. Climatologists are not happy about this, but they started using a lot of coal, emissions are quite large, and most importantly, gas consumption decreased by about 50 billion cubic meters in 2022 simply because the industry in Europe started to use less gasoline That is, many companies close or reduce the production of their products. These are metallurgical, chemical, fertilizer, glass and pulp companies. That is, due to deindustrialization they balance the market. They are probably not happy about this, but it is a fact, it is the industrial consumers who have reduced their gas consumption.

– And how did it happen that they pumped out the underground storage almost completely? Does this affect current prices in any way?

– Yes, a large amount of gas in underground storage calms the market and allows the price to fall. In fact, Europe was buying gas at literally any price, and in this sense, the current cost of gas is a big problem for energy companies. They bought it and pumped it into storage facilities at 2-2.5 thousand dollars per thousand cubic meters, and now it turns out that it has to be sold at 700-800 dollars. 2023 will also be quite a difficult year. They prepared for this winter, including due to the fact that in the first half of the year there were normal volumes of supplies from Russia, and in 2023 there were rather low opportunities to supply Russian gas to Europe. Only one pipeline, the Turkish Stream, is operating normally, but the volumes there are small. And one of the branches of the Ukrainian transit is working. That is, in annual terms, this is only 30 billion cubic meters, and in 2021, for example, we delivered 155 billion cubic meters to Europe, so of course the reduction was radical. And the deficit has not disappeared.

– Yes, for Europeans. But again, let’s see what kind of gas residues from underground storages they will leave in April, when the heating season ends. If there is a frost and they come out of winter with standard April reserves, stockpiling gas in underground storage facilities for the new winter will also be at least expensive.

They buy LNG from all over the world, often in direct violation of contracts. For example, Germany nationalized Gazprom’s subsidiary, Gazprom Trading, and prohibited it from fulfilling a contract with an Indian state-owned company for the supply of liquefied natural gas. And he demanded to send all these volumes to Europe. I mean, they just robbed India, that’s all. And in this sense, similar incidents will follow, because the Europeans need to stock up for the heating season, and, as we see, they throw money into this crisis and do not disdain any measures, even the breaking of contracts or the direct redirection of volumes. hired by other countries to Europe.

– Igor Valerievich, what are the price forecasts? It has now fallen below $750, and Dmitry Medvedev predicted that the price per thousand cubic meters would be $3,000.

– Well, if there was a normal freezing winter, we would see $3,000. Although, under the scenario of a price increase to $3,000, the same mechanism for capping gas prices will simply kick in on the stock exchange. But again, the price ceiling introduced by Europe is floating. It is designed in such a way that at no time does it prevent Europe from competing in gas supply prices with Asian markets.

The ruble has pumped up its muscles, inflation has slowed down: the main economic results of 2022

What will happen to the salaries of Russians in 2023: the future of the economy is revealed