They published exclusive photos of the bedroom of Ksenia Sobchak and Konstantin Bogomolov. 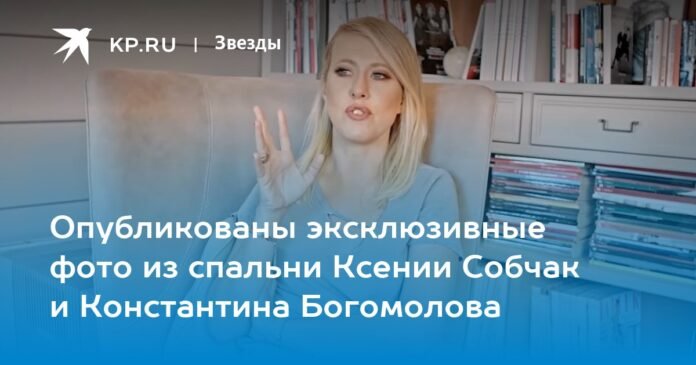 Ksenia Sobchak in the living room near the shelves with books. Photo: YouTube channel “Watch out, Sobchak!”

Ksenia Sobchak moved to a new house on the outskirts this year, which she built and equipped for more than four years. The mansion with an area of ​​more than 1000 square meters is located in the elite village of Gorky 8, where Ella Sobchak has the “old house” where she used to live. The village is 15 km from the Moscow Ring Road. The new house is huge: ground floor, two residences. Built in Finnish pine, with huge panoramic windows. Finishing – wood, marble and other natural materials. Houses of the same area in this village are now being sold at a price of $6 million (412 million rubles).

Sobchak in the bedroom, against the backdrop of the matrimonial bed. Photo: YouTube channel “Watch out, Sobchak!”

Ksenia Sobchak lives in the house with her son Plato and her husband Konstantin Bogomolov. Ella sobchak compensated part of the costs of construction, finishing works, decoration and furniture through barter: every year of construction she advertised goods, services and companies on her social networks. After settling into the house on her YouTube channel, Sobchak shows off the interiors of the new house, once again as advertising partners. In total, she could save up to 50% of expenses on finishing and interior work.

Ksenia Sobchak shows her house in parts. This time she showed the main thing: the bedrooms.

What did Ksenia Sobchak show?

– The entrance to all rooms is controlled by a security system – you can enter by fingerprint. Everywhere video cameras, a modern security and video surveillance system.

In Sobchak and Bogomolov’s bedroom, there are huge windows in front of the bed. Photo: YouTube channel “Watch out, Sobchak!”

– The windows are huge, there are many trees in the yard. Squirrels jump on them right under the windows.

– Inside, the floors are connected by a staircase: the weight is three and a half tons. It’s from a brass shop, and 50 people did it.

– The wing of the house with the children’s rooms is huge. The son of the star Plato has two rooms. The first – with a large table, cabinets, a play area. When the tutors come, they work with the child here. Sobchak says: “There are still fewer lessons than toys, but this is normal: Plato is still 6 years old.” Here on the walls there is a starry sky – these are hand-painted wallpapers, real constellations are painted on them. There are boards in the cabinets that you can draw on with crayons. The second – Plato’s room is already a bedroom: here is a sports corner, a bed on two levels. Ksenia made her dream come true: “All my childhood, living in a classic St. Petersburg apartment with a classic interior, I dreamed of having a bunk bed to sleep on.” But Plato sleeps on the ground floor. The child has a large collection of Lego constructors, collecting them is the child’s favorite thing.

Ksenia Sobchak at the entrance to the room of Plato’s son. On the left on the wall there is a security system: entry to all rooms by fingerprints. Photo: YouTube channel “Watch out, Sobchak!”

– A separate children’s room was made for Anna, the daughter of Konstantin Bogomolov from his first marriage. Sobchak tried to do everything so that the teenager liked it: “I did it with a lot of love.” Here is an orthopedic sofa bed; shelving; wardrobe; desk; 19th century chest of drawers from France. Ksenia bought a chest of drawers at a flea market an hour from the center of Paris: “Every time I go to Paris, I go there and choose a few things”.

– There are many shelves with books in the living room. Sobchak laughs: “Because of this book, Konstantin and I had a fight -” Zuleikha opens her eyes. I really liked her. I began to share this knowledge with Konstantin: he listened to everything he could … And then I decided to keep my love of literature to myself.

– Ksenia has a separate dressing room – there are many mirrors and soft chairs. A stylist comes here to color and do the star’s hair before going to events or shooting. There is a walk-in closet, and it’s huge. In closets: clothes, shoes, glasses, bags. “Relics from scratch,” says Sobchak. “Now I haven’t bought that much in a long time. Some things are 10 years old – I don’t throw anything away, I’m Plyushkin.

The pool is the entrance to it from the bathhouse, and you can go out onto the terrace. Photo: YouTube channel “Watch out, Sobchak!”

– Belarusian doors lead to the bedroom (as well as to all other rooms). Sobchak showed that there was a thermometer by the bed: “I sleep at 17 degrees. I am such a crazy person that there is always a thermometer so that I can see, the temperature is not higher. I can’t stay in rooms with heating. I sleep 8-9 hours to feel good. I never go to bed before three in the morning: I watch, I write, I speak”. Bed in Sobchak and Bogomolov with suede headboard. There was no place on the wall for a TV, there was a window in front of the bed. Therefore, earlier in the bedroom there was a TV in a special installation next to the bed, but Konstantin criticized such a structure. Ksenia complained: “Now I don’t watch TV in bed, I watch it from an iPad!” However, the house has a separate cinema room.

– Bathroom with panoramic windows-doors, from which you can access the terrace. There is a bathtub and a shower tray. There is a refrigerator for cosmetics. Bathhouse and swimming pool nearby.

Named the best television presenter in the country. And this is not Ekaterina Andreeva (more)