“They stole again!”: Nikas Safronov complained about the problems with his house in Turkey 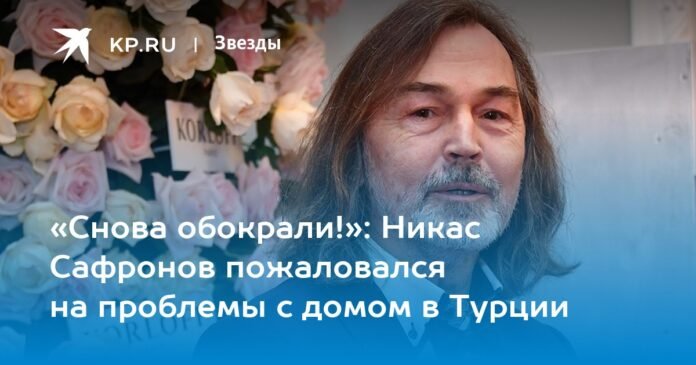 According to the painter, now the construction of his mansion is frozen

Nikas Safronov is no longer happy with the presence of real estate in Turkey. According to the painter, now the construction of his mansion is frozen.

– A few years ago, for advertising a housing complex, I was given an apartment in Turkey, in Alanya.

And I decided to buy 7 more apartments there for my six children and brother, – says Safronov. – I bought these apartments for 120 thousand euros, but I got burned on the sale of apartments, I received only half of the amount spent on them. The real estate market in Turkey has now crashed heavily. You have no idea how much I suffered with these apartments. At first some vagabonds settled there. They just picked the locks and lived there.

We had a hard time getting them out. The local police did nothing to my complaints. I had to give these homeless people money to take their rags and move. I am already silent that our apartments were looted. Then the house manager began to secretly rent our apartments to tourists. In general, I was gray with these Turkish apartments, and I am very glad that I sold them recently. But I have an unfinished house in Turkey, in Mahmutlar, with which I am now suffering.

Then they will write a slander against me that I am allegedly building a house illegally, in a green area where hawks fly. A lot of money was spent on gifts to local officials so we could build. Then they wrote another complaint against us that we started building in the area where the swallows nest. Once again, bureaucratic thresholds had to be covered. Now another circle of hell is a robbery. Call: “You were robbed, come!” We were still surprised, there, apart from building materials, there is still nothing to take. Luka’s son flew to the construction site and found out that a video surveillance system had been stolen from us, which we recently installed at the request of the same officials. Now we have to install it again. In the meantime, there is no such system, our construction site has been frozen by our officials. To be honest, given how wise they are about us here, I don’t even want to build anything. I endure only for the sake of my children and Nikolai Nikolaevich Drozdov, whom I promised to invite to a housewarming party. Otherwise, he would have sold this land a long time ago, Nikas Safronov admitted to KP.RU.