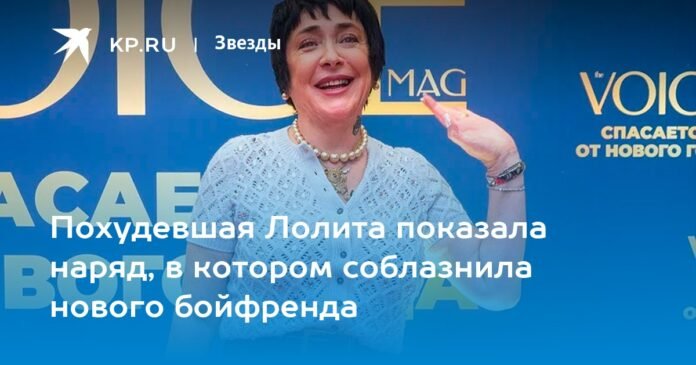 According to a long tradition, VOICE magazine presents a New Year’s musical film on the eve of the holidays.

This year Alexey Vorobyov became a screenwriter, director and creative producer of the musical film.

One of the main roles in the film was played by Lolita Milyavskaya. At the premiere of the image, the artist arrived in a leather skirt with a high slit that exposed her slender legs. The skirt turned out to be very durable, as Lolita attempted to show reporters the string on it.

– Do not believe me, the skirt of 98 has been with me since the duet “Academy”, – Lolita Milyavskaya told kp.ru.- And I remembered it by chance when I was going on a date. My friend advised me to use it. Like, she’s hot. And the advice was correct. My husband was delighted with the set. In general, I can say that at the moment, at the age of 59, I met a cool and worthy man. He was so happy alone in the early 2000s. Happy as a woman. We still have real men, the beaming Lolita shared.

The artist, in turn, when explaining her current thinness, admitted that it is timely help from an endocrinologist.

– How did I lose weight? I made an appointment with an endocrinologist and got tested. Also, I have been eating once a day for the past 25 years. I do not flirt. I did not change anything in my diet, says Lolita Milyavskaya to kp.ru. – There are no scales in the house. I don’t weigh myself, I don’t pay attention to it, I still don’t clog my brain with the fact that oh guys I’m losing weight!

Do not do stupid things. If you’re losing weight, it shows in things. By volume. No need to try… I would be very stupid if I want “90-60-90” at the age of 59. The skin will hang, I will not bear the burdens that not all young people can bear. I am not calling anyone to anything. Broken in the body? Everything has a cause and effect relationship. If you are engaged in losing weight in a series of weight loss, you will not succeed. You will lose weight with some stupid pills, nutritionists who really don’t understand anything about it. Or you will pass a full exam. You will be given a verdict and told what needs to be fixed.

– With age, the entire liver slows down. And none of us will be able to stop this period, the singer believes.