Thousands of visitors form giant queues at Moscow museums. Why and how to avoid them 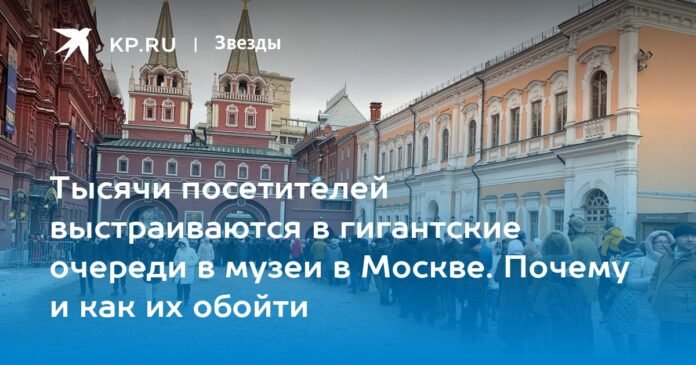 Queue to the Historical Museum

On January 4, people lined up along the Tretyakov Gallery in the middle of Lavrushinsky Lane. They want to enter the famous museum. But security at the front gate lets guests through in small batches. On the radio, coordinate actions with colleagues at the exit: obviously, they count how many visitors have left and how many can be launched. Otherwise, the museum will not be crowded.

The news, of course, is surprising (pleasantly surprising – people did not go to taverns and shops, but to the museum!), But only for those who have never passed the Tretyakov Gallery on a long vacation before. And in the summer, the line in Lavrushinsky Lane is resolved only after sunset. The reason for the queues: tourists.

However, there is a safe way to see Bryullov’s “Water” and Vereshchagin’s “Apotheosis of War” without the queues. You just need to buy a ticket on the museum website. They are sold by specific time slots for each half hour segment. Also, some people who stand in line do this, but don’t know that standing is not necessary. Immediately go to the entrance and tell the guards that you already have a ticket, they will let you in without any problems. Unfortunately, for some reason, this is not reported anywhere, although the problem is not a year old.

But there is a not entirely honest way to enter the museum without queuing. Enter from the entrance from the side of the Church of St. Nicholas the Miraculous in Tolmachi, pretending to be parishioners, and then slip through the internal corridors to the museum part.

Last fall, when the Tretyakov Gallery summed up the results of eight months of work (January-August), it called the numbers 1.334 million visitors. For comparison, in 2021 for the same period there were 960 thousand guests. And by the end of 2022, the Tretyakov Gallery expected a total of 1.9 million visitors, more than in pre-COVID 2019. True, the results have not been summarized so far, so it is unknown whether the recoding.

By the way, a number of visitors during the New Year holidays also line up at the Historical Museum on Red Square. Full house in the Moskvarium at VDNKh. But you can freely enter the New Tretyakov Gallery on Krymsky Val.

100 years of the USSR. What was it, a great experiment or an incomprehensible blessing? (plus)

Share
Facebook
Twitter
Pinterest
WhatsApp
Previous article
380 years of the birth of Newton: myths and realities of the life of the great scientist KXan 36 Daily News
Next article
The 2022 rental campaign will begin next Tuesday, April 11