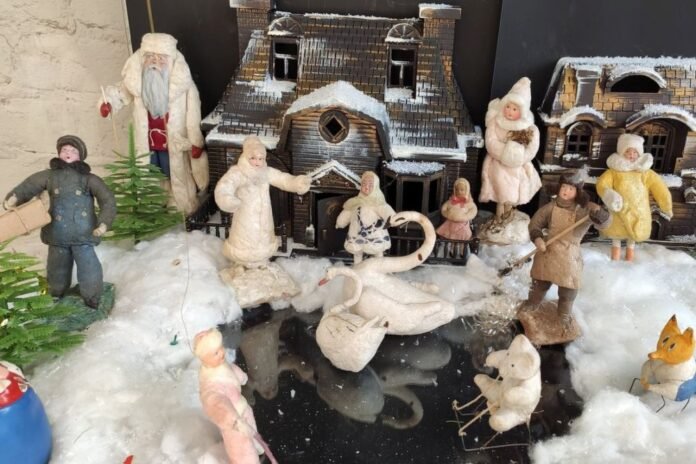 In Vladivostok, in the branch of the VK Arseniev Museum-Reserve of Far Eastern History, the Sukhanov Family Memorial House-Museum will host a Christmas exhibition “Over a cup of tea: sweets of the 20th century.” She tells about what, from what and how they drank tea in Soviet Vladivostok.

One of the main characters of the Far Eastern “sweet” industry of the era of socialism was the Vladivostok confectionery factory, which is now known as Primorsky Confectioner. Founded before the revolution, nationalized in 1928, it became part of the USSR system of confectionery factories and operated according to the state plan. The same sweets were produced here as in other factories of the young Soviet country.

Among the “favorites” of the director of the house-museum Nikita Svistov, labels for sweets of the 30s, the time of the complete elimination of illiteracy and the transition to a new measurement system: pounds to kilograms, vershoks – to meters, acres. – to hectares.

– Sweets were a tool of propaganda and education. We have labels with a little easy-to-remember rhyme that explains that a kilogram is 2.5 pounds. It is very interesting and instructive, ”he continues.

It was at this enterprise that Ptichye Moloko, and now Primorsky sweets, began to be made on agar-agar, which is made from amfeltia algae. For the production of sweets in Vladivostok, it began to be used in the 20s of the last century and, as they say, was a “local feature”. The first boxes of “Birds” appeared on sale in 1976, the author of their recipe, like many other sweets, was the confectioner Anna Chulkova. The homeland thanked him by awarding him two Orders of Lenin, the Order of the October Revolution, and conferring on him the title of Hero of Socialist Labor.

Exhibitions of Christmas decorations are open in the capitals of Primorye and Transbaikalia.

Hundreds of toys and postcards are presented at the exposition of the “Happiness on the Christmas Tree” exhibition, which operates in Vladivostok GUM. The exhibition opened for the eleventh time, all the exhibits are from the private collection of Irina Keichina. She believes that the toys can be used to study the history of our country. Among them are those who caught the Stalinist repressions of the 1930s and the Great Patriotic War, and those who saw the light of day during the Khrushchev thaw and the Brezhnev stalemate.

Perhaps the most “adult” in the exposition are toys made of cotton, which are 80-90 years old. These are circus performers, postmen, janitors, fairy-tale characters. Some of these Christmas decorations have survived to this day. On neighboring trees and in nearby shop windows – balls from the era of electrification, wire ornaments that were created during the Great Patriotic War, astronauts and stars of the 60s – the era of the beginning of space exploration …

Irina Keichina says that people who come to the exhibition often laugh or cry when they see toys from their childhood and tell stories related to them.

“For the older generation, New Year’s miracles began with postcards. Soviet artists Vladimir Zarubin, Ivan Dergilev, Vladimir Chetverikov and others. But the Kremlin chimes remained the most popular style. Viewers will also see all this variety of subjects on the postcards of the exhibition, which gives a sense of celebration and miracle”. he said in the museum.

Share
Facebook
Twitter
Pinterest
WhatsApp
Previous article
Will mortgages with cryptocurrencies arrive in Spain or is it too risky?
Next article
Pope Francis supported the idea of ​​a Christmas truce between Russia and Ukraine