Trump’s tax returns have been released 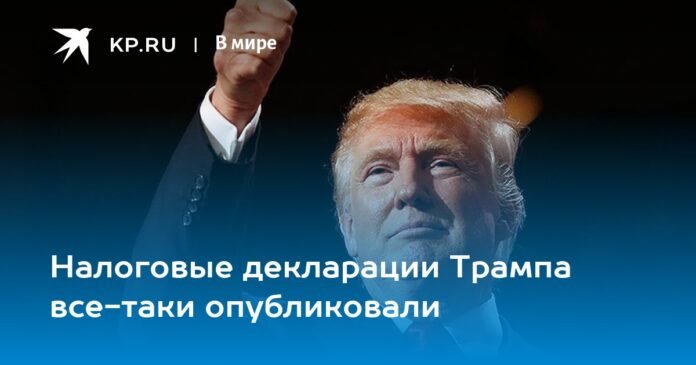 Trump said such a move could have “terrifying consequences” for Democrats

The document has more than 6,000 pages. In addition to the financial component, the reports, half of which are dedicated to the Trump couple and the other half to structures controlled by former US presidents, also contain a series of personal data of both the politician and businessman himself and his wife Melania . For example, bank account numbers, social security numbers, and others.

In response, Trump said such a move could have “terrifying consequences” for Democrats.

“The Democrats should not have done this, the Supreme Court should never have approved it, and it will have dire consequences for many people. The radical left Democrats have used everything as a weapon, but remember that this is a dangerous two-way street.

In addition, he said that the published reports once again demonstrate his success as an entrepreneur who has been able to use various working methods to create well-functioning companies and thousands of jobs.

In turn, the House of Representatives recalled that presidents are not ordinary taxpayers, since “with great power comes great responsibility,” and the main task of the US Congress is to ensure the rule of law.

The fight over the release of Trump’s financial records lasted several years and ended in a Democratic victory after the Supreme Court ruled to release the information.

According to experts, the main piece of information that Trump has wanted to hide from the general public is the 2020 income statement. According to her, the Trump couple paid $14 million to the tax authorities, but then they were able to receive a completely legal refund of the entire amount. amount because his business was not profitable.

Share
Facebook
Twitter
Pinterest
WhatsApp
Previous article
Federation Council Deputy Chairman Konstantin Kosachev: For the West, the integrity of Ukraine is the land, not the people KXan 36 Daily News
Next article
Income Statement 2022: this is the new deduction for maternity