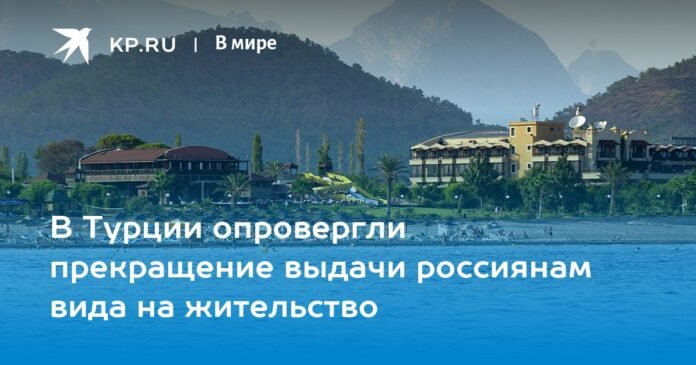 In Antalya, the most popular among Russians, house prices almost tripled during the year

A whirlwind of panic swept through Turkey’s Russian-language social media: Russians are no longer granted residence permits on the basis of housing rental contracts. “KP” tried to understand the situation.

But first, about the backstory. Turkey has always been one of the few countries where it was possible to obtain a residence permit, having a rental contract, for a whole year in one go, and then renew it. The problems began with the influx of emigrants from Syria, Afghanistan, Iraq and other countries in the region, to which Turkey hospitably opened its doors. The Turks began to worry when in other cities the number of refugees exceeded the number of local residents, signs in Arabic replaced signs in Turkish, and house prices rose every month.

This year, Turkey, in addition to the Arabs, was flooded with tens of thousands of refugees from Ukraine, and after the announcement of the mobilization in Russia, the Russians also rushed to wait abroad. As a result, in Antalya, the most popular among Russians, house prices almost tripled during the year. As Savash Dash, an expert on the tourism market, told KP, the Turks, who traditionally treat foreigners, especially Russian-speakers, well, began to lose their nerve.

– In Antalya, local residents are already ready to go to the protests. Over the past year, rental prices have skyrocketed. All the locals who rent apartments are trying to evict the Turkish tenants and rent their apartments to the Russians. I will not be mistaken if I say that in connection with this a serious social explosion is brewing in Antalya.

About 15 thousand signatures were collected for a petition demanding a ban on the sale and rental of housing in Antalya to foreigners. “25% of the population of Antalya are foreigners. They cause a very serious increase in housing prices for local residents, every third property in Antalya is bought by a foreigner. We demand to stop renting and selling homes to foreigners! Allow them to stay as guests in our hotels, pensions or resorts. This city is ours! says the petition.

The authorities have to react to the mood of society. The rules for obtaining a residence permit are tightening, more documents are required in the country’s immigration service. The requirements for them have also increased: if earlier a simple copy of a document was enough, today it is necessary to provide it not only certified by a notary, but also with an apostille from the Russian Embassy in Turkey, as well as with the Seal of the Ministry of Foreign Relations of Turkey. All this costs a lot of money. But the saddest thing for the applicants is that in the last year the number of extradition refusals has increased. The authorities, responding to the desperate calls of their own citizens, were also forced to lock down some areas of Istanbul, Antalya, Alanya in order to obtain a residence permit.

However, despite the more complicated requirements for documents and an increase in the number of refusals, rumors about the termination of the issuance of residence permits for Russians turned out to be greatly exaggerated at the moment. In the Ankara migration service, where the KP correspondent visited, there was no excitement and panic, Russian speech is heard everywhere, people calmly submit documents. At the department’s address, the KP correspondent was told that they had not heard of any changes.

– All information is posted on our website, and changes in the acceptance of documents are posted there, if they are introduced, – said the representative of the department.

The Consulate General of the Russian Federation in Antalya, at KP’s request, also responded that they were not aware of any global changes in accepting documents from Russians:

– Our foreign office has not received official information about the suspension or termination of the issuance of certain categories of residence permits for Russian citizens temporarily staying on the territory of the consular district provinces. Appeals of compatriots on these issues are also not recorded, – said the interlocutor of the newspaper.

The Russian diplomatic mission added that all aspects of the stay of foreigners in Turkey are the responsibility of the local immigration authorities.

One of the Turkish lawyers consulting about obtaining a residence permit confirmed to KP that there were no official reports from the Antalya migration service, and the panic information spread on social media is not confirmed.

– I know about the rumors about the alleged termination of the acceptance of documents for a residence permit from Russians, but literally today, representatives of the Antalya migration service told me that everything in their region works as usual. Of course, if employees have a question or a complaint about a particular citizen who has applied for a residence permit, they have the right, as always, to demand some additional documents. But all this is within the framework, there were no special resolutions, including unofficial orders.

The KP interlocutor added that in recent months, many Russians have come to Antalya with the aim of staying here, but many of them have already returned: “In fact, they have to live here only with available funds. It is forbidden to work here with a residence permit, and even if someone tries to work illegally, they will never earn as much here as in Russia, ”he said.

– Any country is not rubber. Foreigners are necessary to a certain extent, under certain conditions. Against the background of other countries, Turkey is still very supportive of them, but for the time being. What will happen tomorrow or the day after tomorrow, nobody knows, the lawyer added.

Share
Facebook
Twitter
Pinterest
WhatsApp
Previous article
Russian Ministry of Defense: Russian army destroyed 8 shells of the Ukrainian Armed Forces, including those used for firing in Donetsk – Rossiyskaya Gazeta
Next article
Madrid maintains the discount and will raise it to 60% in February