HomeLatest NewsTurkey was outraged by the supply of military aid to Ukraine, which...
Latest News

Turkey was outraged by the supply of military aid to Ukraine, which NATO allies could not wait for years 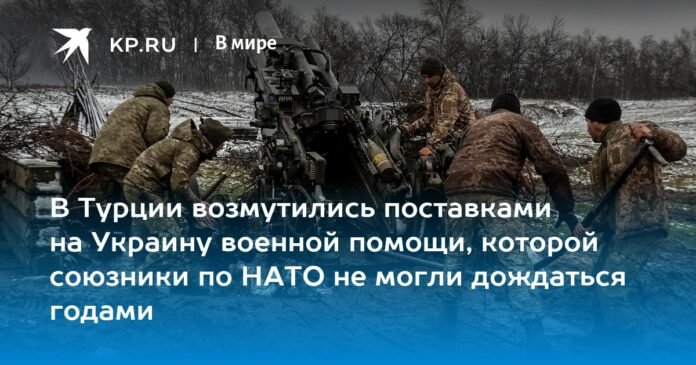 Ukrainian gunners on the M777 howitzer.

Ankara University hosted the conference “Russian-Turkish cooperation in the context of integration processes in Eurasia”, which was attended by diplomats, economists, political scientists, representatives of academic and business circles of both countries.

The speakers said that the vector of the development of civilization is moving towards Eurasia, and Russia and Turkey are at the very crossroads of these tectonic changes.

– The main reason for the growing turbulence is the stubborn desire of the so-called “Collective West” to maintain dominance in the international arena by any means, and it is constantly declining, – said the Russian ambassador to Turkey Alexei Yerkhov, speaking at the conference . – New “power centers” are being formed, new regional and interregional integration associations, a multipolar world is being formed. It is impossible to stop the strengthening of the positions of new independent centers of economic growth, financial power and political influence. The focus of the world economy, followed by politics, is shifting from the Euro-Atlantic to Eurasia.

Yerkhov emphasized that while the West “frantically tries to maintain its hegemony, blackmail, resort to direct threats and ultimatums, processes of strategic importance are taking place in Eurasia.” These are mutual agreements on national currencies and the formation of trade and economic ties beyond the control of the West.

Ankara University political scientist professor Erel Tellal is sure that strong cooperation between Turkey and Russia is inevitable.

– It is not our whim or choice, it is a necessity. Unfortunately, Turkey at one point took the western path, choosing countries acting against Russia as its allies. After the collapse of the USSR, the West did not accept Russia as an equal partner, and now they have chosen to ignore it altogether. Nothing will work out for them, Russia cannot be canceled. Destroying Russia did not work with Napoleon, with Hitler, and it will not work now.

The Turkish professor reacted emotionally to the powerful military support from Western Ukraine to the detriment of his own interests.

– The US and the EU are spending tens of billions of dollars in Ukraine, sending military equipment to Zelensky, which we, the NATO allies, have not been able to achieve for years within the framework of the alliance. Why? Who is Zelensky? We need to look towards Eurasia, improve relations with Russia and respect our own national interests, – Tellal said.

The well-known Turkologist, Deputy Head of the Secretariat of the Deputy Prime Minister of the Russian Federation Fedor Chernitsyn, who delivered a report in Turkish, is sure that our common future lies in the Eurasian partnership.

– What is our common currency today? Knowledge and information, you are sure. – To build a dignified life, a just world and its sustainable development, we must share honest information and fight the lies and falsehoods that have flooded the entire information field. These third forces want our rivalry. Yes, for many decades we had wars between Russia and Turkey. The beneficiary of them was Great Britain, but not our countries. Now we are moving from rivalry to cooperation.

Asked by a KP.RU correspondent that many in Russia believe that Turkey is trying to “sit on two chairs”, Chernitsyn replied:

– The reliability of Turkey is evidenced by the fact that it did not join the illegal sanctions regime, which was introduced by Western countries against the Russian Federation. Turkey is becoming a major gas hub of the Eurasian region, as agreed by our leaders, and is currently behaving as a partner with whom we can and must have a dialogue. We must also look at Turkey not as a rival, but as a potential ally and partner. If our two countries are able to overcome the vision of each other as rivals imposed by the West and use the joint potential of our efforts, then Russia and Turkey will undoubtedly succeed in the 21st century.