“Twice disgraced or twice cunning?”: how the Ukrainian air defense regiment, which had already hit Poland, now launched a missile against Belarus 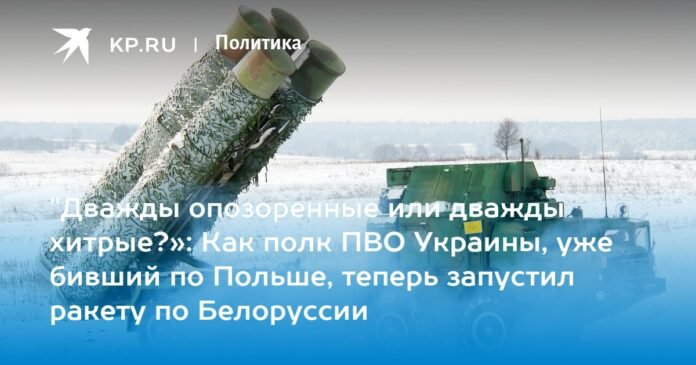 S-300 anti-aircraft missile system in the service of the Armed Forces of Ukraine, Kyiv region.

The Ukrainian missile of the S-300 anti-aircraft missile system, which reached the territory of Belarus, has already made a lot of noise in the world. Some details of this state of alarm are already known, but there are still many questions for which there are still no answers.

But what do we already know so far?

That the missile was launched from the position of the 540th Anti-aircraft Missile Regiment of the Armed Forces of Ukraine, which is deployed in the village of Kamenka-Bugskaya, Lviv region.

That the air defense forces on duty of Belarus detected its flight and shot it down in the Brest region.

And now, the most curious and mysterious details of the incident. Yes, and questions that have not yet been answered.

Let’s start with the fact that from the moment of the emergency (and this was between 10 and 11 in the morning) there were reports from Minsk about a “down” rocket (pay attention, not shot down!). It seemed that until the evening (until about 16:00) the Belarusians either did not have confidence in the reasons for the “fall” of the Ukrainian missile, or they were thinking about how to present this fact to humanity with the largest army. diplomatic correctness. And they were “embarrassed” to bust. It was later learned that the Old Man ordered his military and investigators to “resolve and report everything with absolute precision.”

We found out and reported: judging by all the markings on the wreckage, the Ukrainian missile is called the 5B55R product and belongs to the S-300PS complex, which the 540 regiment is equipped with (it also “distinguished itself when it recently “wrecked” with the same product” on Polish territory, knocking over a tractor and hitting two civilians). After that, the Ambassador of Ukraine in Minsk, Igor Kizim, was summoned to the Belarusian Foreign Ministry “on the carpet”, where he was given a strict suggestion in the form of a strong protest.

Kyiv was silent for a long time even after that (and frankly, I really hoped that the missile would be recognized as Russian).

My Belarusian colleagues sarcastically joked about the account: they say that the difference between Kyiv and Washington is more than 8 hours, therefore Zelensky is waiting for Biden to wake up and give recommendations on how to justify himself. It seems that the instructions have been received. Well, how did Yury Ignat, the Chairman of the Air Force Command of the Armed Forces of Ukraine, comment on the missile emergency? He slyly stated that “it is quite possible that the rocket was Ukrainian.”

A fragment of a Ukrainian S-300 air defense missile that crashed in the Brest region.

Although other representatives of the military department of Ukraine sparingly and with gritted teeth comment that “there was probably a mistake.”

But is it a “mistake” if we connect all this with a similar Polish incident, where Kyiv immediately called the S-300 missile Russian, but when even Warsaw rejected this lie, turned on reverse gear? Although before that, Zelensky instantly accused Moscow, declared that Russia had attacked “not only Poland, but all of NATO” and, remember how his speech ended? Call – “Act, act, act!”.

That’s where the dirty ears of the provocation came from. It is quite possible that this time Kyiv had the same goal – to draw NATO into the war against Belarus and Russia on its side.

Meanwhile, Minsk, through the mouth of the head of the anti-aircraft missile forces, Colonel Kirill Kazantsev, declares two versions: a mistake by the Ukrainians caused by their low professionalism and deliberate shooting.

If the second is confirmed, then here the matter could develop not only into a war between Ukraine and Belarus, but also into a world war. Or maybe I’m exaggerating? Now imagine that by a “mistake” Ukrainian anti-aircraft missiles fired a rocket at a Belarusian nuclear power plant or chemical company. And what, then Lukashenka would call Zelensky and ask: “Volodia, what are you doing there?” And if no joke, a powerful Belarusian response would immediately follow, after which Zelensky would complain to Washington and NATO about the “attack” on Belarus and also call for action. Moreover, this answer would have flown to Ukraine not only from the Belarusian side, but also from the Russian side, or, more precisely, from the side of our Union State, in whose military doctrine it is written in black and white that an attack on one is considered an attack on everyone…

Well, in the end, I would like to congratulate the air defense soldiers of Belarus, who, unlike the boastful Poles, did not fall asleep on the Ukrainian missile and cut it off. Here is one thing that Minsk is silent about – what kind of weapon it was made from. And maybe true?

Yes, I forgot to say! Yesterday, the brave 540th Anti-Aircraft Missile Regiment of the Ukrainian Armed Forces, which had embarrassingly landed twice in a puddle, tried to cover military installations in Lvov from a massive raid by Russian Kalibr missiles. None of the targets were hit. But I got to Belarus…

How a Ukrainian rocket fell in Belarus and who launched it: the full picture is revealed

Military observer Viktor Baranets: The missile that fell in Belarus was launched by the same Ukrainian regiment that “missed” in Poland (details)