HomeLatest NewsTwo years ago a civil war was about to break out in...
Latest News

Two years ago a civil war was about to break out in the United States: was it an FBI provocation or a Trump coup? 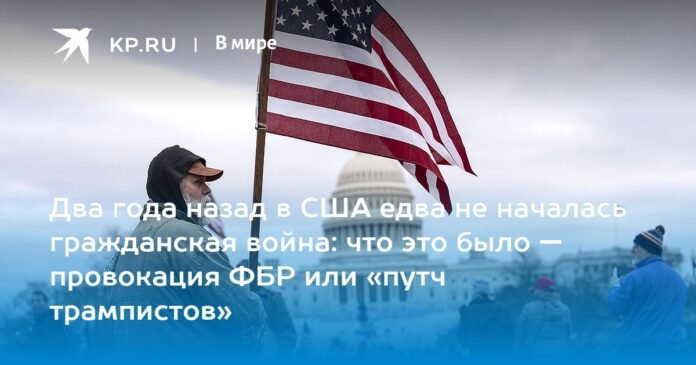 What was that “Washington Maidan” after all: a spontaneous day of anger or a carefully prepared provocation?

MAIDAN IN AMERICAN – “THIS IS THE SAME OTHER”

Early 2014. Armed and well-coordinated groups of Ukrainian radicals break into government buildings. This is the same Kyiv Maidan with blood, corpses and a successful overthrow of power. The West, led by the United States, applauds: “Long live the triumph of democracy!”

Only seven years pass, and the boomerang of the story returns to his homeland in the form of a farce. On January 6, 2021, angry supporters of President Donald Trump, who lost the recent election, storm the Capitol, the seat of the US Parliament. Result: the protest is brutally suppressed, several protesters are killed, the largest media outlets shout about the “fascist threat”, hundreds of street activists are arrested and prominent Democrats (members of the ruling Democratic Party, headed by the new “leader of the nation” Joe Biden) seriously compare this mess… to September 11, 2001, the worst terrorist attack in history, which claimed nearly three thousand lives.

However, the main question immediately arises. What was that “Washington Maidan” after all: a spontaneous day of anger or a carefully prepared provocation? And if it’s the latter, who planned it? Outgoing President Trump, who dreamed of clinging to power through a popular revolution? Or his Democratic opponents, along with the “liberal column” of the police and the FBI, to scare everyone with a caricatured “fascist coup”, and then, under the guise of “saving freedom”, permanently purge the hated Trumpists. and other “right-wing radicals” from the clear American politician?

To answer, the easiest way is to remember the chronology of the “case of January 6”.

So, the beginning of 2021. There are only three weeks left until the inauguration of the new president Biden. The last window of opportunity for Trumpists who believe the recent 2020 election is “stolen” is about to close (we won’t discuss now whether the Democrats actually rigged the vote count; it’s important that millions of Americans still believe this).

The situation has been heating up since January 1, 2021: the mass movement “Women for Trump” (yes, it exists) is one of the first to announce a rally in support of it in Washington. And this parade is planned, attention! – on day 6.

January 4. President Trump, still in office, is announcing on Twitter that “wild” protests are expected (literally, that’s what he wrote).

For a time, the police managed to keep the crowd at the Capitol.

On January 5, it is announced that up to 50,000 opponents of Biden will go to Washington. Officials lock down the city, prohibiting parking and vehicular traffic. Rumors circulate: “Big rallies with the participation of Donald Trump will be held right in front of the White House.” Supporters of the Republican – all sorts of representatives of the “deep people” who are opposed to liberal values, but for the free circulation of arms, are full of desires to “defend democracy” to their best understanding.

January 6. Trump convinces his supporters that it is time to fight for the country; Yet in their agitated and mutually exclusive tweets that day, you can find anything from a call for a “peaceful expression of will” to a hint of “storming the Capitol.”

In any case, even the supporters of the Republican do not deny that the US president probably wanted to use the “march of the people to the Capitol” as a way of putting pressure on the US Congress, where the results of the disputed elections were being discussed. for the third month already.

Meanwhile, Capitol Hill has its own drama. There is a joint meeting of both houses of parliament, the US House of Representatives and the US Senate, to approve the election results. About an hour before the riots peak, House Republicans again raise the question of the riots’ legitimacy, pointing to glaring violations in Arizona and “dead voter ballots” in Wisconsin and Michigan. The approval of the electoral results is delayed… And the power vacuum is the perfect moment to strike!

An electrified crowd moves, there is an assault on the Capitol, clashes with the police, the evacuation of President-elect Biden and Vice President Pence, the entry of the National Guard into the city and a wave of arrests; Trump urges his supporters to “leave as soon as possible.”

True, the Democrats and various liberal media give the opposite version: they say that the riots broke out first, and only later the meeting of both chambers was postponed. But the Trump supporters claim that they entered the building peacefully when most of the deputies were leaving it, and that it was the police who provoked the bloody clashes.

The images of the assault on the main building of American politics have gone down in history.

At this point, it is worth focusing. All local power in Washington – both the mayor’s office and the territorial council of deputies – is completely controlled by the Democratic Party. The city mayor directly appoints the chief of police. And she has the most questions. Despite numerous blockades throughout the city, thousands of protesters were allowed to walk unhindered to the Capitol, and the fences and cordons around the strategic building, by contrast, were “for some reason” ridiculously flimsy. Mistake or deliberate provocation?

The main victims, as always, were ordinary people. Police brutality against predominantly peaceful protesters resulted in five deaths. Take Rosanna Boyland, 34, for example, who was beaten by police right in front of everyone at the “temple of democracy”. A subject named Jonathan Gennaro Mellis, who was next to her, tried to defend himself against her and allegedly hit the intelligence officer who was hitting her; for this, Mr. Mellis was sent to prison.

Or another “prisoner of conscience”: Christopher Joseph Quaglin. He is also accused of “fighting with the police”, although surveillance cameras show him simply standing by the fence and arguing with an officer. Of course, you don’t need to be rude, but “holding expressive dialogue” and “hitting” are still different things…

The security personnel pointed their weapons at the door.

As a result, more than 800 people were detained across the country in the “January 6 case.” Most of them are accused of the same charges: attack on state property, vandalism, illegal rallies on Capitol Hill.

The FBI, of course, has an excuse: they say that among the participants in the “case 06.01” there are terrorists with “hellish machines.” It is true that not a single bomb was ever found with which they could actually blow up the Capitol. In desperation, the opponents abroad and their relatives created a website called “American Gulag”, where they collect sad stories of the repressed. For example:

Nicholas Ochs claims that he “just walked into the Capitol and filmed” while working as a professional journalist. Although he was seen smoking a cigarette in the US Capitol building during the assault, there is no evidence of any physical abuse committed by him that day. However, Nicholas Ochs received 48 months in prison and 36 months of probation after his release. He too was sentenced to a total fine of $7,000.”

After the assault began, those in the Capitol building obediently donned chemical protective gear.

Here he is, Washington Themis. The “forced dispersal of rallies and landing of activists” is ours, and “liberal democracy” is theirs. Look, don’t be confused!

And the main intrigue: who is behind it all? The victorious Democrats (and the liberal Republicans who joined them) established an entire parliamentary “January 6th Commission” to investigate the attempted coup. But even they, Trump’s enemies, failed in two years to provide conclusive evidence that he or anyone else was leading the popular uprising.

So, was it a provocation by the Democrats, as their touchy opponents on fringe Telegram channels like to claim (any serious media does not support such a version)?

Let each one answer this question for himself. But one thing is clear: everyone was interested in the “street fire” that day, including irreconcilable opponents, and everyone got what they wanted. Just “slightly” not as desired.