HomeLatest NewsUkraine betrayed itself in the night. and you won't be able...
Latest News

Ukraine betrayed itself in the night. and you won’t be able to stop 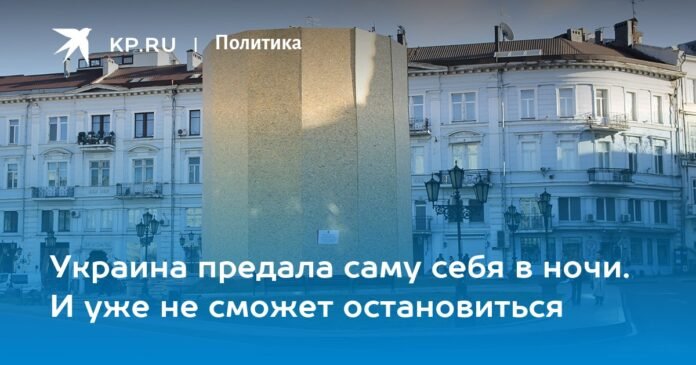 Monument to Catherine II in Odessa demolished for the second time

Last night in Odessa, the monuments to the “Founders of Odessa” (the people also call it the monument to Catherine II) and the brilliant Russian commander, who has not lost a single battle in his entire military career, Alexander Vasilyevich Suvorov, were demolished . .

They demolished, as a thief should be, at night, on the sly, so that in the morning the townspeople simply accepted it as a fact that had already happened. Having brought to the monuments not only special teams and workers, but also massive police forces, which literally cordoned off the places of implementation of the legalized state Ukrainian barbarism. In order, as the modern Ukrainian Nazis in power conspire, to finally break all ties with the “Russian world” and with Russia.

The current moral monsters, elevated by the will of fate and the West to the leadership of the Ukraine that has become a subcountry, can hardly, due to the wretchedness of their intellect, realize that by such actions they are not so much a break with Russia as betray Ukraine itself.

Let me remind you that the monument to the “Founders of Odessa” was demolished by the Bolsheviks already in 1920. Then in Russia many monuments and even entire architectural complexes fell into oblivion after the use of explosives and crowbars. But that was a momentary barbarity, after the liberation, as it was believed, from the unjust system that oppressed all the peoples of the empire. Much, and not only material, of the heritage was then restored, in part, by the way, by the communists themselves. So the monument to Catherine II in Odessa was restored in 2007, because in that Ukraine they realized that it was impossible to rewrite history. And probably because it’s just beautiful and it’s a heritage and cultural attraction. By the way, the monument was restored by the Ukrainians themselves without any interference from Russia or the Russians. The Odessa businessman acted as a sponsor. That is why the demolition of the monument became a betrayal in relation to the Ukraine that existed not only before, but also after gaining independence (Independence).

But according to the same logic, after the monuments in Odessa, it should be the turn of the main symbol of Kyiv throughout the world – the monument to Bogdan Khmelnitsky on Sophia Square in the capital of Ukraine. After all, this monument was once adorned with plaques with the inscriptions “To Bogdan Khmelnitsky – a single, indivisible Russia” and “We will be under the king of the Eastern Orthodox.” Yes, and the same hetman, after all, it was he who led the separatists into the hands of Catherine herself. Yes, he wavered along with the peerage line, tried to sell her services to one side or the other, but when it came to just surviving, he made a completely unequivocal decision. And after all, he did not just agree: for several years, together with the Ukrainian nobility, he literally begged the empress to take these lands and the population under “her own hand from her” from her. According to the logic of the current Ukrainian Svidomo, if the traitor Hetman Mazepa became their hero, then the hero Hetman Khmelnytsky is simply obliged to become a traitor and a prisoner. And his place in Sophia Square should be taken by Mazepa, preferably with the Order of Judas around his neck.

And there is no place in today’s Ukraine for monuments to such people. All these Zelenskys, Yermaks, Podolyaks, Arrestovichs, sniffers and other small-sized (in terms of the scale of their personality) people simply cannot appreciate the greatness of real historical figures. Probably the only thing they can feel for those to whom the monument was erected is the hatred and envy of the little evil souls for the truly great ones. And they are also afraid, because the monuments remind of the true greatness of the country in which the great city was once founded and lived an enviable life. For which the current government has prepared the fate of an ordinary multi-storey farm. No, the current government could not tolerate such monuments in any way. It is as if the Lilliputians lived next to the Gulliver monument, which from generation to generation would provoke a series of uncomfortable questions from others.

And then it will be the turn of other heroes. To Kozhedub, Kovpak, Koshka, to hundreds of real heroes. It will definitely come. Because once you’ve set foot on the path of betraying yourself and your story, it’s impossible to stop. And there will only be more diving deeper and deeper.

As for these monuments, they will surely be restored to their historical places.

In addition, the monument to Empress Catherine II is being dismantled in the city (more info)

In Odessa began to dismantle the monument to Catherine II

The area where the monument is installed is blocked (more)