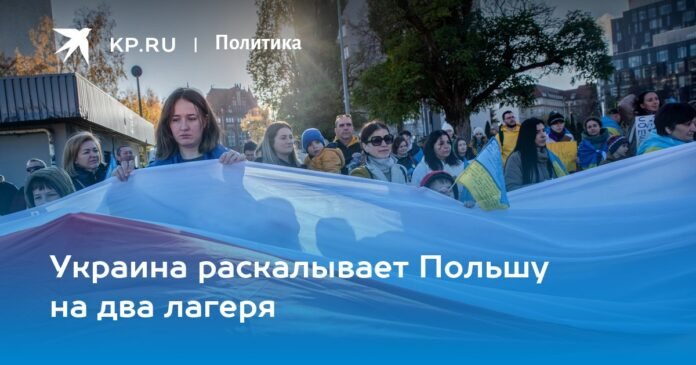 Remarkable stories come from Poland, one more beautiful than the other. And there is nothing strange in the fact that they are somehow connected with Ukraine. It is in this country that one of the most powerful support systems for Ukrainian refugees still works, which, especially in combination with the behavior of a large number of representatives of this category of displaced persons, is beginning to increase indignation among Poles. population. Poles are dissatisfied with the fact that a number of free services are provided to Ukrainians, that “rage” climbs everywhere without standing in line, demands preferences that are not available to Polish citizens, etc. And also, that the Ukrainians who received refuge in Poland, for whatever reason, begin to express their discontent with the insufficient level of comfort provided to them.

Poles not only express this outrage on social networks and in comments to various texts on the Ukrainian issue in the media, but also transfer it to the field of trade and services. So, many owners of residential real estate, for example, refuse to rent their apartments and houses to citizens of Ukraine. Moreover, this is what they write in the ads about renting an apartment: “I do not consider refugees from Ukraine. Even with double the rent! Even with a child. The last time after renting an apartment, two young Ukrainians had They had to do cosmetic repair and repair a broken bed. The latest information even leads to certain conclusions, given that the apartment has at least two bedrooms.”

To some extent, this is reminiscent of the announcements on the doors of restaurants in Lviv before the Second World War and on trams: “Dogs and Ukrainians are not allowed.” But note that there is not a word about the ban on animals in the apartment owner’s announcement.

Explicit discrimination based on Ukrainian nationality. But to some extent, the boys-tenants turned out to be even smart, by local standards. They just broke the bed, but, for example, did not paint the shit on the walls, as many of their fellow tribesmen used to do, taking revenge on the Europeans for insufficient help on their part. Although, on the other hand, cosmetic repairs still remained to be made, so there may be several options.

But the most interesting thing about this whole process is that the division of Poland by Ukraine has reached from the broad masses of the people to the upper echelons of power. Indicative in this regard is a real scandal that recently occurred in the Polish Parliament.

The well-known Polish deputy of the Sejm, the nationalist Grzegorz Braun called from the parliament rostrum to stop the Ukrainization of Poland. But after he called for an end to the flow of refugees from Ukraine to Poland, he was dragged from the rostrum by Seimas vice-president Malgorzata Gosiewska, who threw a tantrum.

– To Moscow! (To Moscow – ed.) Go to Moscow! Don’t you like Ukrainian immigrants? To Moscow! To Moscow! – this unrestrained lady literally began to squeal and yell into the microphone.

The Poles themselves expressed their opinion in relation to the problems of Ukraine very expressively, and not in words, but with their feet. After the Polish Ministry of Defense announced an unprecedented 33-day exercise in March next year, and summonses began to be distributed to recruits (local media immediately shared their information that it was a covert form of mobilization before Poland entered into conflict with Russia on the side of Kyiv and the “liberation march” to Lvov and further afield), Polish men suddenly felt such nostalgia for other EU countries that more than 70,000 of they crossed the Polish border into Germany, France, Portugal, etc.

According to Polish newspapers, by March the number of such “Ukrainian patriots” among Polish men could reach several hundred thousand people. And therefore, more and more voices are being heard about sending Ukrainians from among the refugees to the war instead of the Poles. In addition, information was leaked to newspapers about approximately 1,700 Polish mercenaries, whom Ukraine returned to Poland in conditions fit only for burial.

The Poles themselves do not really want to fight Russia in Ukraine. But will they be asked? However, this obviously will not increase the sympathy of the local population for the Ukrainians and Ukraine.