HomeLatest NewsUkraine has fallen into delirium. It is a betrayal of the...
Latest News

Ukraine has fallen into delirium. It is a betrayal of the most holy 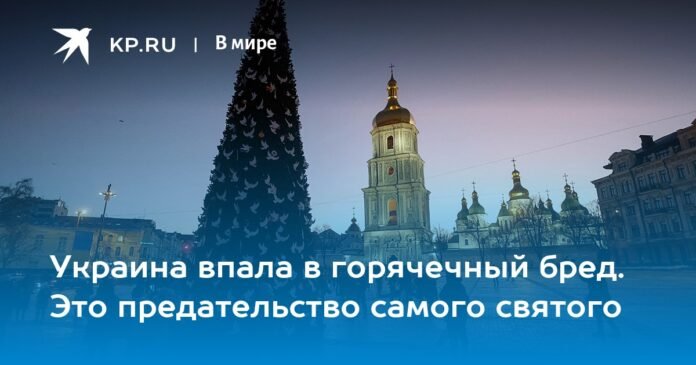 Ukrainian schismatics from the OCU, which is the HCU, intend to postpone the date of this Christian festival to celebrate it together with Catholics

Ukrainian Prime Minister Denys Shmyhal pleased the Ukrainians with revelations about the options for celebrating the New Year and Christmas. Rather, not like that, Christmas and New Year. And this is the case when, unlike arithmetic, a lot is changed by rearranging the places of the terms.

– The Russians will do everything possible to leave the Ukrainians without electricity until the New Year. It is important for them that Christmas and the New Year in Ukraine pass in the dark. Therefore, we must prepare for further attacks,” Shmyhal told a meeting of the Nezalezhnaya government. What villains are these Russians! Green “Grinch – stole Christmas” on his background – the perfect love.

Please note that I did not say so, and Shmyhal arranged this holiday in this way for a reason. But because the Ukrainian schismatics of the OCU, which is the HCU, intend to postpone the date of this Christian festival to celebrate it together with the Catholics. Not according to the Julian calendar, but according to the Gregorian. Why? Aby not like Muscovites. That is, not like the ROC. They have been pushing this idea for many years. And this year, after 44% of Ukrainians, according to a poll (however, we know the price of current Ukrainian sociology!), supported the postponement of Christmas, the HCU officially allowed it to be celebrated on the 25th of December. While it allowed with a clear view in the near future to transfer it. And, look there, and it will join with the Catholic rite. It is not for nothing that Poroshenko made the 25th the second Christmas in Ukraine in 2017. Or the first – it does not matter, the main thing is a holiday.

As for our real Orthodox Christmas, for some reason I am sure that General Surovikin will give Ukrainian energy and other critical infrastructure a breather. Or rather, what will remain of him if nothing changes in terms of goals in Ukraine, and the current schedule is maintained. As for December 25, then, sorry, for us this is not Christmas, but just any Sunday in 2022. So sit in the dark. In addition, Shmygal himself recently admitted that he does not know how long Ukraine will restore its energy infrastructure. And in unison, he sang the same requiem to the Ukrainian energy industry and to the heads of leading companies, and to many experts in this field.

I wouldn’t be surprised if there are two Easters in Ukraine next spring, with Catholics and true Orthodox. Well what is it? Christ was born twice, he will rise twice. And all within the framework of a confession, if this HCU can be called that. The schismatics are not ready for this. There is nothing to say about two Baptisms… They would take pity on Christ, non-humans.

Seeing this crazy mess, I just remembered how in a short period of work in my student past at the Bolshoi Theater, I happened to see the resurrection of the play “Opera about a real man.” Yes, yes, about Maresyev. There was a lot in the production that would be the decoration of any New Year’s table like fairy tales. And the scene “the chorus of surgeons and Maresyev” also took place, although not in the same way as in the popular joke. But what impressed me most at first were Maresyev’s three wives, who appeared to him in the hospital ward after the operation. At that time I was still surprised where, they say, the party organization and the political officer of the unit looked. But then the three wives also went into the shadows, when three mothers (!) Maresyev appeared in the hall, moreover, they were completely different from each other, neither in complexion nor in other external data (since they sang their parts in different voices).

– But how? So I exclaimed, and if at that moment we had said those words, we would definitely have added something about Karl. However, we have both then and now other words in the lexicon.

All this action was excused by the fact that the visions of numerous wives and mothers were the feverish delirium of the operated pilot.

And now a similar nonsense is actually unfolding in Nezalezhnaya under the pitiful whining of the authorities there and an appeal for a common Christianity, so to speak. No, guys, for us it is different: we have “God is not in power, but in truth”, and you have “a Muscovite for a gilyak.”

But something tells me it won’t end there. And I would not be surprised if the leader of the HCU “Metropolitan” Epiphany (Sergey Dumenko in the world) comes out to the solemn Christmas evening service with a staff, like Santa Claus, and barks at the top of his lungs: ” Christ is Risen! , orthodox!” What a difference it makes what is on the calendar After all, everyone knows: “Everyone lies on calendars.”

And this will be the logical conclusion of the lawlessness that is currently being created with Orthodoxy in Ukraine.

Honestly, I wouldn’t be surprised.

Share
Facebook
Twitter
Pinterest
WhatsApp
Previous article
An adaptation of the Turkish series “Knock on my door” will be filmed in Russia KXan 36 Daily News
Next article
Models.com Named Bella Hadid’s Model of the Year