HomeLatest NewsUkraine in the dark: Kyiv authorities are deceiving people that there is...
Latest News

Ukraine in the dark: Kyiv authorities are deceiving people that there is very little left to bear 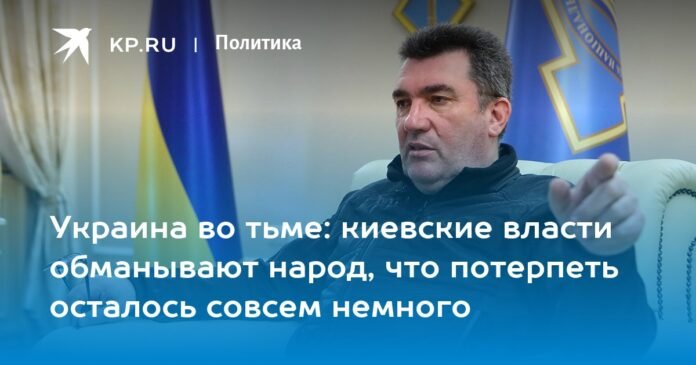 Oleksiy Danilov, head of the National Security and Defense Council of Ukraine, promised that the Ukrainians still have to go through “2-3, maybe four missile attacks”, and then Putin will run out of missiles.

The former veterinarian, now the secretary of the National Security and Defense Council, Oleksiy Danilov, envied the laurels of the full-time Ukrainian propagandist and liar with the call sign “Abdristovitch” and began to console the Ukrainians in his own way. A few days ago, he suddenly changed for a short time his wet fantasies about how he would destroy the Muscovites together with the Ukrainians and announced in an interview with Ukrayinska Pravda that Russia had literally “two or three strikes left, maybe four barrage missiles “. gather.” And that’s all: Putin’s missiles will run out. In general, there is quite a bit left to be patient and find victory. Which is actually at the door.

By the way, just a month ago, the same former Ukrainian gangster from the middle class with a completely non-reputable “Ball” chauffeur (due to the second name of Danilov Myacheslavovich) already said the same words in an interview with Radio Liberty. And the number of attacks that he took away from Russia did not exceed the same “two or three, maybe four.” True, no one will google in Ukraine. That is why Arestovich, with his constant promises of victory, after 2-3 weeks remains popular on Nezalezhnaya, and therefore it does not matter who in a couple of weeks will once again sing to the Ukrainians “a song of a few five minutes”, sorry. , about 2-3 attacks, everyone hides it anyway. And from Danilov, and from Arestovich.

But Danilov is, of course, a separate song. This is not a speaker’s voice. The person occupies the most important strategic position in the Ukrainian power structure and talks such nonsense.

Ball, what 2-3 hits, what wins? Nothing works in your country. Experts in your country have announced that the operation of the power industry without turning off the power can be achieved in 2 years if there are no more missile attacks. Today another power plant in your country was shut down due to damage received earlier, transformers are burned in all cities due to surges, networks are cut, and just yesterday a forecast was officially announced that, according to the results of the fourth quarter, the actual production in Ukraine will decrease by more than 70%. The prime minister of the state announced that almost all hydroelectric power plants, thermal power plants, and a large part of the power grids were damaged in Ukraine, and Ball jumped in and almost asked for more, saying that Putin did not have enough missiles and they would do it. soon it’s over. You Myachik don’t have that many substations left to have enough for a couple of full Russian missile strikes. I would rather look at the night photos of Kyiv, published by the British Sky News, and compare the night views of Kyiv in January and November.

At the beginning of next year, at such a rate, Kyiv will become Malevich’s “black square” in the dead of night. And then Danilov will face a really serious problem: how to broadcast his lies to the Ukrainians if there is no electricity, the Internet, and, accordingly, no radio or telethon.

After all, without this silly “truth in kyiv”, they can start thinking for themselves. And the Ball will remain a ball with no prospects for evolution for a person.