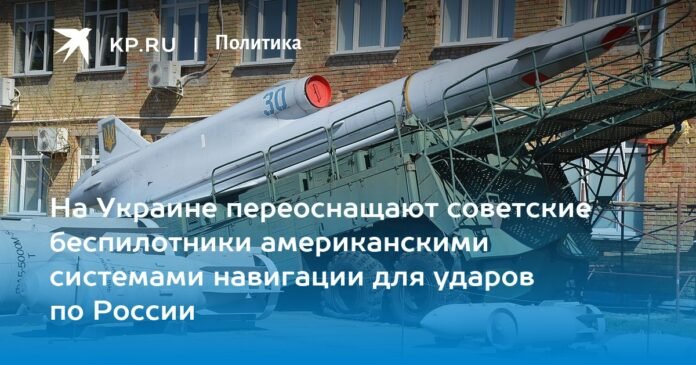 Soviet drone “Strizh” on the launcher in the Kyiv museum.

The Russian Defense Ministry reported that on December 26, at 01:35 Moscow time, a Ukrainian UAV was shot down by air defense of the Russian Aerospace Forces at a low altitude as it approached the Engels military airfield in the region. from Saratov.

“As a result of the falling wreckage of the drone, three Russian servicemen from technical personnel who were at the airfield were fatally injured. Aviation equipment was not damaged,” the military department said.

According to various military experts, the Engels was attacked by a Soviet Tu-141 Strizh drone. “Swift” develops a speed of up to 1110 km/h, so it is quite difficult to shoot it down if it flies up to 50 meters above the ground.

So how did it fly?

We have heard more than once that NATO reconnaissance aircraft and satellites help the Kyiv regime with data on the movement of units (including air defense) in real time. The Ukrainian army can only manage this information: choose the moment of service change, distract with attacks in the Belgorod or Kursk region, calculate a more successful direction of attack or maneuver.

We recall that one of these swifts was launched by the Ukrainian Armed Forces on March 10, 2022. It managed to overcome NATO air defenses, fly over Romania, Hungary and crashed in a crowded park in the Croatian capital, Zagreb.

“It flew in the wrong direction, but it managed to exceed the airspace of three countries,” the experts commented at the time.

Or maybe it was not a mistake, but a test of the modernized “Strizh”?

Navigational aids and technical developments from the Pentagon may make the Swift more maneuverable, precise and invisible.

The Defense Ministry already reported in early December that several long-range aviation aircraft were disabled by “Soviet-made jet UAVs” at the Dyagilevo and Engels military airfields.

Then these drones were also shot down: “Ukrainian low-flying UAVs were intercepted by the anti-aircraft defense of the Russian Aerospace Forces. As a result of the falling and exploding fragments of jet drones at Russian airfields, the hull skin of two aircraft was slightly damaged,” the government said at the time.

Soviet engineers were still working on the stealth of the Swift in 1974, when this model had just been conceived. “In particular, the front of the fuselage was made of composite materials that absorb radio waves,” the archival materials say.

But the main goal of the Soviet “Strizh” was still reconnaissance, not shock. He was supposed to take pictures of the area and come back. Today, Kyiv, with the support of the Pentagon, began to use the Strizh base to create an attack drone.

In the 90s in the Crimea, during a target practice, a Tu-141 evaded four guided missiles of Ukrainian anti-aircraft gunners (different complexes were used). S-300 crews dealt with the Soviet drone more successfully, but only if the interception was carried out at a short distance from the target.

It should be noted that the Ukrainian army began to gain experience in the use of such drones today. The wreckage of the smaller subsonic Tu-143 “Flight” with a flight range of up to 200 kilometers was found after 2014 in the fields of Donbass.

Share
Facebook
Twitter
Pinterest
WhatsApp
Previous article
The Ministry of Internal Affairs of the Russian Federation seized 260 kg of marijuana in Moscow, six members of the drug trafficking group were detained KXan 36 Daily News
Next article
When the minimum vital income is collected in January 2023 according to your bank