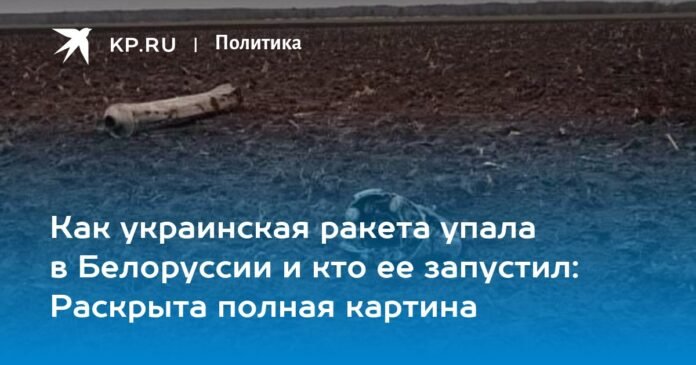 After it became known that a Ukrainian S-300 anti-aircraft missile had fallen on the territory of Belarus, I contacted my military and civilian sources (correspondents of various news agencies that are investigating this incident) by phone.

So far, according to his words, the working version looks like this.

The flight of the S-300 missile from the territory of Ukraine was recorded around 10-30 in the morning.

Apparently, the fragments of the rocket fell in the Ivanovsky district of the Brest region (not far from the agricultural town of Gorbakh).

According to the remains, the type and “brand” of the missile have already been established – this is the 5B55R product of the S-300PS complex. Here is your “passport”:

Management: radio control (there is a homing head).

540th anti-aircraft missile regiment of the armed forces of Ukraine (this unit, which is deployed in the village of Kamenka-Bugskaya, Lviv region, is armed with S-300PS missiles).

The regiment took up combat duty relatively recently, on January 14 of this year, but it already managed to “distinguish itself” when it recently “hit” the same missile in Poland, knocking out a tractor and hitting two civilians.

The Belarusian military agrees that the bumbling Ukrainians tried to counter the massive Russian missile attack on Thursday, but again “got something wrong.” By the way, the 540 regiment covers Lvov, and our “Caliber” hit its military-industrial facilities. Well, from Lviv to the Ivanovsky district in the Brest region – about 250 kilometers. For a rocket flying at a speed of 1800 meters per second, such a “misfire” is nothing.

To the question: was the Ukrainian air defense missile shot down from Belarus or did it fall by itself? – The republic’s military department has not yet responded. But they promised.