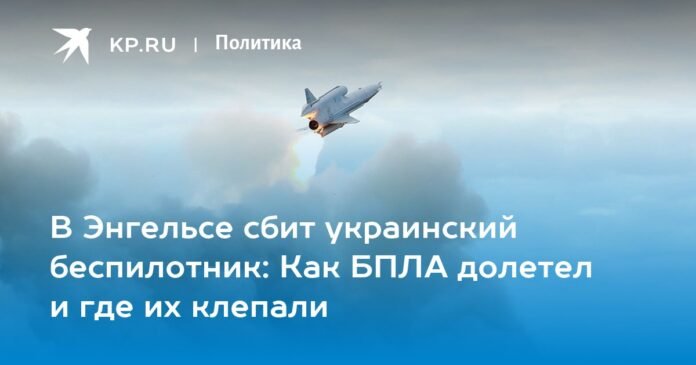 In the area of ​​u200bu200bthe Saratov city of Engels, the Russian air defense system was brought back into operation, another object was shot down, which is believed to have been launched from the territory of Ukraine.

The governor of the region, Roman Busargin, wrote on his Telegram channel that a drone was shot down, the fragments of which damaged a car, a garage and a fence of a private house, and also broke a window on a balcony. According to the head of the region, there were no victims, the eviction of children’s institutions was not carried out.

In Mikhail Antonov’s program on Radio Komsomolskaya Pravda, we discussed the problem of long-range Ukrainian drones that, not for the first time, reach the city of Zavolzhsky, where the serious combat aviation of the Russian Air Force is located, with Military TASS. observer, retired colonel Viktor Litovkin.

– And what flew there again?

– It looks like the Strizh drone, still of Soviet production. Ukrainian flag, apparently, have already “shot” at the Engels airfield.

– Was he a scout or was he carrying ammunition?

– Most likely it was a reconnaissance aircraft converted into a cruise missile. Initially, it was a scout who had to fly with a radius of up to a thousand kilometers, photograph the target and return, dropping film cassettes. But here we see that the Ukrainians, with the help of their curators, were able to turn these jet-powered UAVs into attack drones.

– Can a drone of this type be controlled remotely?

– He’s out of control. Establishes the flight program and return. He had to get to Engels on “autopilot”. But there he turned out to be hit by our air defense.

“But why didn’t the air defenses land it earlier?”

– We do not have an air defense system at each step. It is not surprising that it can break through areas where there are no continuous barriers of the air defense system. Of course, there are similar things around big cities, defense, economic facilities, and on the front lines. For example, the same Strizh Tu-141 drone flew to Croatia this spring and flew there through NATO countries. And no one not only did not notice, but did not shoot him down. There is nothing surprising in this. And there is nothing to blame our military for.

– You can upload it – but what’s the point? Well, they will detect the flight of a drone, and then what?

More than a hundred of these drones were produced at the Kharkov Aircraft Building Plant. If we have not yet discovered the Ukrainian warehouse where these UAVs are located, if we have not yet destroyed this aircraft factory, they will probably continue to fly.

– The “Swifts” arrived, but where did the “Bayraktars” go?

So they don’t fly that far! 150 kilometers maximum. “Strizh” is a long-range Soviet-style product. Turkish “Bayraktars” are not allowed to fly from Ukraine to any Engels. And “Pantsir-S” deals with the “Bayraktars” at once. You just need to carry out enhanced combat duty.

According to several military experts, the Engels was attacked by the Soviet drone Tu-141 Strizh (more)