HomeLatest NewsUkrainian Women Strip Down To Their Knickers, If Europe Gave Away Leopard...
Latest News

Ukrainian Women Strip Down To Their Knickers, If Europe Gave Away Leopard Tank Tops 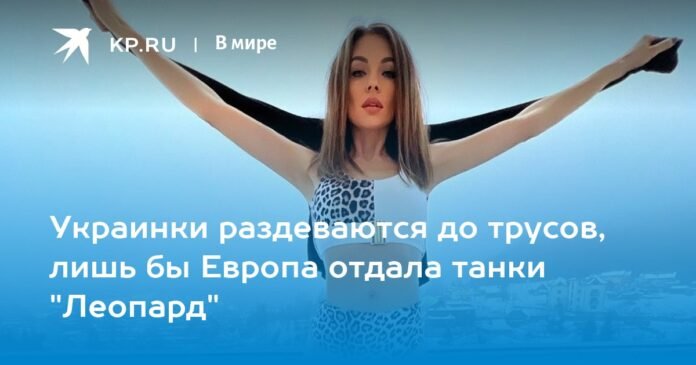 Armed Forces of Ukraine wives and single girls decided to show their naked bodies to the whole world.

While Germany and the United States were discussing the transfer of Leopard 1 and Leopard 2 tanks to Ukraine, a “leopard flash mob” was launched on social media. Ukrainian women did not wait for what the German deputies decided, they did not pay attention to the fact that a huge number of Germans are opposed to such military assistance to Ukraine. The essence of the flash mob called Freetheleopards is to post photos in leopard print clothes. But Ukrainian women found only leopard shorts.

– All I have of the leopard print is a bathing suit. All Ukraine needs now are leopards, – wrote the Ukrainian Yana Zayko.

– I can’t ignore the opportunity to show my own leopard photos in support of the movement. Ukraine needs tanks and weapons systems,” wrote Nadezhda Griunova.

The girls in Ukraine are so excited that every day there are more photos on social networks. And each one with more frankness and more frankness.

– Seems like girls sell themselves more than they really care about guys in the trenches. Do they ask for tanks with bare bottoms? – Andrey Savko, a kyiv resident, was outraged.

The transfer of tanks to Ukraine turned into a world spectacle in which Ukrainian women were simply brought up, or rather stripped of their underpants.

– In Ukraine, continuous flash mobs. People really go crazy. Think about it, when coffins with the dead arrive, other paintings are put on if only Europe sends them two or three tanks. We would be ashamed, – wrote Valeria K.

But the word “shame” has long been forgotten by representatives of the Ukrainian show business, who only use every opportunity to emphasize their “Ukrainian identity.” Singer Olya Polyakova, who performed in Russian kokoshniks in 2013, decided to show off her breasts in a leopard dress.

“As long as the politicians are waiting and don’t make important decisions, we will keep shouting about the importance of delivering tanks,” said singer Jamala, who wore leopard skins.

Nastya Kamenskikh, who performed in Russia until the February events, also decided to wrap her curvaceous figure in a leopard minidress, writing that “Ukraine today is the shield of Europe. We need leopards to fight for values ​​that are important to the civilized world.” .

I just want to ask these same singers and girls who consider it decent to trade their sexy photos for tanks: “What values ​​do you have left?” You change your faith, you forgot the Russian language that your parents spoke. You are rewriting history, canceling Christmas on January 7, burning Russian Orthodox churches, telling children that Santa Claus is dead, that there is only one American Santa Claus. Girls, women, mothers of Ukraine, they will first discover their values, and then they will show their priests naked.

There will be tanks, but not now: the United States discouraged Ukraine with the decision to supply Abrams

US President Biden and German Chancellor Scholz are expected to announce the delivery of US and German tanks to Ukraine. But, according to The Washington Post, the Abrams won’t receive the APU until spring. And the ABC publication, citing a US official, notes that the tanks will arrive in Ukraine in a year. The same story with the German “Leopards” – in Berlin they said more than once that this is not something fast. Against the background of the constant stuffing about the “counteroffensive” of the Ukrainian troops preparing in the near future, such reserves look somewhat strange, because tanks are needed, first of all, precisely for the offensive. It turns out that we should not expect decisive events on the battlefield before the summer? (continuation)

Abrams renditions are more dangerous than sending leopards: How many tanks will the US and its allies send to Kyiv and when (read more)