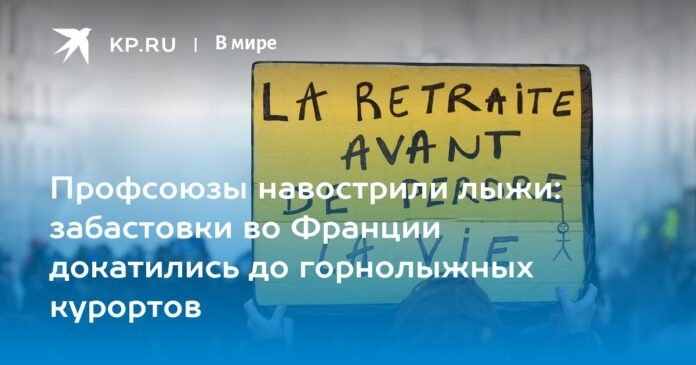 Protest against pension reform in Paris.

Amid discontent over the pension reform that has begun in France, local unions are looking for effective ways to make their demands known. Now the protest is growing. Workers who maintain the ski lifts at ski resorts have announced an indefinite strike starting January 31. The union organizations Force Ouvriere (Fuerza Obrera) and CGT (General Confederation of Labor), which have joined the actions at the national level, represent the interests of more than 97% of the 17,000 employees employed in this area.

The situation is aggravated by the fact that February in France is traditionally a month of vacation. This is what the protesters are counting on. Eric Becker, a spokesman for the Force Ouvrière workers, said the unions are calling for a strike during the peak season to get the demands heard. The aim is to exert pressure, draw attention to the problem and give slope workers the opportunity to join national demonstrations.

Not only holidays in France are threatened. Courchevel and Meribel are preparing to host the Alpine Ski World Championships in February. Unions prepare for “decisive action” during the competition. The extent of his determination remains a mystery.