HomeLatest News"United Russia" on the front and back
Latest News

“United Russia” on the front and back 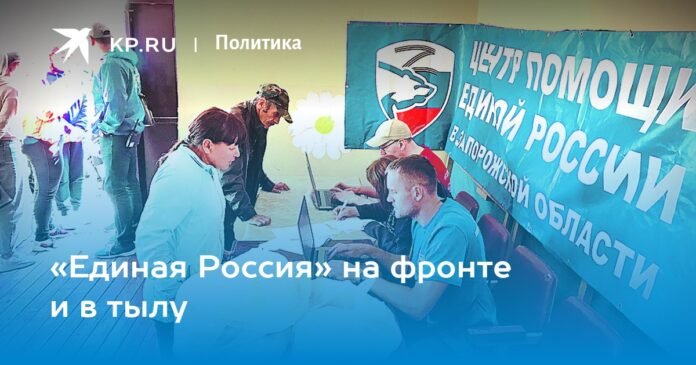 We admit it: today’s Russia and the 2021 model are two different countries. It could not be otherwise. A special military operation in Ukraine, a partial mobilization, unprecedented Western sanctions, a reversal of export flows to the East… All this required a global and timely adaptation of the legislative framework. And United Russia managed to carry it out. In 2022, the party faction in the State Duma prepared about 30 important bills for the country, which were approved.

SPECIAL OPERATION WITHOUT FINE AND SANCTION

Perhaps the most impressive package of legislative changes concerns the special military operation. All members of the NWO, including volunteers, recruits, and civilian personnel, can now receive combat veteran status and related social benefits and support measures. Among them, a monthly payment in cash, benefits when paying “communal”, preferential travel in transport, sanatorium and medical care, tax benefits and more.

CBO participants are guaranteed the preservation of their jobs. Simply put, after demobilization, they will be able to return to the same organization and the same position in which they worked before entering the military service under a contract or mobilization.

They are also entitled to vacation credit, including sole proprietors and their families. In addition, the accumulation of penalties, interest and fines during the holidays is prohibited. Individual entrepreneurs and legal entities have the right to transfer their business to the trust administration or simply keep its registration unchanged for a while until the owner is demobilized.

The payments of the SVO participants were protected from cancellations in execution proceedings, the suspension of judicial and administrative proceedings against the participants in the special operation and the prohibition of the seizure of their accounts was ensured. In addition, a moratorium has been established on penalties for non-payment of “communal” and sanitation contributions.

Participation in the SVO will be included in the pension experience at a double rate, even to receive a preferential pension. In addition, the party ensured that the period of conscription in the military was taken into account when allocating an early pension, which is available to men with at least 42 years of service (before the reforms, only periods of work and sick leave). Keeping in mind).

Disabled fighters received the right to free social services. The law, prepared by United Russia deputies, expands the rule on this measure of support to disabled people, participants in the SVO.

Andrei Turchak, Secretary of the General Council of United Russia:

United Russia was the first party to launch a large-scale humanitarian mission in Donbass and the liberated territories, now our new regions. We could not stand by and leave our people, the Russian people, to face misfortune. We continue this work. And together we will restore the regions, we will return peaceful life to the primordially Russian territories. To the victorious!

CHILDREN AND PARENTS HAVE THE RIGHT

We will briefly describe other important legislative initiatives.

Children from 5 to 7 years old have the right to travel for free on commuter trains. Children with disabilities: free two meals a day, regardless of the form of education (at school, boarding school or even at home).

Parents had the opportunity to go to hospitals for free with disabled children who have restrictions on self-care and education. Thanks to the new law, these parents are now entitled to free room and board.

Volunteers can now claim compensation for damages to life or health they received while extinguishing fires, participating in emergency and disaster relief, helping refugees, and searching for missing persons.

The legal status of the St. George ribbon as one of the symbols of military glory is established. For the public desecration of the Saint George ribbon, he will face criminal and administrative responsibility.

The maximum sentence of life imprisonment is established for pedophiles for repeated acts of violence against all minors, not only those under 14 years of age. Life imprisonment has been introduced for similar offenses against two or more minors, as well as if the specified offense is associated with the commission of another serious or especially serious crime.

But the work of the party is not limited to legislating. Since the first days of the military special operation, United Russia has been providing large-scale assistance to the evacuated residents of Donbass, as well as those who remained in the LDNR, in the Kherson and Zaporozhye regions. The party’s regional branches have already delivered more than 16,000 tons of humanitarian cargo to new regions. There are more than 40 United Russia humanitarian and legal aid centers operating there.

The Party also delivers aid to the front. In October alone, more than 1.2 billion rubles were raised for the purchase of special equipment, quadcopters, drones, communications equipment, thermal imagers and equipment for front-line fighters.

Since the beginning of the SVO, teams of Russian volunteer doctors have been formed, including deputies of various levels. Since the announcement of the partial mobilization of volunteers, about 250 United Russia deputies at various levels, including the State Duma, have gone to the zone of special operations.

Since March 30, a combined detachment of activists from the United Russia Young Guard and the Fighting Brotherhood Volunteer Company has been constantly stationed in Donbass. MGER opened its representative offices in LPR, DPR and Zaporozhye. In total, more than 1,500 activists from both organizations went through the party’s voluntary and humanitarian mission, and in December 2022 the 25th landing of volunteers took place. 84 activists from MGER and the Volunteer Company went to the front as volunteers or on compulsory military service.

#NOSJUNTOS united to help the families of the mobilized. Volunteers provide one-stop-shop support. During the work of the joint aid headquarters, more than 6,000 applicants, relatives of mobilized citizens, applied to them. Basically, the close members of the SVO ask for the accumulation of due payments, the additional provision of equipment, business advice, if the summoned citizen was the owner of the company, as well as household assistance.