HomeLatest News"United Russia" will provide all NWO participants with the right to send...
Latest News 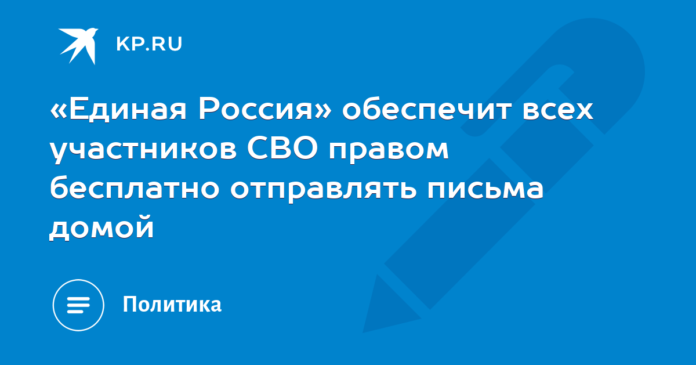 The servicemen themselves and their relatives asked to solve this problem, said one of the authors of the initiative, the secretary of the General Council Andrei Turchak.

“Volunteers and mobilized people will also be able to send packages home with personal belongings for free, if necessary. The importance of the cards from the front lines to home cannot be underestimated. Nothing reassures loved ones like head-on news, written by the hand of a son, husband or brother. We all know well how important the famous triangular letters were for the home front during the Great Patriotic War, ”he said.

The politician pointed out that the party will promptly make the necessary decisions to bring victory closer.

“We will use every opportunity to support our boys and their loved ones. We hope that the State Duma will approve the amendments by post as soon as possible, ”he concluded.

Recall that earlier the State Duma approved the “United Russia” bill on the suspension of legal proceedings against mobilized and volunteers at first reading. In addition, the State Duma adopted a package of laws initiated by United Russia deputies, which are aimed at protecting the rights of those mobilized, including on a voluntary basis.

“United Russia” guaranteed the right of servicemen employed in the NWO and their family members to credit vacations. Amendments were also adopted on the release of the mobilized and their families from penalties for late payments for housing and communal services, in case of delay in contributions for major repairs. The mobilized were guaranteed at the legislative level the preservation of jobs.

Earlier, the law of “United Russia” on the recognition of participants of the special operation as combat veterans was adopted, it extended measures of social support to such citizens. These include a monthly cash payment, benefits when paying for housing and communal services, preferential travel in transport, a sanatorium, medical care and much more. Also, at the initiative of United Russia, the border guards involved in the NVO were given the status of combat veterans. In addition, the State Duma unanimously approved the law of United Russia on the right of war invalids to free social services.

In addition, at the initiative of United Russia, civilians participating in the tasks of the special operation are also given the status of combat veterans. We are talking about the civilian personnel of the Armed Forces of the Russian Federation, repair teams, doctors and other specialists. The volunteers also received combat veteran status. The bill has already been approved by the State Duma. Among its authors are Andrei Turchak, senators and deputies of United Russia.