Up to five years for desecrating the Saint George ribbon and banning biometrics against will: Vladimir Putin signed new laws 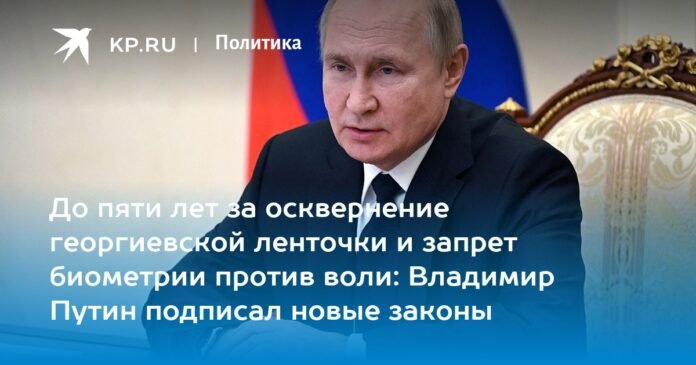 The use of the ribbon is allowed not only on May 9, but in general at all events dedicated to memorable dates, patriotism, spiritual and moral education, etc.

There are no specific rules for using the tape. It is written that the local authorities themselves should decide everything “on the basis of necessity.” Citizens may also wear the ribbon “based on the need to secure their status as a symbol of military glory.”

At the same time, the law does not explain what is considered desecration of the St. George ribbon. Tie it to a car antenna and drive it for six months, so it’s all worn out and covered in mud. Is this a desecration? Many motorists do this. Or throw on a phone case in the colors of St. George, then carry your phone in the back pocket of your jeans. It has the Pope. Some girls do this. It is not clear if these people are facing a criminal offense or not.

Now citizens can go to the MFC and demand that their biometric data be deleted if they have ever submitted it. And banks, notaries and other authorities should accept citizens with a simple passport without voice recording without restrictions. Discrimination based on biometric data is prohibited!

Nor can you force yourself to give biometric data. Until now, only a 3D photo of a face and a voice recording are considered biometric data. DNA sampling is not expected.

Biometric data still collected should be stored only on the territory of the country and only by official authorities. And this applies only to a single all-Russian system. The conditional private gym can still take photos of customers to access the gym without contact.

Since 2018, the Unified Biometric System has been operating in Russia. In theory, it allows Russians to confirm their identity remotely, without a personal appearance and the presentation of a passport. The technology will be able to recognize a person by face and voice.

What it looks like: You arrive at a place where biometrics are taken (in the beginning, banks were doing this), your voice is recorded, and a three-dimensional image of your face is taken on a 3D camera.

Also, as prescribed by law, you can go to a bank, to a notary, to the authorities, etc. without a passport, and there they will have to confirm their identity through biometric data. And the Russians have already had a unique opportunity for four years, although there are still very few places where they can really take advantage of it.

Here are some other laws signed by the president:

– Russia and Belarus have agreed on the general principles of taxation of indirect taxes. This is one of the important programs for the creation of the State of the Union.

– Russia recognizes all court decisions of the LDNR, Zaporozhye and Kherson regions or Ukraine that entered into force before September 30, 2022. All executive documents issued by courts under the former government are “subject to execution.”

– If a volunteer dies in the new territories, his relatives will be able to receive compensation of 5 million rubles. 3 million for an injury.

– LDNR businessmen can bring imported alcohol into the country without tax stamps. But with one limitation – they definitely need to send all alcohol to the people’s republics and mark it there. You can sell alcohol only in the territory of the LDNR.