HomeLatest NewsVaccination against measles: how much works, when and who to get vaccinated
Latest News

Vaccination against measles: how much works, when and who to get vaccinated 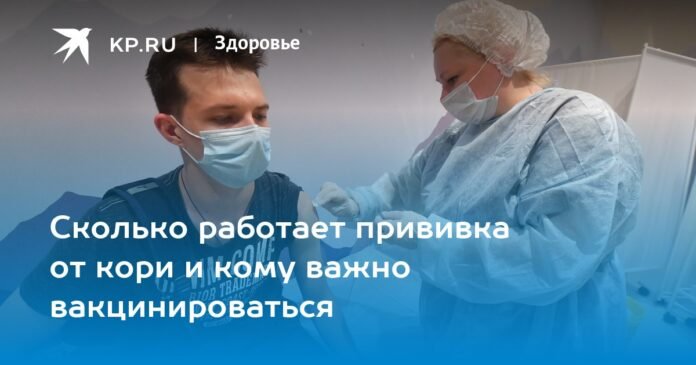 The need arose because during the years of the covid pandemic, herd immunity to this infection has been drastically reduced. In early 2022, the WHO sounded the alarm at all. Then, in January and February alone, the incidence of measles in the world increased by as much as 79 percent, but Russia resisted. The epidemic did not happen. Last year ended for us at the level of 34 measles cases, the director of Rospotrebnadzor Anna Popova told Komsomolskaya Pravda about this. However, already at the beginning of this year 2023, an outbreak of infection occurred in the Novosibirsk region. 45 people got measles, 17 of them were children.

Now we are talking about cases of imported infection from abroad. Official reports emphasize that the measles epidemic does not threaten us, however, immunity in the population has developed over the years without a pandemic. To prevent the spread of the disease, the vaccination campaign will include not only the country’s citizens, but also migrant workers.

“It is extremely important to vaccinate everyone who is not vaccinated,” Andrei Prodeus, a pediatrician, doctor of medical sciences, allergist and immunologist, emphasized in a conversation with KP.RU. – The higher the percentage of people who are not protected by the vaccine, the greater the scope of the measles virus to find a new home in the human body and spread further, and even acquire mutations.

The opinion that if a person was vaccinated in childhood, and now he is protected for life is incorrect, says the doctor.

– Immunity to vaccination: it is, in most cases, finite. Cells in the body no longer remember the pathogen they trained against. It’s like practical skills. You can learn something, but if this skill is not practiced, then it is forgotten. Same with vaccines. Immunity to the influenza virus is less resistant in terms of immunity, to hepatitis B – it lasts 5-6 years, to measles – an average of 10 years. Therefore, getting vaccinated or re-vaccinated is important for both children and adults. After all, an adult, even if he himself does not get very sick, will be a wonderful carrier of infections.

Measles is a rather dangerous disease, especially with its complications and unpleasant. The disease can cause pneumonia and inflammation of the heart and brain. The virus itself is transmitted only between humans. The disease is initially similar to SARS or usual influenza. As a rule, cough and conjunctivitis quickly join general malaise with fever, headache, muscle aches, sore throat, runny nose.