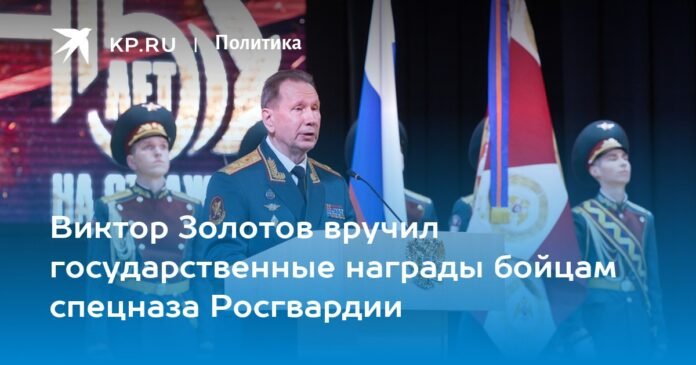 The head of the department presented state awards, including 6 Orders of Courage, to members of the National Guard, who distinguished themselves in combat missions, and thanked the members of the National Guard for “the courage, determination and high professionalism demonstrated in the performance of combat missions during a special military operation.”

“The military doctors of the National Guard will do everything possible for the speedy rehabilitation of the fighters and their return to service,” Zolotov said.

In turn, the awardees expressed their desire to continue their service and defend their homeland.

Among them is Private Mayirbek M., an officer of the National Guard of the Chechen Republic, about whom KP has already spoken. The warrior lost his left leg while on a combat mission during the SVO, but found the strength to set a personal record in track and field. Another of his achievements were 164 jump ropes.

From the hospital, the director of the Russian Guard attended an event honoring the anniversary of the Vityaz Russian Guard Special Purpose Center, which has been carrying out combat missions to destroy extremists and terrorists for more than 45 years.

Before the start of the solemn meeting in the hall of the house of the officers’ garrison “Reutovo” a minute of silence was declared in memory of the fallen soldiers.

The director of the National Guard broke the moment of silence: “Being at the epicenter of all key events in modern Russian history, Vityaz soldiers and officers flawlessly perform the most difficult combat missions, always remaining true to the motto “If not me, then who?”

Zolotov emphasized that “the next page in the glorious combat chronicle of the special forces center, of course, was the participation of Dzerzhinsk soldiers in a special military operation.”

“Headed by the Hero of Russia, Colonel Alexander Beloglazov, the Knights show special courage and bravery in battles against neo-Nazis, leaving no doubt that they will achieve all the goals set for the troops by the Supreme Commander-in-Chief” . emphasized the director of the National Guard.

Victor Zolotov expressed his gratitude to all the personnel of the special forces unit “for impeccable military service and successful fulfillment of the tasks set by the state.”

For the military merits of the special forces, the head of the Vityaz Russian Guard Special Purpose Center, the Hero of Russia, Colonel Alexander Beloglazov, was awarded the badge of the Marshal Star Club of military leaders, and the knights of the forces special received the Order. of Courage, medals for Courage and departmental awards.