HomeLatest NewsVitaliy Korotich: Why do Americans hang out with us? They are...
Latest News

Vitaliy Korotich: Why do Americans hang out with us? They are worse 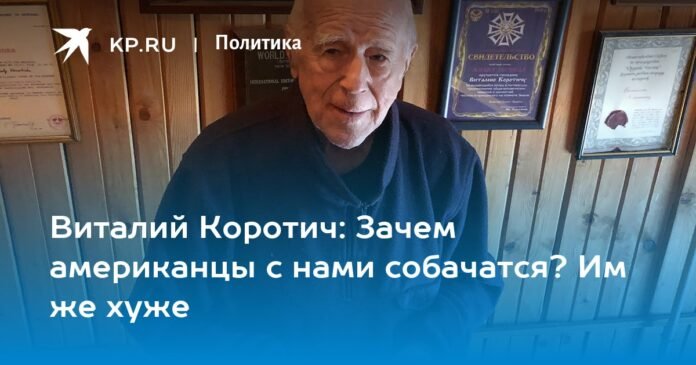 – Vitaly Alekseevich, I feel sorry for the Americans. According to the latest data, 57 people have already died there in snowfall, in snowfall, in snowfall. And his president, Biden, and his wife Jill flew to the island of Santa Cruz in the Caribbean, to sunbathe, not even interrupting their vacation. How would you rate all this?

And when people freeze during the winter, it is very bitter, terrible.

– Absolutely agree with you.

– You know, now I am again looking through the information related to the World Cup, which ended not so long ago. And after which our President congratulated the President of Argentina for his victory in this championship.

And I immediately read on the Internet: “Well, good. Now, if the French won, they would never congratulate anyone.”

– It’s not a fact. Politics is politics and football is football. In addition, in the last year, Putin and Macron met more than once in person and spoke on the phone…

All this is due to the fact that we, in many cases, have lost the habit of rejoicing and crying for others, from the bottom of our hearts.

It’s terrible that people in the United States freeze to death. You just have to express your regret and tell them… Well, what can I say? Come to us to warm up, and let’s count on the fact that we will warm each other up, not chase each other and not scare each other with “possible nuclear explosions.”

So we are not scared. And what’s more, we don’t have dogs. That’s all, they are, if we talk about the Americans. It’s all Biden…

– When such unfortunate events occur (we are talking about the death of people in the USA – AG) – of course, the president must be in the center of what is happening.

Well what could it be? He could come, sympathize, sigh.

I think the president is always ready for any event.

– Recently I was very surprised, I was simply amazed by one fact.

It turns out that when the American astronauts were on the moon, President Nixon had a speech written in advance, in case they couldn’t make it back and died there.

Let’s not think about sad things…

– And let’s say to the same Americans: guys, it’s bad that everything is arranged in such a way that people who freeze cannot be saved to the last.

Well, for those who were saved, we will rejoice and cry together with those whose children or relatives died.

Let’s think about it.

– We’ll think about it… And the Americans?

That is when they will show solidarity with our accidents, and we, theirs, will already be a piece of normalization of life and relationships between us.