Vladimir Putin made an important appeal to the head of China 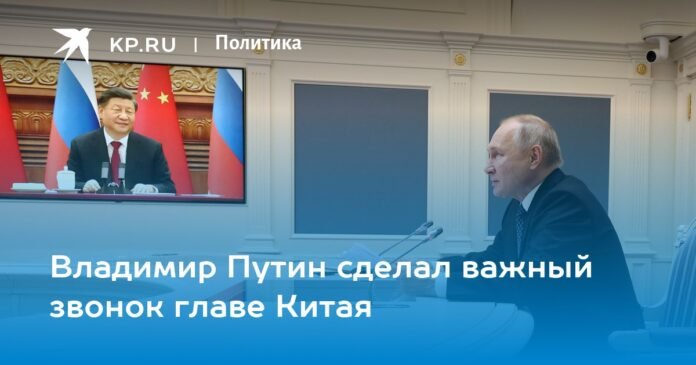 Good relations with Beijing are extremely important to us now. This was felt from the beginning of the conversation:

– Dear President Xi Jinping, dear friend! I am very glad to welcome you and see you, – Vladimir Vladimirovich said at the beginning of the video call with China.

Putin does not say so many warm words to all politicians in the first seconds of a conversation.

“We are developing a very good tradition of speaking via video link at the end of the year, summarizing the work and outlining plans for the further development of Russian-Chinese relations, the Russian-Chinese strategic partnership,” the Russian leader said. .

The politicians have clarified how they see the roles of the two countries in international politics. The fact is that the Russian leader has repeatedly declared multipolarity and the right of different countries to follow his own path. But President Xi at the 20th Autumn Congress of the Communist Party of China spoke directly about the bipolar world, where the main decisions remain with Beijing and Washington.

But during the conversation, both Putin and the head of China confirmed our partnership.

– In the context of growing geopolitical tensions, the importance of the Russian-Chinese strategic partnership as a stabilizing factor is growing. Our relations adequately withstand all tests, demonstrate maturity and stability, continue to expand dynamically, – said Vladimir Vladimirovich.

“In the face of a challenging international environment, we stand ready for global cooperation and partnership,” President Xi said.

Heads of state noted the growth of trade. This year it has grown by a quarter! Chinese companies are actively filling the niches left by Western companies.

Putin recalled that by 2024 there was a plan to reach a commercial turnover of 200,000 million dollars. There is a very good chance that we will hit this indicator sooner. True, even so, until recently, we were not among Beijing’s top ten trading partners (Russia 11). In the summer, the United States was in first place by a wide margin, and India was in tenth place.

President Xi was called on an official visit to Moscow in the spring.

“This will demonstrate the strength of relations, it will become the main event of the year for bilateral cooperation and the most important in the international political arena,” Putin said.

At the end of the open part of the conversation, Vladimir Vladimirovich congratulated his colleague on the upcoming usual New Year and on the Chinese New Year.