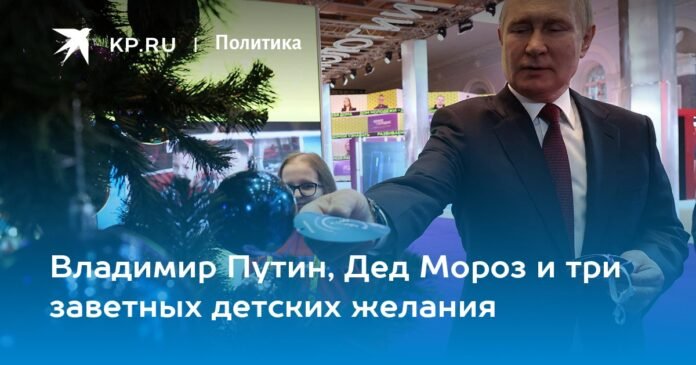 On December 22, Vladimir Putin devoted himself entirely to children. First, the president came to the Manege for an exhibition of youth projects, and then took part in the “Wish Tree” action.

The exhibition in the Manezh turned out to be not small, so the organizers gave the head of the country a tour. First, he was shown a book with school essays by children from Donbass, where they shared their dreams about the future.

– Many guys managed to finish school, entered the university, and then worked at the front. Now in Moscow, 50 students are undergoing rehabilitation after their injuries, – said one of the exhibitors.

A schoolboy involved in programming showed his computer game about a girl who chooses higher education. Another high school student boasted that he wrote 105 ecology fairy tales and it’s published in the Young Naturalist.

Well, Vladimir Vladimirovich, among such an abundance of youth initiatives, could not bypass a novice businessman.

“I have my own company: I model wooden figures on a computer and then cut them out on a machine tool at school,” said one student.

– How do you sell? Via Internet? asked the president.

– What are the models?

– Ford Mustang, Ford F-150, Tesla… – the guy thought, remembering what else is short.

– niva? – prompted the head of the country.

ALL DECENT PEOPLE FOR FATHER FROST

Later, the president participated in the “Christmas Tree of Wish” action. This is when balls with the wishes of seriously ill children are hung on a festive tree. Everyone can take one or more to complete it, making the child happy.

– Alexander Titorenko from the Zaporozhye region. She dreams of visiting the Crimea and visiting the house of Santa Claus. So Santa’s house is not in the Crimea! – surprised the heads of the country.

The organizers explained that the boy had two wishes. He recorded them both.

– Penalty fee. That is what we will do,” the president agreed.

The second wish was from a boy from the Kurgan region, who dreamed of riding a reindeer and looking at the northern lights.

The third is from David Shmelev from the Stavropol Territory. A 6-year-old boy wanted to visit the Military Academy of the Armed Forces.

– We will do everything! And we will try to do it quickly,” promised the Russian leader.

A girl asked Vladimir Vladimirovich if he believed in Santa Claus.

– Of course! But how? All normal, decent people should believe in Grandfather Frost,” Putin joked.

KNOWLEDGE AGAINST THE INTERNET

After graduating from Manezh, the president chaired a meeting of the State Council on youth policy. At first, he paid tribute to volunteers helping in new regions.

– I especially note the volunteers who support our military personnel and their families, who, at the behest of their hearts, sometimes risking their health and lives, help civilians in the zone of a special military operation. Such loving and – I’m not afraid of the word – brave guys, of course, they are an example for many, many young people in our country, the Russian leader said.

Then Putin admitted that young people surfing the Internet “came under a flurry of information attacks and found themselves in a very vulnerable position.” Apparently schools and universities are instructed to respond to this.

– Our task is to provide the youth of Russia with solid support in the form of reliable knowledge, said the head of the country.

– The young person is subjected to the pressure of other people’s values. But we are winning! The vast majority of young people are proud of the country and represent a strong family, said Dmitry Artyukhov, governor of the Yamalo-Nenets Autonomous Okrug and chairman of the Youth Policy Commission of the State Council.

– Our main objective is the preservation of traditional values, their transfer between generations. And the result – not the number of events, but real changes in consciousness. It is important for us that the guys were patriotic, – said Razuvaeva.

The President will give the floor to everyone, and then congratulate them on the imminence of the festivity.

– I want to congratulate all members of the State Council of Russia, staff members, all regional teams on the upcoming New Year, – said Vladimir Vladimirovich.

Share
Facebook
Twitter
Pinterest
WhatsApp
Previous article
Ministry of Energy of Ukraine: it is possible to restore the country’s energy system by the summer, but in the absence of new strikes KXan 36 Daily News
Next article
Kate Middleton and Prince William get new titles

Alphabet’s profits fall 21% and its shares respond with falls