HomeLatest NewsVoices from the interior of Ukraine: “People are angry, nerves are on...
Latest News

Voices from the interior of Ukraine: “People are angry, nerves are on edge. Everyone knows that Russia cannot be defeated, but they are not negotiating.” 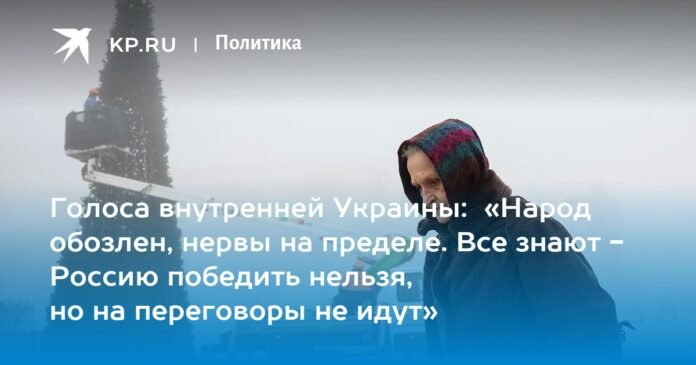 A kyiv woman against the backdrop of a New Year tree installed in the center of the Ukrainian capital.

“I WOULD BE BETTER IMMEDIATELY IN THE BANK BANK”

“The same thing happens to us… in a word, it stinks! The light is given by the clock, very little and mostly at night. The heating is almost nil. The houses are damp and cold. The first people of the region recommend everyone to move to the village. AHA! And whom? In the village now you can’t even rent a barn if there is a stove in it. In addition, in our area, if you speak Russian, then it’s not that they won’t give you the corner, but they will explain where you need to go, you Muscovite bastard.

This is a letter from a Russian resident of Kyiv on one of the telegram channels. It is anonymous, which is natural: few people in the Ukrainian capital would dare to say such a thing.

“People are angry. Everyone’s nerves are on edge. And patience too, – continues the author. – The most stubborn bought calendars and now they cross out the days: like, you have to put up with ninety days until spring. But most are discouraged. At first they clung to hatred, they say, we will win! And now, sadness and desolation. If we run out of light at all, then despair will set in. I can’t imagine what will happen then.

I bought lanterns, battery-powered garlands, candles. Bottled water is already in the garage. There is a 200 liter barrel in the bathroom. I have a kerosene heater, happy as an elephant! Preparing for everything.

More and more often they say among themselves that it would be better if the Russians immediately attacked Bankova (the street in Kyiv where the president’s office is located. – Ed.) and ruined the whole team, along with Zelya, then, you see, negotiations would begin. Everyone understands that Russia cannot be defeated. And you can fight him endlessly.

Painted concrete blocks for New Year’s festivities in the center of Kyiv.

And how many more Ukrainians should die? Von der Leyen said about a hundred thousand dead. For many, this came as a shock. They don’t want to believe it, but I think it’s true. You pass the cemetery – only a forest of badges on the graves! There are already two deaths in my class.

I try to keep my spirits up. Read books. You can read them by candlelight, just like in the 19th century. I communicate with few people, many have become strange, not interesting…”

THE CHILDREN ARE ALL UKRAINE

We have included this letter with almost no abbreviations because it is unique. Today, in the Ukrainian groups of social networks, you will not find such revelations because of the “tape”. Calling for the removal of Zelensky is like calling the SBU brigade home. The Ukrainian authorities openly try not to scold. Although no, no, it does make its way. This is what another anonymous kyiv resident writes:

“The power supply has just begun to improve, as the “zakhisniki” (defenders in Ukrainian. – Ed.) are again provoking the Russian Federation in missile attacks. And then they will talk about “all the missiles were shot down” on the news, while you are looking for where to get food from a frozen refrigerator and where to go to the fuck: to the nearest park, or still try, as in bag memes If I ever meet with one such “zahisnik”, where there are no people and no cameras around (in the same park, for example), I will kill him. But for now, they go everywhere in herds.”

And here is Oleg Filippov from the small homeland of Zelensky, from Krivoy Rog:

“People, look at Gordon’s interview with Bogdan (the former head of the president’s office. – Ed.) In which the latter stated that they (the Ze gang) came from another business. do you understand? The uncle slipped away according to Freud: they were coming from one business to another. And now their business is breeding fools, and the fools are you and me, this is all of Ukraine. Thank you, 73 percent of voters are unlucky (many percent voted for Zelensky in the presidential election. – Ed.)”.

But Dnepropetrovsk (in Ukraine this city is called Dnepr), where the news flashed: they want to demolish the monument to the great pilot Valery Chkalov.

“Nonsense,” Yevgenia Sunzuokhina, a resident of the city, reacted succinctly to the news. And then another user, a certain Aleksey Goncharuk, slipped a “trick question”: “Well, who is this Chkalov for the Dnieper?”

“Goncharuk, Google will help you,” Evgenia replied. – For me, he is our history, considering which country Ukraine has been a part of since 1919. And who is John McCain or Elizabeth II for the Dnieper? Answer yourself, it is not necessary. And why only monuments? You can start with power plants, Khrushchevs and Stalinkas, then there will be no need for arrivals. I am worried about something else: how many barrels of water can be supplied, how many powerbanks can be bought for the elderly… Or how is this action different or the demolition of the Pushkin monument from the burning of books in Nazi Germany or destruction? of the temples by the Bolsheviks? Nothing for me.”

“So that food does not spoil in the refrigerator during a long power outage, put bottles of pre-frozen water on the shelves,” advises Elena Kolesnikova from Krivoy Rog.

“Our government is done playing with sabotage,” kyiv resident Andrei Stupak writes in response. – They are with the light. We’re pouting.”

Electricity, heat and generators are now the main theme of the whole Ukraine. In the rolling blackouts, many residents see a flagrant injustice. They realize that the fan does not go through everyone. They suspect that while they sit in the dark, the authorities continue to sell electricity abroad, making a profit.

“Turn off those houses that never turn off completely. And then they strangle them with darkness”, writes Olga Zamkovets from Poltava. According to popular belief, buildings and offices are not turned off, in which, for example, mining farms that “grow” cryptocurrency are located. These distributors, they say, pay for the blackouts online.

“St t. Generala Zakharchenko 14 (Dnepropetrovsk. – Ed.), – writes Olga Shirokova. – The house consists of 4 entrances, electricity is supplied to the 1 and 2 entrances around the clock, and the 3 and 4 sit regularly without electricity, there are always blackouts! How unfair it is!”

“DO NOT TAKE ODESSITOS FOR IDIOTS”

Will Odessa’s electric transportation be replaced by buses that don’t need electricity? Here is the response of one Odessan under the nickname Shura Balaganoff: “Do not hang noodles in your ears and do not hold Odessans for idiots. Bus fares are more expensive and there are no discounted fares for retirees.”

“The imbalance in the power systems was created by your greed and mismanagement throughout the independent years (independent years – ed.). The transformers are on fire, the wires are on fire, the specialists have been fired, but the call centers are multiplying so that, God forbid, they themselves do not have to talk to subscribers! ”, This is written by a woman from Odessa.

Here Poltavateploenergo is pleased to report that it plans to provide generators to all boiler rooms. In addition to the largest, the Aurora boiler house, you need a whole mini-power plant.

“So what are you suggesting that people contribute to the power plant, or what? asks Vera Karemushka. – That the authorities put less in the pockets and have for everything.

Bust of President Zelensky at a street market in Lvov.

Generators are not only light, but also trouble.

“Call for help! In the courtyard on Bohdan Khmelnitsky street 65 neighbors installed gas generators in the garages. The noise is crazy, rattles so that the glass in the apartment shakes with the windows closed. The police do not respond. Where to go, who will help?

None! Generator owners will be watched with the only feeling – envy. Such units are even released in apartments, the whole house is covered with smoke and nothing …

People are more concerned about another danger:

“Yesterday, a generator was stolen from General Petrov’s gym. Today, the situation is the same in Semyon Palia’s cafe, two devices were stolen at once, – Irina writes from Odessa. “I knew they were going to steal them from me.” They are on the street without supervision. And now they’re so expensive.”

The police are calling for action to make access to the devices impossible. But not all do:

“Dear Krasnopolye residents, we have thieves! A generator was stolen from our yard on Novopartizanskaya Street yesterday. A great request to everyone who knows or heard that someone is selling a generator, please let us know. After all, tomorrow they can climb into your garden.

Here is more crime news: Krivoy Rog. A guy throws a grenade into the hostel. When it first happened, everyone thought of that “arrival”. Ready to curse Russia. But it turned out that the unfortunate lover decided to take revenge on a rival womanizer. And weapons now in Ukraine are a dime a dozen. And lots of comments. “With idiots like that, you don’t need Russians”, he is the most harmless.

But there are also messages that divert all other discussions to the background:

Every day there are more and more cries from desperate people.