HomeLatest NewsVolcanic activity has increased dramatically on Earth. What is the danger...
Latest News

Volcanic activity has increased dramatically on Earth. What is the danger of volcanic ash for aviation? KXan 36 Daily News 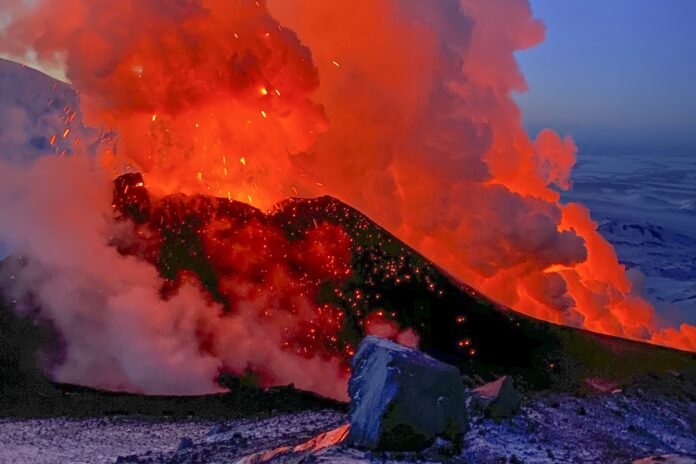 Volcanologists recorded a powerful ash ejection 5,500 meters high from the Shiveluch volcano in Kamchatka on the first day of the new year. This was reported by the press service of the Main Directorate of the Russian Emergency Situations Ministry for the Kamchatka Territory. And on January 2, according to the Institute of Volcanology and Seismology of the Far Eastern Branch of the Russian Academy of Sciences, the Ebeko volcano in the Kurils spewed ash 2 km above sea level. The ash column extended for 5 km to the north of the volcano.

According to media reports, in the last month, volcanic activity has increased dramatically in various parts of the planet. Then, almost on the same day, the Italian volcanic island Stroomboli, Mauna Loua in Hawaii, and Semeru on the island of Java in Indonesia began to erupt. Volcanologists say that the increase in activity is not accidental: most of the explosive points on the world map are part of the Pacific ring of fire. Including Kamchatka.

As scientists warn, millions of tons of ash released into the atmosphere threaten air travel. Why is volcanic ash dangerous for airplanes? This is what Valery Shelkovnikov, president of the International Flight Safety Advisory and Analysis Agency, told RG:

– Those particles that pose a danger to aircraft float at a critical height for aviation of 8-12 kilometers. By breaking into the engines, they can quickly disable them. A famous case: in 1982, a British Airways Boeing 747 that got caught in a cloud of ash from a volcanic eruption in Indonesia lost all four engines. It was only by a miracle that the tragedy was averted.”

ICAO experts believe that flights are not safe with any concentration of ash. Even the lowest. Currently, meteorological satellites continuously track the situation with clouds of volcanic ash. They are assisted by balloon-launched weather stations and lidar-equipped ground stations. And easier: laser locators. All data is quickly processed and delivered to air navigation services around the world.

Are there international recommendations that detail the actions of crews and airlines in such situations? As Valery Shelkovnikov says, there is a common ICAO document, the title of which speaks for itself: “Volcanic ash. Contingency plan.” Guidelines have been developed for aircraft crews and air traffic controllers on actions during volcanic activity. This is especially important when taking long-haul flights. Pilots have to choose a route around the source, or “dive” under the cloud, or, conversely, fly with climb. Appropriate instructions are transmitted on board.

But it should be noted that the realization that information about volcanic eruptions should be passed on to aviation services did not come immediately. And only after three cases of passenger planes falling into clouds of volcanic ash, a new direction appeared in the study of phenomena affecting the safety of flights.

– British Airways Speedbird 9 flight operated on the route London/Heathrow – Mumbai (India) – Madras (India) – Kuala Lumpur (Malaysia) – Perth (Australia) – Melbourne (Australia) – Auckland (New Zealand). On June 24, 1982, while on this route, the crew of a Boeing 747 took off from Kuala Lumpur en route to Perth, Australia. The track passed through Indonesia, where the Galungung volcano had been erupting for several months.

At 20:40 Jakarta time, the co-pilot and the flight engineer (the captain went to the bathroom) noticed a glow similar to the St. Elmo lights on the cockpit windshields. Despite onboard weather radar showing an atmosphere devoid of hazardous phenomena, the crew turned on the engine anti-icing system and the “fasten seat belt” display. Other events were very fleeting.

Smoke began to accumulate in the passenger cabin, which at first was mistaken for cigarette smoke (then smoking was still allowed on planes). However, the smoke was getting thicker and it clearly smelled of sulfur. Passengers sitting by the windows near the engines noticed that they began to glow an unusually bright blue, and a glow formed behind them.

At 20:42, the fourth engine began to work, and the ignition of the fuel mixture soon stopped. The crew shut down the engine, went through the appropriate checklists, shut off the fuel supply, and activated the fire extinguishing system. Less than a minute later, at 20:43, after the storm surge, the ignition of engine No. 2 stopped. In a few more seconds, engines No. 1 and No. 3 stopped almost simultaneously, thus, shortly Over a minute, the crew completely lost engine thrust.

Without it, when sliding, the Boeing 747 is capable of climbing every 15 kilometers with a loss of 1 kilometer in height. The crew quickly calculated that from an altitude of 11 kilometers, which the plane was following, it could glide another 169 kilometers and be airborne for 23 minutes. At 20:44, the crew issued a distress call, but the phrase “four engines failed” was interpreted by the Indonesian controller as “fourth engine failed.” The situation was corrected by the crew of a Garuda Indonesia flight on the same radio frequency, but the controllers did not see the Boeing in distress label on their screens, although the crew put the distress code 7700.

Due to the rather high mountains of the southern coast of Java, the plane had to pass the coast at an altitude of at least 3500 meters. The crew decided that if it was not possible to resume engine operation before reaching 3,700 meters, then they would turn the aircraft toward the ocean and attempt a water landing, which was highly undesirable in the dark.

Numerous attempts to start the engines followed, but to no avail. Despite the fact that the crew was solving urgent problems and there was absolutely little time, the captain turned to the passengers with a message, which was later called “a masterpiece of hints”:

As the pressure in the cabin dropped with no engine thrust, the oxygen masks fell off. However, one of the pilots broke the hose connecting the mask and the oxygen tank. The captain immediately decided to descend at a speed of 30 meters per second to a height where it would be possible to breathe without oxygen.

At an altitude of 4,100 meters, the crew understood that they would soon have to make the decision to change course and move towards the ocean to make an emergency water landing. Although there were instructions for this, no one in the history of the Boeing 747 had previously performed water landings. But at 20:56 another restart attempt was successful: the fourth engine started. The crew managed to make the descent path less steep. Soon the number 3 engine started up, which made it possible to even go on a climb, albeit insignificant. But then the other two engines also began to work – the crew rushed to gain altitude in order to safely overcome the ridge.

However, with the increase in height, the lights of San Telmo reappeared in the windshields. The crew reduced the engines thrust, but the second engine came back up and shut down. The crew immediately descended to 3,700 meters and continued to follow them at this altitude.

Approaching Jakarta, the crew realized that almost nothing could be seen through the windshields. Despite the excellent visibility, the approach was carried out exclusively with instruments. Since the ground equipment did not give an indication of altitude, the copilot measured the distance on the rangefinder equipment and informed the commander what the altitude was at that moment.

Through a small hole in the windshield, the crew was able to see the runway lights, but the aircraft’s headlights were not working. The landing, however, was made safely, but the crew was unable to taxi because they could not see anything.

Subsequent investigations determined that the aircraft had entered a cloud of volcanic ash. Because the ash was dry, weather radar, designed to detect moisture in the atmosphere, “didn’t see it.” The ash created a sandblasted effect, so the transparency of the portholes was lost. Ash settled and built up hot engines, causing them to stall.

After the engines were stopped and cooled under the airflow, the accumulated layer of ash began to flake off and allowed them to restart. The crew managed to do this, as one of the onboard generators and batteries were still running and allowed the fuel mixture to ignite.

After this incident, Indonesia temporarily closed the airspace in the area of ​​the volcano, but after a few days the restrictions were lifted. However, on July 13, another Boeing 747, from Singapore Airlines, also entered the volcanic ash cloud, causing three of the four engines to shut down. Only after that the airspace was completely closed and the ash clouds were monitored.

The investigators also found that the Speedbird 9 incident was not the first: on April 5, 1982, a DC-9 plane from the Indonesian airline Garuda entered the ash cloud of the Galungung volcano.