Walk in familiar places. Onishchenko warned how to behave during terrible bad weather 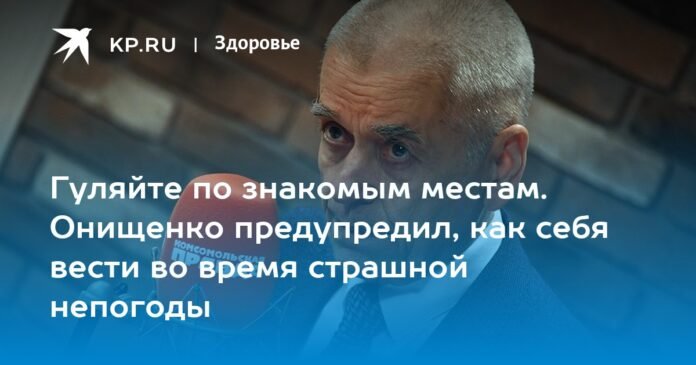 … – Gennady Grigorievich, but frosts are coming, and in Moscow it will be up to 30 degrees, they say, closer to 6. And in Russia they are already cracking, very strong. What are his recommendations on how to avoid frostbite?

– First of all, I would like to remind you that today in Moscow and in the Central European part of our country there is a lot of ice. There was a thaw, everything melted, and now it has caught frost.

And here is the snowfall. And he is plagued with all kinds of injuries.

So I ask everyone very carefully, without excessive reassessment of their own capabilities, especially as we continue to have extended vacations, to move less.

At least until the utilities fix things.

– And those who drive too, because you have to be careful.

Of course, this also applies to them.

So today I was driving to work; well, you can still drive around the Garden Ring in Moscow. But somewhere near the shipyards there the situation is not very simple.

– That is, the snow is not cleaned.

Second. In fact, a strong cooling is expected. And the number you mention…

– This temperature, in principle, corresponds to the normal course of winter during this period.

– Now winter, rather, does not flow, but sweeps!

– Do not forget that after January 7, the Nativity of Christ, the next holiday will be Epiphany. And on Epiphany we are always cold.

– What do you recommend?

– The first thing you should pay attention to is to dress according to the weather, especially for young people. And then somehow they prefer a light version of clothing.

Second. Now we have a favorable moment: most of these days we are at home.

– So, I would like those who have such opportunities, and we have them, the vast majority … These are the midday walks that we always plan on such days, to wear, but only when properly dressed. And, to move along the familiar routes, if you wish, each one has its own.

Their own park, their own square, where they usually like to walk, but at the same time, you need to pay attention to the condition, including the surface, processed, unprocessed, cleared, not cleared…

– That is, we are talking about sidewalks for passers-by.

– The most important thing is not to panic. The decrease is strong, but corresponds to the long-term average temperature regime that is characteristic of our strip.

You too, Alexander Petrovich, take care of yourself.

– You too, Gennady Grigorievich.

– Well, I’m still at work, then I’ll go to a meeting and go home. But you’ll be looking for hot information…

– I have already found it. Thank you.

– Yes. All the best. I wish you a Happy New Year. And on the eve of our Orthodox Christmas, this should also be remembered once again that we are already living in 2023.