“We are too nice to Estonia.” Former attorney general went through strange statement to get money out of Russia 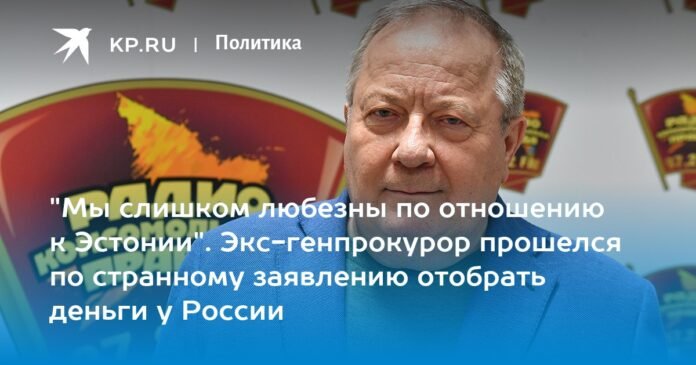 According to news agencies, Estonian authorities are now working to transfer frozen Russian assets worth 17 billion euros to Ukraine, Foreign Minister Urmas Reinsalu told Postimees. He did not specify when Kyiv could receive the money.

Reinsalu acknowledged that this mechanism still does not work, although the EU countries have already instructed the European Commission to draw up the necessary legal scheme for it.

“We have decided that we will simultaneously start creating a legal structure that will allow the use of this money,” Reinsalu said. According to him, Estonia’s actions “will become a precedent in international law.”

… – Yuri Ilyich, but can you somehow comment on these Estonian steps – stupid and contrary, in my opinion, even to common sense?

– I can say that while the European Union is working on a mechanism for the withdrawal of Russian money (frozen in Western banks. – AG), Estonia seems to want to speed up this process.

And at the same time, using the possibilities of their national legislation, they are trying to give some kind of pseudo-legal form to these actions that they plan to take in relation to Russian assets.

– And what – can these “pseudo-lawyers” somehow seriously deceive the brains of specialists in international law?

– Alexander, of course, these actions, even if they are clothed in the form of Estonian laws, will not become legal and fair from this.

I’m not talking about elementary justice.

Because they clearly contradict the general legal principles on which the West, as a whole, is based: this is the principle of sacred and inviolable private property.

Well, and then, there is one more thing to consider…

If there is investment money, then, as a rule, they enjoy most-favoured-nation treatment, that is, additional legal protection.

Apparently, the Estonian authorities plan to worry about all this and “be ahead of the pack” in terms of attempts to steal the financial resources of Russia and its citizens at the state level.

– And what steps can Russia take here?

– Well, it must be admitted that our country has been behaving excessively, I would say, kindly towards Estonia for quite some time, as well as towards all the Baltic republics in general.

This began from the moment when a third, and about 40 percent of the population of these states, which had Russian roots, mostly Russians, became “non-citizens.”

This is clearly discriminatory.

We swallow all these hostile movements.

I am not talking about the further steps associated with an attempt to blockade Kaliningrad.

True, Lithuania later (according to the recommendation of the EU. – AG) made some concessions.

But in short, we are talking about the fact that these three Baltic states (Lithuania, Latvia, Estonia) are, in a way, mongrels of Western imperialism. As it were, they are trying to outdo each other, which of them will cause more harm to Russia, both to our country and to our citizens.

Therefore, of course, here, apparently, the situation is brewing in such a way that measures and an economic plan are needed.

I think that our Foreign Ministry here “owes” a lot of retaliatory measures to the Baltic countries, and in this case, specifically to Estonia.

– What do you think, specifically – what measures can these be?

– The most diverse – from decisions related to the restriction of economic cooperation and – ending, let’s say, with control over the flow of Baltic citizens – to our country.

– What do you have in mind?

– Now many residents of the Baltic countries, since products are cheaper in Russia, calmly come to us and buy them in practically unlimited quantities.

It is high time to put things in order here – it would be necessary to implement a whole series of difficult decisions that our Ministry of Foreign Affairs and the Ministry of Industry and Trade could develop and propose to the Russian government.