“We drag two-meter boards for Vysotsky”: a famous climber about what surrounded the famous film “Vertical” 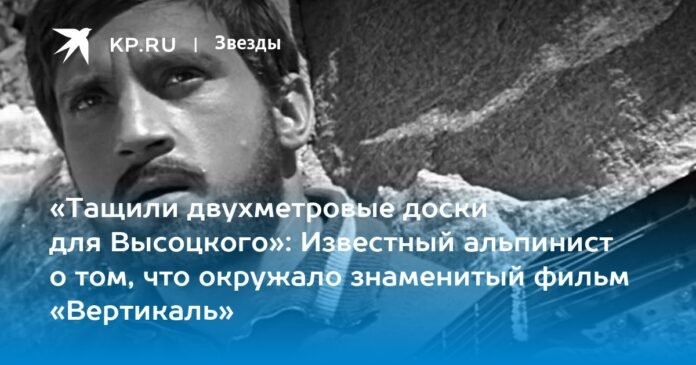 Vladimir Vysotsky on the set of the film “Vertical”.

On the eve of the 85th anniversary of Vladimir Vysotsky, KP.RU contacted the vice-president of the mountaineering federation, the snow leopard Ivan Dusharin, whose group 56 years ago helped set up the camp for the filming of the film ” Vertical”, after the premiere of which the bard and actor of the Taganka Theater was recognized by the whole country.

– How old were you then?

– 18. I was a first-class student when the movie “Vertical” was filmed.

– Did you participate in the filming?

– No, from the climbing camp “Shkhelda” in the Elbrus region, we went to the next ascent in the Shkhelda gorge, there is a glacier there. There is a moraine on the glacier, called the German night camps, where a base was organized for the film crew of the film “Vertical”.

– Did the director Govorukhin and the actor Vysotsky already get there?

– This was before the arrival of the artists. Before the ascent, we youngsters were given two each, and the strongest three two-meter boards.

– At first we were outraged: why do we need additional charging? We are already loaded. But the head of the training unit came out and said: guys, a movie about climbers will be shot here; we need help, they will be based in German camps. These tables will be placed there, tents will be set up, and the artists will live in them. Well, not on the rocks.

– Did you bring these boards there?

– Yes, they left it in the indicated place, and then they continued the ascent. The year was 1966. And on our boards the whole crew of the film “Vertical” was sleeping. After us, the boys came and knocked down their shields. Moreover, these shields lay there for another 15-20 years. It is at an altitude of 2500-2600 meters. The Shkhelda Glacier is the beginning of the Ushba Icefall. Terrible and heavy ice fall.

– But didn’t the group live there all the time of filming?

– They actually lived in the Itkol Hotel. Then it was the only hotel in the gorge, in Terskol. They were taken from this hotel and dropped by helicopter onto the glacier, and at night he returned them and took them to the hotel.

– What else do you remember?

– And what did they explain to you?

– That when the film “Vertical” was filmed, this tree spoiled the overall picture. They’re filming a serious ascent, and here some kind of tree sticks out, but it can’t grow that high. And the tree that spoiled the image was cut down.

– Have you met artists?

– We came across your doubles, guys – professional climbers. This is the level of CCM and Master of Sports. They were filmed in long shots on the rocks, in motion. When we were going through the pass to the Adyr-su gorge at the end of July, a group came to our camp, they told us that we had to locate the boys so that they could spend the night here in our camp. We fed them, put them up, and at night they began to sing Vysotsky’s songs.

– Did you hear them for the first time?

– For us it was a shock. For us, the songs were completely new. To be honest, then they caused us a little … such a misunderstanding. Then, in mountaineering, there were more lyrical songs, songs by Vizbor, who himself was a mountaineer, skier. And Vysotsky’s cut lines were not very well received then. The guys sang three songs with a guitar and went to bed.

– Were they understudies-professionals, and did the artists themselves learn to climb?

– Vysotsky and the entire film crew were trained for the mountaineer’s badge. They made the ascent. The instructor who trained them, Gotovtseva Maria Frolovna, is 92 years old today. In general, there were several instructors there – they taught the group mountaineering, knots, rocks. The artists fully complied with the norm. That’s where Vysotsky got this feeling of real mountains. When I asked Gotovtseva how Vysotsky was doing, she said: “Well, a good boy, disciplined. Well prepared physically, I had no complaints against him. And she believed that he dedicated the song “Rock Climber” to her. She was only 7 years older than him.

Share
Facebook
Twitter
Pinterest
WhatsApp
Previous article
In the Novosibirsk region, a large family received an apartment in an emergency building KXan 36 Daily News
Next article
Why hasn’t my pension been raised? Social Security explains it