“We feel confident.” Vladimir Putin answered questions from journalists about the results of the year for Russia KXan 36 Daily News 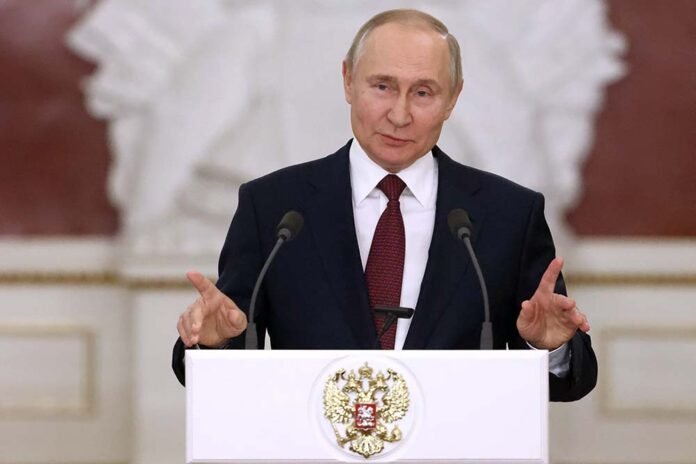 About the state of the economy.

The press conference began with a balance of the outgoing year. Putin noted that ideal situations never happen, Russia, according to him, this year has passed with confidence. “We do not have any concerns related to the fact that the situation that has developed today will prevent us from implementing our plans for the future, including by 2023,” he said.

Putin pointed out that the devastation and catastrophe that was predicted did not happen. “In addition, Russia is performing much better than many G20 countries,” he said. For example, the decline in GDP turned out to be lower than forecast, not -2.9%, but -2.5%. Unemployment is below pre-pandemic levels: then it was 4.7%, and now it is 3.8-3.9%.

“The labor market is stable, public finances are stable, there are no moments of alarm here either. This did not fall from heaven, this is the fruit of the work of the government, regional teams, businessmen and the spirit of society, which shows unity and the desire to work together to achieve common goals”, – says the president. The main task now is to raise the level of real wages in the country.

On the supply of weapons to Kyiv

Many questions in connection with the recent trip of Ukrainian President Volodymyr Zelensky to the United States concerned the supply of new weapons to Kyiv. Putin said that the US Patriot anti-aircraft missile systems are quite old systems that do not work like the Russian S-300s.

“They say they can put the Patriots in there now. Well, let them put it. We’ll click on the Patriots too. Then it’s going to need to put something in place of the Patriots, it’s going to need to develop new systems. This is a long and complex process, not everything is so fair,” Putin said. He also said that the military resources of NATO countries are not on the verge of exhaustion, but their Soviet stockpiles of weapons are running out, as Russia almost completely “knocked out” them in Ukraine. The President of the Russian Federation also called the possibility of Kyiv switching to NATO-style weaponry a “big question”, noting that the corresponding process is very laborious. “We need to prepare, we need to train personnel, we need to have stocks parts, we need to service it and fix it,” he said.

On the participation of the United States and the division of the Russian world.

Putin said that Washington has long been involved in processes in the post-Soviet space, and entire institutions worked in Ukraine in Soviet times. “In Soviet times, the ground was being prepared, people were being searched for, meanings were being determined, etc.,” the president said. Putin noted that everyone understands where the current US policy towards the Ukrainian conflict comes from. “This is a very delicate question – the unity of the Russian world. “Divide and rule” – this slogan has been in force since ancient times and is still actively used in real politics. Therefore, our opponents have long dreamed of this and They have always been involved in this: they tried to divide us and then lead individual units,” the Russian leader explained. He added that if the United States brought the situation to the current events in Ukraine, then in this sense they achieved their result. “But we also had no other choice than the actions that were launched at the end of February this year, – Putin emphasized. – Yes, that is the logic of the development of events, but our goal, first of all, is to protect people, I repeat once again, let them feel part of our people, of our culture, except us. But we will do it and we will do it,” Putin stressed.

On the possibilities of negotiations with Kyiv

Vladimir Putin responded to a question from Rossiyskaya Gazeta about whether there are real chances for a diplomatic resolution of the situation in Ukraine. The head of state expressed the hope that Kyiv will realize the need for negotiations as soon as possible.

“All armed conflicts in one way or another end with negotiations through diplomatic channels. But we have never refused. This leadership of Ukraine has prohibited itself from negotiating,” the president recalled. According to him, this approach “seems somewhat unusual” and “strange.” “Sooner or later, the parties to the conflict sit down and come to an agreement. The sooner those who oppose us realize this, the better,” Putin said.

Russia is striving to end the military conflict in Ukraine as soon as possible. “Our goal is not to turn the wheel of a military conflict, but rather to end this war. We are fighting for that,” the president said. “And the sooner the better,” he added. The President added that the intensification of hostilities leads to unjustified losses. “A chicken pecks grain by grain,” Putin said.

About the heroes of the NWO

Putin noted that the Russians participating in the SVO are all heroes, they demonstrate colossal work associated with a danger to health and life. At the same time, there are those who show special facts related to personal heroism, the President stressed. “We will definitely do what we set an example for our entire society. It is these people who strengthen the inner spirit of the nation. Of course, there are many of them. You probably know them yourself. And we still don’t.” I don’t know some of the names. We will not name it, but we will definitely do it,” Putin explained.

Russia’s goal is not to turn the wheel of the Ukrainian conflict, but to end it

The President also said that he himself meets with the military every day. “Every day, so you understand, every day,” he stressed.

On the maximum price of oil and gas

One of the most discussed topics in the economy is the maximum price of Russian energy resources. Putin believes that such behavior on the part of the West could lead to the destruction of the global energy industry and skyrocketing prices against the background of insufficient investment in the fuel and energy complex. As a result, this “will hurt those who are trying to implement these tools.”

Putin believes that the ceiling on oil and gas prices is “a throwback to colonialism.” “The well-being of the United States grew with the slave trade and the use of slave labor, then with World War I and World War II, but they are used to stealing, and now attempts at non-market regulation in the economy are the key”. the same colonial robbery. In any case, an attempted colonial robbery. But the world has changed and it is unlikely that they will be able to today,” Putin said.

On the attack on the Nord Stream

The president said that those interested in transiting Ukraine are behind the terrorist attack on Nord Stream. “This is an act of international terrorism, I would say state terrorism. Why? Because individuals, individuals and individuals by themselves, without the support of state structures, are not capable of carrying out these types of attacks, ”he explained.

To find the culprits, Putin advised to look in the direction of the states interested in this. “Whoever is interested in supplying Russian gas only through Ukraine blew it up,” the president explained. He also expressed his surprise that a full-scale investigation of gas pipeline explosions is not being carried out. At the same time, according to Putin, Ukraine continues to receive money for the transit of Russian gas. “We pay them, and despite the fact that they call us aggressors, although they themselves are aggressors against Donbass. We counteract the aggression, and not the other way around. They take money and nothing, money does not smell,” Putin stressed.

On business and patriotism

The president said that the West is trying to turn representatives of Russian companies against the state with the help of sanctions. “They put everyone under sanctions, Western, pro-Western or non-pro-Western, they all fit one size. So that? To restore business against the state, ”he said. Putin added that people who live and earn money in Russia “must live in the interests of the country.” “And if a person does not connect his life with this country, but simply takes money from here, and everything is there, when he does not value the country in which he lives and where he earns, but values ​​​​good relations where he has property and money for accounts, such people are a danger to us,” the president said. At the same time, he believes that the vast majority of representatives, including big business, are patriots of Russia. “Everyone strives not only to stay and work in Russia, but for working for the good of our country, preserving labor groups, their companies, developing the economy, etc.”, concluded the president.

The President also said that there will be no Address to the Federal Assembly this year, but he will definitely announce it in the new year. “The dynamics of events is very high,” Putin explained. “Therefore, it was difficult to record the results at a specific time and outline plans for the near future. We will do it at the beginning of the year, of course.” .”