HomeLatest NewsWe Got Richer By The Buckwheat Index And Poorer By The Banana...
Latest News

We Got Richer By The Buckwheat Index And Poorer By The Banana Index: How Our Lives Have Changed, By Various Indicators 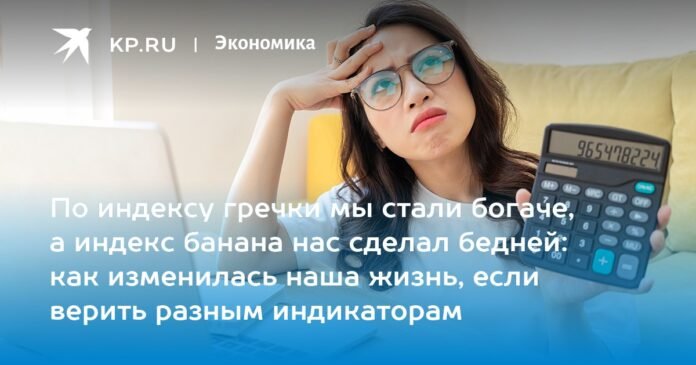 We remember not only the most popular indices, but also invented several of our own.

The Olivier index has deteriorated, the herring index under a fur coat has risen up the throat, the Big Mac index has left Russia altogether. We are talking about the indicators with which economists and other smart people traditionally summarize the results of the year. Offering us to judge by these indicators what our life has improved and what has worsened. And we decided to look at economic life from a different angle. And they remembered not only the most popular indices, but came up with several of their own, maybe a little less serious, but indicative.

Let’s start with the official statistics. According to Rosstat, at the time of writing this report, the consumer price index in Russia was 12.35%. That is, it is in this percentage that prices have increased throughout the year.

Although this index says a lot about our lives, prices “in general” are a very abstract indicator. Here you have potatoes with beets and TVs with cars, and even a vacation to Southeast Asia in a bottle. It is no coincidence that analysts constantly come up with more specific indices that are more interesting and understandable to ordinary people. Let’s move on to them.

But what are we all about food? How are our prices for sanitary and hygienic products? To find out, we took Rosstat data on basic hygiene supplies and calculated the average price increase. 36% came out.

It was also counted by Rosstat. The most traditional New Year’s salad, or rather, the ingredients for it, increased in price by an average of 8.53% during the year.

Why have Olivier’s prices lagged behind official inflation? Here we appreciate the rich harvest this year. In 2021, at the end of the year, the prices of vegetables, the main ingredients of the popular salad, skyrocketed.

There is no such thing this year. Also, compared to late last year, vegetables and eggs even dropped in price.

Although it was not without a fly in the ointment – sausage, pickled cucumbers, peas and mayonnaise were added to our festive salad. These products have gone up in price.

This popular index is used to compare the purchasing power of different currencies. Big Mac: Also found in Africa (Asia, America) Big Mac, with the same ingredients. It can be used as a measure: if a Big Mac somewhere is too cheap in dollar terms, then the local currency is undervalued and should grow in an ideal world. And vice versa.

But this year the British magazine The Economist, which usually publishes this index, did not calculate it for Russia. For obvious reasons: McDonald’s has left us, and you can no longer buy a Big Mac for 1/6 of the lot. But, unlike The Economist, Komsomolskaya Pravda found a way to calculate this indicator!

Last year, during the life of McDonald’s in Russia, our Big Mac cost 169 rubles. The network “Vkusno – i dot”, which became the successor to the American company, has not yet invented an analogue of Big Mac. They promise that it will appear at the end of winter, presumably under the name “Big Hit”. Meanwhile, on the new import substitution menu, the Double Grand burger is more similar in composition to the Big Mac burger. Sesame seed bun, two cutlets, cheese, pickled cucumbers. There is not enough lettuce leaf, and instead of the branded sauce, banal ketchup with mustard. The price is now 253 rubles. So consider our “Big Mac index” – + 49.7%. That is, the hamburger added almost 50% of the price. We will assume this is our import substitution payment.

Expert console: the main difficulties for the Russian “hamburgers”, related to the restructuring of business on the fly, already happened this year. So everything will no longer rise in price at that rate.

What are we about alien burgers? Everyone gets fat on them, except wallets. And in general, we have our own “borscht index” invented in Russia. About the “borscht set”, the vegetables necessary for this soup, has been remembered a lot and often lately. Last winter, they rose to record prices (as already mentioned, due to a poor harvest). Cabbage in 2021 became the champion in price growth – more than double! Potatoes in 2021 have risen in price by more than 50%, carrots – by about a third.

So this year you can rejoice. Prices for the “borsch set” from heaven have dropped a little to earth.

The only problem is that we are used to putting a piece of meat in borscht. And it spoils everything: since the beginning of the year it has risen in price by more than 15%. A saving option is to make borscht without meat. And that, recently, analysts from the Danish Saxo Bank, famous for its forecasts of economic shock, predicted the emergence of the first vegetarian country in the world. Only the name was not specified. Maybe it will be Russia? With such and such prices for beef … However, there is another option – to replace beef with pork. Its value for the year has not changed much.

Life looks so much better when seen through an eggshell. Especially this year. I don’t know what you’re thinking, but this year’s egg rate is one of the most optimistic. But we decided to go further and take into account the reduction in prices of both eggs and chicken meat in one indicator. And at the same time, we answered the main philosophical question: what fell more in price, an egg or a chicken? What are you saying? Was the question originally asked differently? But what is the difference now? Most importantly, the index turned out great!

This is our favorite index, which we invented a few years ago. So that? And because the banana has long been the most affordable fruit. And he was very pleased: everything is getting more expensive, and bananas are getting cheaper! You start to compile a “carrot index” – horror. And with a banana, life seems to be almost a success.

But this year is different. For many years I tormented experts with the question: how come bananas abroad are cheaper than apples that grow in every country house? Well, the “error” has been corrected, bananas have risen in price by more than 20% since the beginning of the year. All due to difficulties with logistics: the world’s leading transport companies refuse to deliver goods to the Russian Federation, and bananas from distant South America have to be transported indirectly. And apples, thanks to our industrial orchards that finally appeared in our country, rose in price by only 1.8%.

What has changed in our lives in a year, according to various indicators.

And for a snack – well, of course, where are we without buckwheat? For an ordinary Russian, this is not just cereal. A kind of indicator of the economic situation. For example, politicians can say all they want how wonderful life is for us. But if buckwheat becomes more expensive, it means that there is a crisis in the country. Take your bags, we have to go shopping. Do you remember what was going on in grocery stores in late February and early March? Is the same.

According to this national indicator, the country is prosperous and prosperous. Since since the beginning of the year cereals have fallen in price by 5.4%. True, this is explained, as with vegetables, by the fact that last year it increased significantly, and this year we are satisfied with the harvest.