HomeLatest NewsWe keep the defense - we will help the body to cope...
Latest News 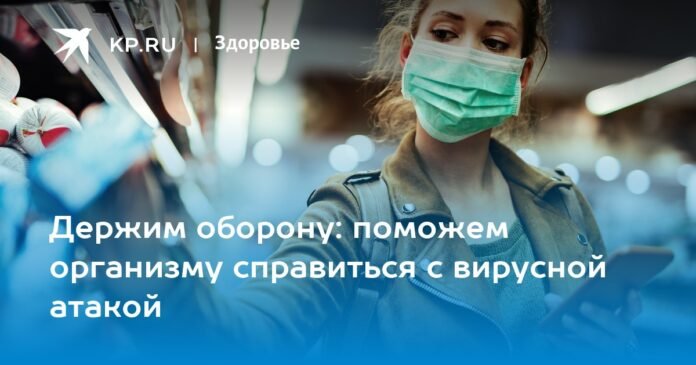 Viruses are attacking. The covid, which has already become familiar to many, has been joined by “old friends”: the flu and seasonal SARS. The Ministry of Health believes that so far, in most cases, the infections are relatively mild. But even with a mild course, they can provoke an exacerbation of chronic diseases, warns Oksana Drapkina, independent chief specialist in therapy and general practice at the Ministry of Health.

Virus triad in one season

Rospotrebnadzor registers a dangerous upward trend in the incidence of respiratory infections. Over the past week, ARVI and influenza have sickened almost a quarter more Russians than the previous week. The incidence of a new coronavirus infection has also grown by almost 12%. The most unpleasant thing is that any SARS, flu and covid can attack the human body at once and at the same time, “depleting” the immune system and increasing the risks of possible complications.

According to Drapkina, during the current autumn-winter season there are cases of serious respiratory infections, “requiring hospitalization, associated with the risk of death or complications.” Among the possible complications, the expert called angina pectoris due to coronary disease (heart muscle disease due to blood circulation problems) or dizziness due to cerebrovascular disease (impaired cerebral circulation due to problems in the blood vessels).

The popular theory of the six handshakes boils down to the fact that “the world is small” and we all know each other indirectly (on average through a chain of five people) in one way or another. In the case of viruses, sometimes a handshake is enough to trigger a series of infections and perhaps even a pandemic in the outside world.

The determining factor in the outcome of a fight with a dangerous viral triad of the winter season 2022-2023 for a person may be the degree of his physical and prophylactic readiness to deal with infections. Everything is extremely simple: try to eat right and include vegetables and fruits rich in vitamins in the diet; breathe fresh and icy air daily on walks; do not forget to ventilate the premises, as well as wash your hands regularly; avoid crowded places and, if this is not possible, be sure to wear medical masks, remembering to change them every 2 hours; Do not neglect the flu and coronavirus vaccines, they can save your life!

And special antiviral drugs recommended by the Ministry of Health for this case can become a powerful additional tool for antiviral protection. His list is quite large. For example, one of these drugs is Arbidol. Experts call it safe, citing dozens of trials, both in the lab and in clinical practice. And the study of any drug is already a big problem.

Practice shows that the same pills and medicines do not affect all people one hundred percent in the same way. It is known, for example, that depending on a person’s age, how his metabolism works, including stress level, gender and chronic diseases, medicine will help someone quickly and well, but not so much for someone. And there is no guarantee that the drug will work on you in the same way as, for example, on a certain author of a review about it on the Internet. Therefore, the comprehensive study and a maximum of clinical studies conducted according to world standards are the benchmark in the world of medicines that you should always take into account when choosing, for example, how to alleviate the symptoms of a ” cold” or a headache.

Of drugs whose pros and cons are well known to the scientific community, you know what to expect. And, if the same well-researched antiviral drugs are said to be “broad-spectrum and active against a wide variety of viruses, including covid, influenza, rhino, and adenoviruses,” then they are.

By the way, among the drugs studied, as they say, from and to, the researchers name those that contain umifenovir. In medical practice, they are considered to show good activity against many viruses. This pharmaceutical substance was invented by Soviet scientists in 1974. And then there was that school!

For many years and very closely, various research institutes around the world studied the Russian invention and in 2013 the World Health Organization (WHO) included it in the international drug classifier: in the group of drugs with direct antiviral effect. In 2020, with the advent of COVID-19, the WHO experts were convinced that it was not for nothing that they gave the green light to Soviet development. In the treatment of patients of the covid hospital in Wuhan, the doctors actively used, among other things, Russian antiviral drugs. By the way, people who received them recovered faster than those who were treated according to a different scheme. The thing is that the molecules of the substance umifenovir (part of the well-known arbidol) do not allow the virus to multiply in the human body and prevent it. penetration of viruses into cells. Russian scientists were able to simulate the process of interaction of drug molecules with virus particles and demonstrate the ability to block it.

Experts recommend the use of antiviral agents. Especially if you get sick or have been in contact with a sick person. In this case, it is necessary to start taking the drug and consult a doctor for further treatment recommendations, the specialist advises.

Share
Facebook
Twitter
Pinterest
WhatsApp
Previous article
The Central Bank commented on the unfreezing of NSD assets by Luxembourg KXan 36 Daily News
Next article
The real estate puncture in the US puts Wall Street in check, is there hope?